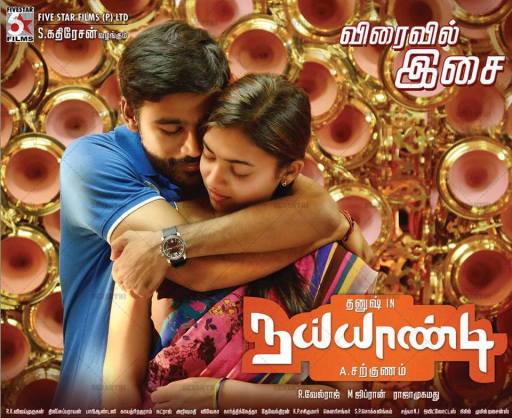 I’m a huge Dhanush fan, so despite the negative reviews it was inevitable that I would make the effort to see his latest film in the theatre.  And to be honest I don’t think it was quite as bad as reviewers have described, although it is still fairly terrible.  Naiyaandi is billed as a comedy and at least for the guys beside me in the cinema it delivered as promised, since they were literally rolling around in their seats laughing.  But I can’t work out if Sarkunam actually wanted to make a comedy or an action masala flick as the film ends up combining aspects of both genres without ever managing to form a coherent whole.  Naiyaandi is more like watching a TV comedy show with a series of skits, some of which work, and some which don’t, interspersed with the odd fight scene.  It does have a few funny moments, mainly in the second half but generally this is one to skip and wait for the DVD.

Naiyaandi begins by introducing Meera Krishnan as a desperate mother trying to find a bride for the eldest of her three sons.  Her dilemma is quickly explained when the eldest son is introduced (Sriman), sporting an impressive paunch and seemingly well past marriageable age.  Matters look almost as bleak for the second son (Sathyan), however there is perhaps more hope for the younger son Chinna Vandu (Dhanush) who is much younger (and thinner) than his two brothers. For some unexplained reason, Chinna Vandu doesn’t live with the rest of the family, but rather lives with his uncle (Imman Anachi) in a small village and spends his time lazing around with his friends.  This also involves mooning after Vanaroja (Nazriya Nazim) who is visiting the village to spend time with her grandmother (Sachu).

On the surface Vanaroja should be fairly sensible; she’s apparently a dentist and comes from a loving and wealthy family, but she has irritatingly stupid habits which make her seem childish and inane, and generally she has the personality of wet tofu.  After a few days of being followed by Chinna Vandu, who uses more and more ridiculous methods of trying to attract her attention, Vanaroja decides that she has fallen in love with her stalker and plans to marry him.  Even though he appears to have no job prospects and she knows little about his family. Seriously – no-one is this dumb – even in a ‘comedy’! 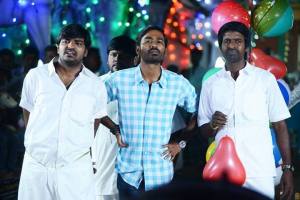 At this point Sarkunam seems to feel that the story needs a villain, so provides one in Vamsi Krishna whose psychotic determination to marry Vanaroja is perplexingly stubborn given that he’s only met her briefly.  However since his sole purpose is to provide a reason for our hero to abscond with the girl, presumably his lack of rationale doesn’t really matter.  Vamsi Krishna does the usual villain shtick, but it’s all very half-hearted and he’s neither menacing enough to be truly evil, or too over-dramatic to be funny. 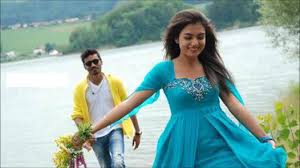 Things do improve in the second half where Vanaroja and Chinna Vandu are trying to hide the fact that they have become married from the rest of his family.  The only way to allow them to disclose their relationship is apparently to get Chinna Vandu’s two elder brothers married off, but this could be more difficult than ever since both brothers have their hearts set on Vanaroja.  Sriman and Sathyan provide some much needed comedy, which generally hits the mark and is actually pretty funny.  Whether it’s Sriman pulling in his stomach every time he sees Vanaroja, or Sathyan trying to get her to read his poetry, the two work well with each other (and with Dhanush) to make this section of the film more entertaining.

Nazriya Nazim doesn’t have much scope, but she is also better in the second half and actually seems to develop some personality as she dodges the two brothers while simultaneously contriving to meet Chinna Vandu in secret. Unfortunately this doesn’t last, and the final scenes are clichéd and ridiculously over the top without managing to raise many laughs. This is the first time I’ve seen Nazriya Nazim but she didn’t impress, although that is probably more due to her uninspiring and clichéd character which didn’t give her any opportunity to make an impact.

To add to the disappointment of an unimaginative storyline, the songs are uniformly terrible with bizarre choreography and obviously shot on a tight budget.  At least that’s the only explanation I have for the cheap and nasty costumes worn by the backing dancers in Switzerland.  Dhanush wears a succession of outlandish outfits which don’t suit him at all, and both he and Nazriya get little opportunity to actually dance.  I can’t decide if this was supposed to be part of the comedy or if the songs were meant to be taken ‘seriously’, but this is where the FF button and the film on DVD would be appreciated.

However, despite the terrible storyline, unfunny dialogue from Soori and Imman Anachi in the first half and nonsensical villain, there are a few things to enjoy about the film – even if only briefly.  Sriman and Sathyan are genuinely funny and the older Tamil songs that accompany some of their deranged imaginings are a good touch.  I did laugh for most of the second half of the film and it does seem better written with wittier dialogue.  Even the fight scenes are better.  Dhanush is fine in his role and always watchable, but the character here doesn’t require him to do anything special and such an unremarkable role is particularly disappointing after his impressive performance in Mariyaan.  Overall Naiyaandi is worth a watch for Sriman and Sathyan and the latter part of the film, but I think I’d recommend waiting for the DVD and judicious use of the FF button.