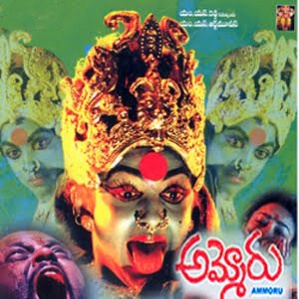 Ammoru is a 1995 film combining mythology and religion with a family drama. Directed by Kodi Ramakrishna, strong performances, a well plotted story and well modulated pace ensure this never gets dull. I like the socio-fantasy and mythological genres and Ammoru has plenty of the elements I find interesting and entertaining.

An entire village is praying to be saved from an illness when a mysterious lady approaches. A kindly woman offers her a meal and shelter after the stranger had been turned away from food dedicated to the deity. In return, the mystery woman makes an infusion of neem leaves and directs the village lady to sprinkle it in front of every house but, whatever she does, not to look back. The stranger will watch over the lady’s house until she returns. Of course she looks, and sees Ammoru in her full glory. Knowing that the goddess would leave the village at the conclusion of the task, the lady kills herself to avoid returning and Ammoru stays and becomes the resident deity. Some years later, the orphan Bhavani is in danger from rapacious Leelamma and her black magic practitioner son Gorakh. Bhavani stopped Gorakh from burying a young girl alive in a ritual to gain his wish so he was not a fan. Leelamma wanted to marry her own daughter off to wealthy Surya, but he married Bhavani to rescue her from Leelamma instigated humiliation. A lifelong devotee of Ammoru, Bhavani is protected time and time again by the goddess. But just when things are at their darkest, Bhavani sends her protector away and compels her not to return unless certain conditions are met. 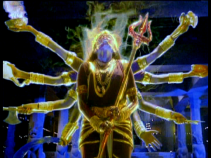 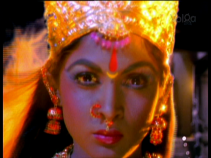 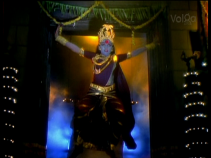 Ramya Krishna dominates as Ammoru although her screen time is limited. Her appearance as the goddess is stunning. The make-up and special effects teams do a great job of making her beautiful yet terrifying, especially when her vengeful nature is stirred.

Also playing an aspect of Ammoru is Baby Sunayana – a preternaturally wise child with a high pitched creepy giggle. I did wonder why no one remarked upon the smoke, coloured lights and echoey vocal effects that often accompanied her, but that is a mere detail. She happily torments Bhavani’s enemies, rarely confronting them directly but making sure their plans go awry. As the little maid, Sunayana is playful but intense with expressive eyes. She conveys maturity and substance despite an unfortunately shrill voice and holds her own in some dramatic scenes with Soundarya. 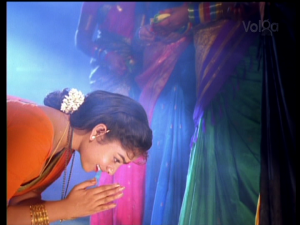 One scene I particularly like is when Ammoru invites her sister deities to attend a ceremonial lunch after Leelamma turned away the intended mortal guests. The goddesses looked matronly and regal and the interplay of everyday and supernatural was striking but not overemphasised. The film often points to a gulf between religious belief and day to day practice. Ammoru is a mother figure, but she is all for tough love. She rewards those who do right and who try to help themselves.

Soundarya delivers an accomplished performance as Bhavani. While the character is a bit dim at times, she has a backbone so there is ample range for the actress to do more than look winsome. She grows from a shy girl to a happy confident new bride who enjoys married life, but when Surya leaves for the USA her in-laws go on the attack. Her baby is targeted and her reputation is in tatters. Undermined and made to doubt her own sanity, Bhavani grows progressively weaker. But when Surya’s life is under direct threat Bhavani throws manners aside and demands Ammoru repay some of the devotion she has been given over the years.

Soundarya transforms from meek to angry and demanding without seeming a caricature. It is a pity that Soundarya died young as she had the ability to play such a range of characters and emotions that her career should have been long and interesting.

But this is by no means a feminist film. Men still rule the roost, with Surya (Suresh) casually disregarding Bhavani’s preferences and generally ordering people about regardless of whether he knew what was going on. He also demands proof before offering obeisance to heaven, which is unwise I think when dealing with a goddess who claims Durga and Yellamma among her names. A girl who is almost raped is told she has to marry the rapist as that is the only way to preserve her honour. 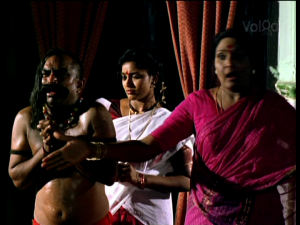 The fact that her own mother set the attempt up but intended Bhavani to be the victim did quell a little of my outrage. As did the bizarre sight of the near victim mopping sweat off her attacker with her chunni. And his complaint that he had already raped two women that day so he was a bit tired. As she is a low caste orphan, no one except the old priest takes Bhavani’s situation seriously.

Rami Reddy plays the vile Gorakh with uninhibited nastiness. He is driven by overwhelming greed for wealth and power, and uses black magic as a means to that end. He is protected by an evil spirit and believes he is invincible. He was certainly hard to get rid of, surviving many a setback including having his head set alight. His mother Leelamma (Vadivukkarasi), despite having no paranormal tendencies, is even worse. She knows exactly what she is doing and feels no compunction at belittling and torturing Bhavani in an elaborate scheme to separate her from Suresh. While the baddies planning skills are a bit suspect there is no doubt about their commitment. Kallu Chidambaram is a hapless and occasionally demonically possessed servant and Babu Mohan rounds out the family.

The soundtrack is also very effective (despite that child’s playback singer’s voice). This isn’t a big song and dance film, the music is used mostly to create or enhance the atmosphere. 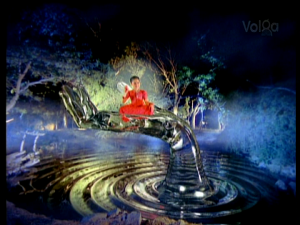 The production design is great and the village scenes are pretty but not too sanitised. The effects used for Ammoru’s interventions and her manifestations are surprisingly good for 1995. Some scenes look a bit cut and paste but the effects budget was used wisely for the big impact moments. I think it helps that the things depicted are not just everyday objects and incidents, so artistic leeway is available for how power is illustrated.

While I don’t like some of the plot points, Ammoru compensates with excellent actresses given room to shine, and strong visuals that help tell the story. The story is gripping at times and while I could guess at the ending, I didn’t see all the twists and turns coming. Highly recommended. 4 ½ stars!