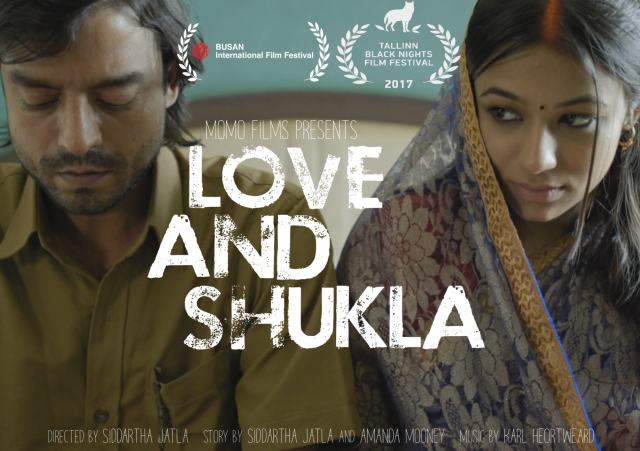 So many films end with the wedding and a vague hand wave in the direction of “ever after”. Siddhartha Jatla starts with the wedding and then challenges really begin, with the household and marriage.
Note: I was given the opportunity to see Love and Shukla by the director. Nobody associated with the film has made any requests for editorial approval or even to know what I might write, or if I chose to. You have to love this very connected world where people can find an audience on so many different platforms.
Shukla (Saharsh Kumar Shukla) lives in a cramped one room home with his drama queen soapie addict Ma (Aparna Upadhyay) and near silent father (Loknath Tiwari). His parents arranged his marriage and his friends do that drunken bloke thing of scaring him with stories of disaster if he can’t sexually satisfy his wife. Laxmi (Taneea Rajawat) moves in to the house, and to Shukla’s dismay he never gets a moment alone with her. His Ma immediately starts with every mother-in-law cliche and bosses Laxmi around. Laxmi is obedient and almost silent. And when sister Rupa (Hima Singh) leaves her husband and moves back in, there is even less space, physically and otherwise. Will they ever get together on any level? How can anyone conduct their private life in full public view? If you marry a stranger, how do you find the space to get to know them and build a life together?

Saharsh Kumar Shukla delivers a nicely calibrated performance. He’s a reserved guy, unless drunk, and has observed many passengers in his auto and their various relationship issues. Shukla is keen and anxious about sex but he’s also interested in who Laxmi is and what she’s really like. He’s aware despite his bravado in front of his mates that watching porn is not actually good research. He wants intimacy, so much more complex than just scoring a quickie behind the wall of suitcases his dad placed for their privacy. He’s delightfully awkward as he goes shopping to buy her presents, giving serious consideration to different shades of nail polish. Taking Laxmi to a hotel for some privacy turns to disaster as the local cops raid his room, thinking that she must be a prostitute because no man would ever pay money to spend time with his wife. There’s a sense that he wants to be understood and be loved, so he gets that she probably feels the same.

Taneea Rajawat looks lovely but I spent quite a lot of the film wondering if there would ever be a resolution for her character or would she just go from being a mute slave of Ma to a mute slave of Manu. But despite not having a single line of dialogue for almost 30 minutes into the film she conveys an awareness of Shukla and a reciprocal interest in getting to know him. She’s passive but not averse to his fumbling attempts, and she lights up when he shows her particular consideration. I admit to being a little disappointed when Laxmi started speaking because she is quite dull. And finding out her favourite actor was another question mark! But her relief and delight in finally being allowed to voice her opinions was quite sweet, as was Shukla’s happiness at having a simple conversation.
Aparna Upadhyay and Hima Singh are a little over the top and rely on being loud and louder, but their characters were emotionally tone-deaf so if they were out of synch with the rest of the ensemble it wasn’t necessarily a problem. Ma and Rupa are so self absorbed they don’t seem to have any awareness of how hypocritical they are. Both bemoan Rupa’s treatment by her mother-in-law and in the next breath, order Laxmi around as a servant. Shukla eventually calls his mother out on her behaviour and while it is satisfying that he does so, the scene goes on for far too long. But I enjoyed seeing family dynamics changed by Laxmi’s presence although Laxmi herself never challenged anything. Loknath Tiwari may as well have been a painting, both his character and his performance merged into the background. The gaggle of friends played by Amol Deshmukh, Shanawaz Alam and Ganesh Kumar are types rather than fully fleshed out characters, but they help Shukla by giving him an outlet to articulate his irritation.
I like films with a strong sense of place, a feeling of a fully realised world. Jatla creates a neighbourhood, full of the detail of how people live cheek by jowl and how they afford each other the small courtesies that stand in for privacy. The domestic scenes show much without resorting to telling. There are some darker moments and the dog eat dog life in a big city is only a wrong step away.
While this is largely Shukla’s story, the female characters are given their dues and are not overly sentimental or idealised. It’s an engaging and thoughtful look at relationships and the concept of a private life with no privacy. Hopefully this will get a wider release following the festival circuit. Do keep an eye out.

3 thoughts on “Love and Shukla”