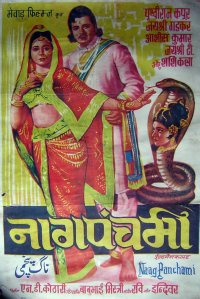 Perhaps as an omen of the awesomeness which is to come, the film opens with some excellent snake animations which include a very snakey title. Love it!

This film is a feast for costumes lovers – every outfit seems to have extra glitz, glamour and shine with some really amazing fabrics and accoutrements. Just look at these bodice designs – very apt for the snake goddess and her poisonous serpent sidekick: 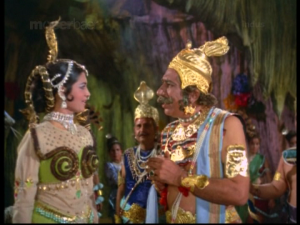 And just for some variation, later on Goddess Mansa decides to try out a fish theme with a wonderful headdress.

But there are also plenty of real snakes throughout – not just on the costumes – although the film seems to use a combination of some really quite bad model snakes interspersed with the real thing. These are some of the real ones.

Naag Panchami starts with the rather petulant Snake Goddess Mansa having a bad day. It’s her birthday but she is restless and irritated by her followers in Naglok. Fortuitously Nagraj turns up and she manages to cajole him into revealing the name of her father, who is none other than Lord Shiva. Mansa is thrilled by this news and immediately goes to see her father who takes her to meet her mother and siblings in Khailash. Once there she discovers the existence of ‘the rest of the world’, and decides she wants to be worshiped just like Shiva and the other Gods. To achieve her aim she decides to make Lord Shiva’s chief devotee Chandrakhar her worshiper too, and to that end she appears to him on board his ship and demands his instant worship. But the successful merchant is unimpressed by Mansa and reviles her for her arrogance and presumption.

Various ploys by Mansa to force his worship fail to work and finally she kills all six of Chandrakhar’s sons. Mansa seems to work on the theory that the more insane her actions, the more likely it is that Chandrakhar will devote himself to her, which of course is guaranteed to have the opposite effect entirely. Lord Shiva very wisely declines to get involved so the scene is set to allow Mansa to do her worst.

As part of her long term plan she then approaches Chandrakers wife Alta and gifts her with another son – not really a lot of consolation for the lost of the last six, but then that’s not her ultimate plan. Rivers flow, birds fly and suns set as he grows up incredibly fast to be the handsome and dashing Lakshmindra. Lakshminda crosses paths with the equally daring and beautiful Behula when she is out hunting. Naturally the two fall in love and in next to no time determine to marry.

Meanwhile, Mansa’s chief handmaiden Maithreyi has also married and as husband and wife are cavorting in the forest, Lakshmindra inadvertently runs over her husband in his chariot, killing him instantly.

Unaware of this fresh disaster Lakshmindra is now under threat of death from both Mansa and the vengeful Maithreyi – a situation with plenty of snakey potential. It all becomes very Sleeping Beauty-ish as Mansa turns up to the engagement and threatens Lakshmindra with death on his wedding night. Queue evil laugh Mwah ha ha ha!

Even Maithreyi is starting to look a bit worried! To protect his son, Chandraker orders a house to be built of iron to ensure that nothing will be able to enter and kill his son. Now I would have thought that an iron house would be quite impractical , hot in summer and hard to keep warm in winter, and not necessarily the only way to keep snakes at bay. Nevertheless, the newlyweds end up in a supposedly impregnable house on their wedding night. Except of course it isn’t. Maithreyi turns up to seek her revenge, but Behula is resolved to save her husband and manages to convince Maithreyi not to kill Lakshminda.

Sadly though, after Maithreyi leaves, neither Behula nor Lakshmindra think to bung up the hole in the wall and Mansa sends another snake which does manage to complete the job. Not one to be easily defeated, Behula resolves to carry her husband’s corpse on a pilgrimage around various temples in order to revive him. While on her quest, Mansa assails Behula with many really bad special effects including a huge crocodile and lightning induced blindness just to name a few.

We also get to see that not all snakes are bad, or at least not all the time, as Maithreyi turns up to help Behula in her snake form, towing the body to safety and waking Behula up with a nicely placed spray of water. I really do think all of this would have been much easier to accomplish as a human, but probably nowhere near as much fun to watch. 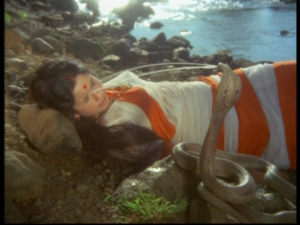 I really enjoyed this film. The costumes are wonderfully sumptious and there is just oh so much evil that Mansa manages to accomplish. The songs are fantastic and with playback singers Asha Bhosle, Kishore Kumar and Lata Mangeshkar and music by Ravi it all sounds beautiful. There is even a great snake dance by Maithreyi as Mansa looks on in her fab fish ensemble – already mentioned by jenni, but I think it deserves to be seen again.

The snakes here do conform pretty much to the standard in the Filmi Snake Spotters Field Guide. There is the less is more approach to clothing, plenty of embellishments and headdresses, great eyes and plenty of snake inspired architecture to pose with. Mansa also has the ability to conjure snakes whenever she is feeling annoyed with someone and flings them around with gay abandon. She becomes more and more maniacal and Shashikala is wonderfully crazy, changing from self-indulgent and immature one minute to totally malevolent and insane in the next.  Her eyes get wider and wider and she is definitely a master of ’the look’. She even talks to herself. 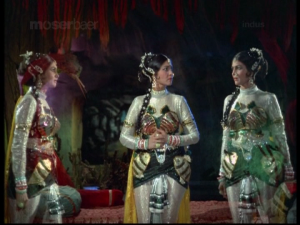 Maithreyi (Jayshree T.) is much less vengeful despite losing her husband, and a much nicer person snake all round. Hers becomes the voice of reason which Mansa of course totally ignores.

Jayshree Gadkar is lovely as Behula. She invests her with grace and determination and plays the devoted wife perfectly. Out of her lavish costumes as the princess she looks beautiful in her plain sari when she is making the pilgrimages around the various temples. The other actors are all fine but are mainly just there as targets for Mansa. Prithviraj Kapoor is suitably imposing as the rich merchant, and Ashish Kumar does a good job as Lakshmendra. Satyendra Kapoor has a small role as Lakshmendra’s friend Vishwavardhan and makes the most of it.

The end involves various Gods and Shiva dancing to shake the world – yet more excellent costumes and ‘bad enough to be really good’ special effects. This is so much more than just another snake movie and I’m rather surprised that it doesn’t seem to have the recognition I think it deserves – if only from aficionados of shiny fabric and bejewelled headdresses. A great film for Nag Panchami Film Fessstival  I love it! 4 stars.