Aa Naluguru is a quirky little film about the rather unbelievably good Raghu Ramaiah and his rather unbelievably bad family. According to my subtitles, the four people of the title are those four people in your life that you must look after so that they will be inclined to carry your coffin after you die – quite a sensible idea really. However as the film unfolds it seems that it may also refer to the four members of Raghu Ramaiah’s family who make his life so difficult, or maybe even to his four friends and co-workers who also have a large influence on him. The film is a little slow to start and perhaps overly moralistic, but succeeds for me mainly due to fantastic performances by Rajendra Prasad and Kota Srinivasa Rao.

Raghu Ramaiah is an editor who is a great philanthropist, giving half of his earnings to his wife and children and the other half to the poor.  He is very idealistic and believes that nothing is as important as love and compassion which means that he is constantly fighting against the corruption, greed and intolerance he sees every day in his community. His best friend Subrahmanyam (Subhalekha Sudhakar) has no such problems. He pays bribes and seems content to ignore the injustices he sees around him. Raghu Ramaiah’s other friend is the miserly money-lender Kotaiah who is happy to tell everyone that his only interest is money, and is a man so mean that he rations absolutely everything at home. 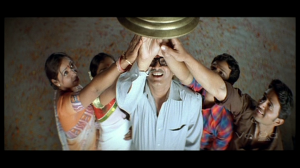 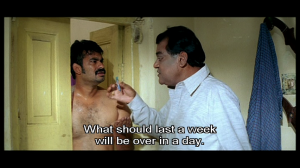 We meet Raghu Ramaiah at the end of his life, when two demons pop up in his bedroom to take his soul to hell.  This was just a little unexpected – firstly because I hadn’t expected a mythological aspect to the story but secondly why take his soul to hell when he had led such an exemplary life – or then again had he? Raghu Ramaiah turns out to be a little vain at any rate as he wants to be able to watch the mourners at his funeral. He successfully pleads with the demons to be able to stay longer on Earth, but this turns out to be a mistake since no-one seems to mourn him at all. As the demons ridicule him for this lack of affection from his family and friends he shows them scenes from the last few months of his life which explain the reaction to his death.

His children are all only concerned with money as they think this is what they need to achieve their selfish wants and desires. The eldest son Shekar (Raja) wants to become an SI in the police, but although he has passed all the necessary exams he finds that he can only get the job by paying a bribe.  Chinna, the younger son, wants to bribe a University to accept him into an Engineering course since he hasn’t got good enough grades to be accepted on his own merits.  Indra and her husband want to leave and start a new life overseas as he has no job, and doesn’t seem to be particularly worried about getting one.

They all keep pressing their father for money while he insists that they should be able to get by on their own merits, and in particular not pay bribes just because everyone else does.  However Raghu Ramaiah’s ideals are not accepted by his family and finally his son-in-law decides to capitalise on his father in law’s good name and start a finance company to cheat people.  This is the last straw, and Raghu Ramaiah finally breaks down at this threat to his reputation.  He borrows money from his friends and uses this to pay his children what they feel they are owed. After he dies, his sons and his son-in-law run away to avoid having to pay back the money their father has borrowed. 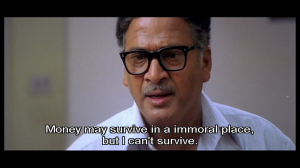 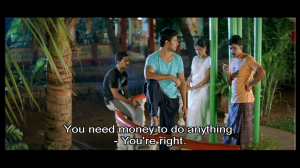 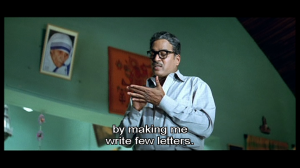 There is a great moment when medics come to collect Raghu Ramaiah’s eyes which he has donated, although this also brings to light the true circumstances of his death. But a story that involves eye donation is always a plus for me.

The rest of the film deals with the funeral and I have to say that no matter how many times I watch this film, the final scenes always make me cry. The simple outpouring of emotion at the funeral is very well done, and the grief in the loss of a man seen as a great humanitarian is very heartfelt.

There are a few problems with the story, written by Madan and the director Chandra Sidhartha. Raghu Ramaiah seems to be a very idealistic representation of a compassionate man and the story initially is very simplistic and moves slowly. It’s understandable that his family is frustrated with his overly charitable nature, although their demands for money and general lack of respect also seem unrealistic. Perhaps the director found this necessary to get his point across, but I think the same points could have been made more subtly. I don’t believe that anyone could be so overly benevolent to the detriment of their own family or adhere so rigidly to such morals. However while these flaws could have made Raghu Ramaiah very one-dimensional, Rajendra Prasad rounds out his character with a really fantastic performance. The interactions with his family are very well portrayed with a mixture of frustration, love and anger giving a more naturally human feel to the character despite the rather stilted language. Of course that could be the fault of the subtitles. Still, without the presence of Rajendra Prasad I don’t feel that this film would have had the same impact at all. Kota Srinivasa Rao is excellent as the miserly Kotaiah and the interaction between these two characters is the best part of the film. Aamani was good in her portrayal of the wife stuck in the middle, trying to keep everyone happy and failing, and it was interesting to see Raja in a more negative role.

While there aren’t very many songs in this film, the slow and sad version of the title song is used frequently as a background theme. But this fast version at Indra’s wedding does have some dancing at least.

Despite the problems I have with the story and the somewhat idealistic characterisations, the performances more than make up for these shortcomings for me. This is a film I’ve watched a number of times and still love the ending.  A film made by the performances and emotional final scenes and as such gets 3 1/2 stars from me.

I hate this film. I can’t decide if it is an amateurish attempt or a deliberately manipulative effort that insults the intelligence of the audience. I do need to discuss the plot as it is the supposed ‘twist’ that particularly annoys me, along with some poor writing.

I will leave a gap.

Now if you want to avoid the spoiler, keep scrolling until you see the next puppy.

Raghu Ramaiah committed suicide. He did this with no real sense of crisis apart from his customary self pity, and just after borrowing loads of money from various friends and associates. His death effectively dropped his family and friends in a hole as the loans were a bit shady and his wife had no means of repaying them. The grown up children were presented as selfish caricatures, constantly shocked by their father’s decisions (they were also slow learners – I mean, he NEVER didn’t put charity first). Surely he wouldn’t have expected them to look after his widow properly. He abandoned his philosophy and his vows to his wife in what was portrayed as a fit of pique. Now, this is a shocking action for a holier-than-thou too-good-to-be-true philanthropist so I was expecting some unfolding of his character or past that would illuminate his choice. None was forthcoming. He sat on his cloud, hoping to see how much he was missed and trying to hide the truth from his demon companions. This vanity and selfishness might also have made for interesting character development but was brushed aside. Chandra Sidhartha decided to make this man a role model and have everyone awash with tears at his funeral. So is the take out from this, kill yourself if people disagree with you and then they’ll all be sorry? None of it held together for me as there was insufficient motivation for him to drink poison and no satisfactory exploration of the repercussions, followed by a glorification of a very flawed and slightly unpleasant character. The sickly sentimental ‘boo-hoo we’re not worthy of such a great man’ ending was infuriating.

OK so now I have that rant out of my system. Rajendra Prasad did give a good performance. I was really hoping that a movie featuring the actors who are usually in supporting roles would be good as it is lovely to see them take the spotlight for a change. The scenes between Rajendra Prasad and Kota Srinivasa Rao are effective, and Rohit and Aamani were good in their supporting roles. I give this 1 star, only because some of the actors tried really hard.