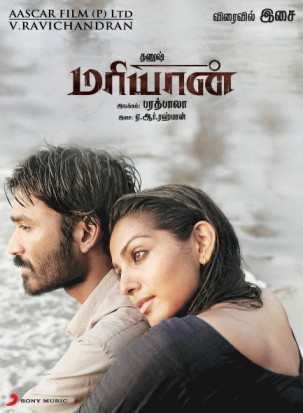 Finally! It has been a long time since 3, but the wait has been well worth it. Dhanush is back in Maryan, a movie that sets out to prove that true love really can conquer all even if you were a bit iffy about that true love at the start. This is the debut film for writer/ director Bharat Bala and while generally he does a great job, there are times when the screen play lags a little, and the focus on desert imagery resembles a National Geographic special. However, superb performances from all the cast and A. R. Rahman’s wonderful soundtrack combine to ensure that Maryan is a film to savour. Plus English subtitles – perfect!

The film starts with Maryan (Dhanush) working in the Sudan for an oil company, where his love for Panimalar (Parvathy), his fiancée waiting at home in India, is perfectly captured by a brief phone call. But it hasn’t always been that way, and the film switches into flashback to explain just who Maryan is and how he came to be working in Africa when he is so obviously yearning to be home.

This first section works very well, where Panimalar is seen as a lovelorn girl, chasing Maryan endlessly despite his disdain and often brutal rejection. Maryan is a fisherman who hunts in the traditional way and has developed amazing lung capacity, allowing him to remain submerged for longer than the other fishermen. He calls himself the king of the sea and obviously has an intimate relationship with the ocean which is really the only thing he cares about. Dhanush effortlessly establishes his character as a brash, arrogant young man who has his faults but is generally likeable and can dance up a storm.

Slowly Maryan comes to appreciate Panimalar’s charms helped along by the active encouragement of his best friend, Panimalar’s brother Sakkarai (Appukutty). Dhanush and Parvathy play their roles perfectly here and the romance is expertly developed with an eye to small town sensibilities. Parvathy has a better than usual role as a heroine and she makes the most of it, using her eyes and body language to express her feelings as she establishes Panimalar as a feisty girl determined to get her man, no matter what it takes. There are a few funny scenes between her and her future mother-in-law Seeli (Uma Riyaz Khan) which work very well, and both Parvathi and Appukutty are to be commended for the way they manage to establish their sibling relationship so well in a few brief scenes.

Despite the excellent chemistry between Maryan and Panimalar, there are a few miscues and the amount of violence Panimalar experiences at the hands of her beloved appears quite unnecessary. The initial slap when Maryan is frustrated by Panimalar’s persistent attempts to declare her love is perhaps understandable, but later scenes including Maryan saying, “Who else will I hit if not you?” are sadly all too common in Tamil films. I understand that this does depict real life where domestic violence is an ever present problem but I wish directors would use the characters to show that it’s just not acceptable rather than brushing it off as an apparently appropriate way for a character to show their distress.

Maryan is forced to work in Africa to pay off debts incurred by Panimalar’s father Thomayya (Salim Kumar) and prevent her forcible marriage to Theekkurissi (Vinayakan). However just as Maryan is on the way to the airport to come home, he is kidnapped by Sudanese militants who hold him, his friend Sami (Jagan) and a fellow co-worker for ransom. While the African militants are poorly drawn, being caricaturised and frequently over the top, Dhanush and Jagan are both brilliant as they show their gradual mental and physical deterioration at the hands of their captors. There are some scenes here that are frankly uncomfortable to watch due to the sheer honesty of Dhanush’s performance and although this type of mental anguish is a role he has portrayed before he takes it to an entirely new level here. Jagan also seems perfectly cast as Sami, and his change from happy-go-lucky guy to terrorised victim is well portrayed.

Despite all the drama, the film does drag a little in the second half. After all there are only so many times you can show someone running up a sand dune before it gets a little repetitive, but the hallucinations (yay – cheetahs!) and Maryan’s determination to make it home to Panimalar help keep things moving long. There is also a lack of hair continuity for Dhanush which is irritating considering the care which has obviously gone into the rest of the film. One good point is that Panimalar doesn’t do a disappearing act in the second half and the film does cut back frequently to show her initial despair and then fervent belief that Maryan is coming back to her. Parvathy is impressive in these scenes and her performance really is on a par with that of Dhanush.

Technically the film looks and sounds beautiful. I’ve been enjoying A.R. Rahman’s soundtrack since it was released and the songs are even better on screen. The only one that doesn’t work so well is ‘I Love My Africa’ which has poor justification and picturisation but on the whole the songs are well placed in the narrative. I often don’t notice the background score on the first watch of a film, but here it is sweetly evocative and the natural music of the ocean and the desert are added in for haunting effect, adding to the magic of the images. The excellent cinematography by Marc Koninckx perfectly captures coastal Tamil Nadu and the deserts of Africa, highlighting the contrasting light of the two locations and make the landscape just as much a feature of the film as the actors themselves. 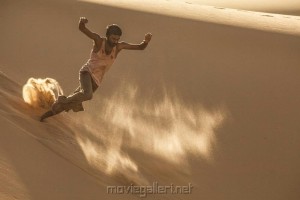 Maryan is a film to watch for yet another amazing performance from Dhanush and equally impressive acting from Parvathy, while beautiful imagery and evocative music add to the overall effect. Even if the action part of the film doesn’t work quite so well, the love story is charming and inspiring. Watching Maryan you have to believe that true love really can conquer all and that’s a very heart-warming message to take home on a cold Melbourne winter night!