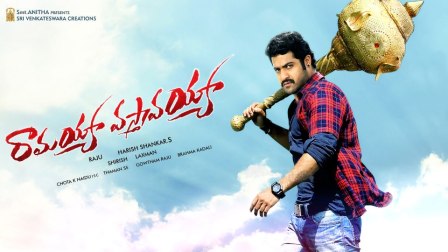 It seems like a very long time since the last NTR Jr. film and since I read some speculation about Tarak’s ‘new look’ I was interested to see exactly what Harish Shankar had come up with.  However the ‘new look’ is really just the old look, except for the odd moment on horseback which I admit was pretty cool.  And there were some groovy new shades.  But otherwise Ramayya Vastavayya sticks to the same old formula with the usual faces reprising roles they have played a million times before. Ultimately not even the actors seem to be able to rustle up much enthusiasm and although Tarak and Samantha both work hard and deliver good performances, the film is still let down by the clichéd storyline and stereotypical characters. 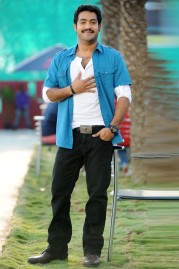 The first half of the film is generally entertaining since it focuses on the developing romance between Nandu (NTR Jr) and Akshara (Samantha).  The romance aspect was perhaps enhanced by the fans behind throwing rose petals along with the usual strips of paper, but at least it made for a pleasingly more fragrant trip back to the old Chinatown cinemas in Melbourne.  As I’ve come to expect (yawn), Nanu sees Akshara one day while hanging out with his buddies at a coffee shop and falls instantly in love.  Akshara is not quite so sure and the ensuing comedy as Nandu tries to win her heart with a variety of schemes is amusing enough to overcome the usual discomfort of the’ stalking = true love’ theme.

Rohini Hattangadi pops up as an aunt of some sort to Akshara and her older sister and although her role is small and fairly gratuitous she still steals the limelight every time she appears.Presumably to appeal to a wider audience, there are numerous references back to classic films, the most blatant being Tarak’s entry scene.  Most of these are fairly obvious and seem contrived to ‘fit’ into the storyline, and I’m sure there are more that I missed (hopefully more subtle) by not understanding the dialogue.

Samantha looks gorgeous and there is only one attempt by the notorious Telugu shoe designer to make her look ridiculous so I’m presuming she must be a favourite with wardrobe.  However, Akshara is a standard Telugu heroine, whose only purpose is to make the hero look good and is otherwise completely one dimensional, which seems a complete waste of Samantha’s talents. Still, she does get to dance and there is good chemsitry between Samantha and NTR Jr. which makes their interactions more enjoyable to watch.

Tarak’s Nandu seems a fairly typical hero – there are the requisite commanding dialogues laced with a modicum of modesty and comedy, excellent dancing skills and the ability to defeat numerous opponents by the mere flexing of a muscle or two accompanied by a snarling grimace.  As always, Tarak delivers exactly what is expected of him with plenty of animation and charisma, but since he’s playing the same character he has played in his last few films it feels stale and completely predictable.  The only really up side are the songs which feature better than usual choreography and excellent dancing from both Tarak and the backing dancers.  I loved the addition of spectacles as part of the costumes for one of the songs and the music by S. Thaman was generally catchy and effective, and at least better than the recent crop of new releases.

After the interval, Nandu moves on from bouncing people off wall, floors and sundry items of furniture to hacking people apart with increasingly bloodier and even more poorly choreographed fight scenes.  I’m not sure who is responsible for the action for Ramayya Vastavayya, but they seem to have taken inspiration from episodes of Tom and Jerry rather than anything that remotely resembles a feasible fight scenario.  The gore content rises but it’s so ridiculous that even the various severing of limbs has little impact, particularly since the fights are so obviously staged and formulaic to begin with. 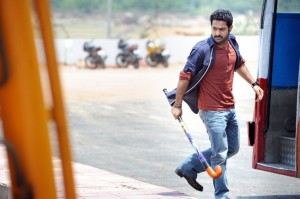 The second half also moves the action to the countryside for Akshara’s sister’s wedding and attempts to explain the antipathy between Akshara’s father Nagabhushanam (Mukesh Rishi) and two assassins (Ajay – yay!) who tried to kill him at the beginning of the film.  This involves a lengthy flashback with Shruti Haasan as Nandu’s previous fiancée Amullu, but it’s dull, overlong and Shruti and NTR Jr. have absolutely zero chemistry together.  To make matters worse, P. Ravi Shankar appears as a stereotypical evil and lecherous politician with mannerisms straight out of the ‘Villains for Dummies’ handbook and, inevitably, Kota Srinivasa Rao appears as his equally evil father. Doesn’t he ever get tired of playing the same role?  Adding to the stereotypes, Tanikella Bharani appears as Amullu’s father, Saranya Ponvannan as her mother and M.S. Narayan briefly appears in a throwaway role which adds absolutely nothing to the plot.  Harish Shankar tries to evoke American crime shows by tying together moments from the first half with explanations later in the film, but it looks clumsy and is generally ineffective. 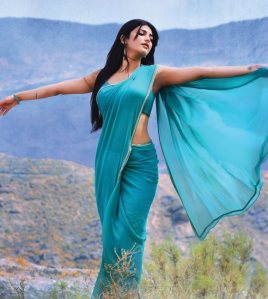 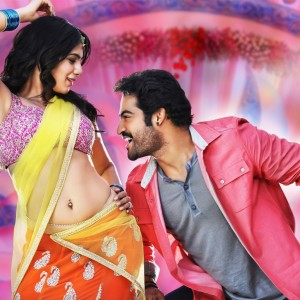 Ramayya Vastavayya disappointingly doesn’t cover any new ground and Harish Shankar sticks to a very well-worn formula without adding anything novel.  With such a tired screenplay and an abrupt change of pace in the second half, it’s really only the songs that appeal despite generally good performances from the actors.  NTR Jr. is as good as ever, but even with his energy and the appeal of two heroines Ramayya Vasthavayya is really a film solely for the fans.  Still, it’s worth watching at least once for the dancing, which is excellent and much better than the film deserves.