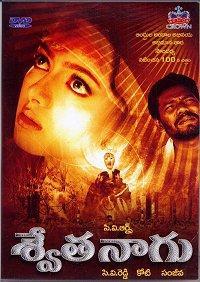 Sweta Naagu was initially mentioned in a comment (thanks mm) and the idea of a film featuring a specially trained white snake was intriguing. Sadly though, it’s a fairly average snake movie that suffers from a surfeit of ideas which all muddle together to make a rather dull film. There are however a few good snakey moments and a rather memorable snake dance so it is worth adding in to the Nag Panchami Film Fesssstival.

The film starts with Madhumati (Soundarya) handing in her thesis on snakes to her professor. I have to say she wouldn’t get very far with her thesis at my university – where are the three bound copies with the title on the side – hm? At any rate Dr Parthasarathi seems very impressed by her work as she has investigated snakes as, well, snakes, rather than as mystical powerful beings. 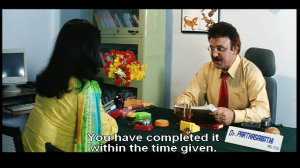 Madhumati is very much the scientist, pouring scorn on her mother as she celebrates the Nagachaturthi festival and is dismissive of her mother’s ideals and beliefs. So naturally Madhumati is appalled when she sees a TV interview with Dr Parthasarathi, where he discusses his belief in the divinity of snakes. Shocked, she confronts him and demands an explanation. The best he can come up with though is a ‘personal versus professional opinion’ argument which is really rather weak. He does become more decisive later on, but the initial impression isn’t one of a confident and scholarly ophiologist. Instead he comes across as patronising and smug, and to add to his general ineptness, he can’t draw snakes! 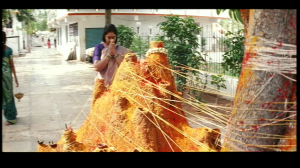 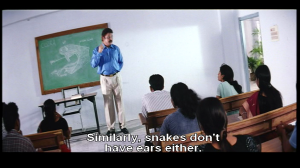 Madhumati says that she will believe in the divinity of snakes only if she has hard evidence. So her professor tells her about the sacred texts called the Nagashastras which contain all the evidence she wants, although how he knows this is rather questionable since these Nagashastras are hidden somewhere in the Kollimalai forests and no-one who went looking has ever returned. Madhumati is on a quest though, and determines that she will be the one to find the Nagashastras and maybe get a better grade in her thesis as a result.

Once in the forest Madhumati is immediately and rather fortuitously captured by the tribe that have the Nagashastras in their keeping. They are snake worshippers and have a chief who believes in the power of animal print fabric. 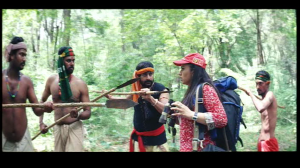 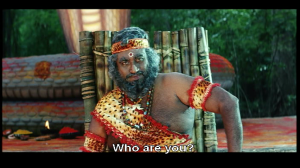 The sacred texts are guarded by a snake which for some reason seems to approve of Madhumati despite her attempts to get her hands on the texts and her often stated belief that snakes are just reptiles. The guardian snake appears to Madhumati in human form to warn her that it is in her best interests to leave as soon as possible. We know from jenni’s excellent guide as soon as Madhumati opens the door that Vaasukhi is a snake since she has the required less clothing and oodles of eye make-up. However, just in case we were a bit slow to catch on (like Madhumati) the hair is a bit of a give away. 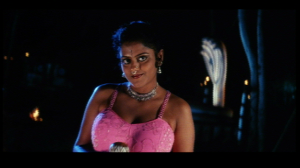 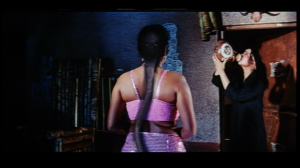 With this sign of favour from the local goddess, Madhumati is able to stay and continue her attempts to steal the Nagashastras. As a bit of a diversion, there is a strange tradition in the village that for any man to marry a woman he has to be able to beat her in a wrestling match. This gives us the only fight scenes in the film which are between local girl Chevandi and her suitors. Chief among these is Singam who finally does succumb to her kicks and body slams, recovering in time to be able to get married. This involves a ceremony at the Nagashetram where we first get to see the white snake as it blesses the happy couple. 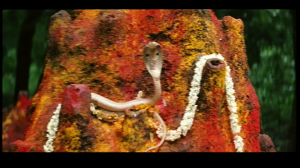 After the party a swami shows up and determines to prove to Madhumati that her belief in practicality and facts is misplaced despite her total rejection of him. He brings the white snake to him with his powers and Madhumati is suitably impressed. However as she steps out of his sacred circle, the snake suddenly turns and spits blue venom at her, which sets a small tree on fire. This rather disturbs her, although it seems to be more the personal attack that she is shocked by rather than incendiary venom. We learn by flashback that in a previous life, Madhumati killed a snake and the white snake now wants revenge. The swami gives her a sacred thread to protect her from utter calamity, which sounds rather useful until, as events unfold, we realise that perhaps his idea of utter calamity isn’t quite the same as Madhumati’s. 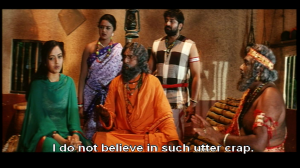 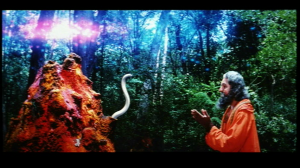 After trying to set her on fire, the snake next tries to woo Madhumati and turns up in a dream sequence/snake dance ‘item number’ as a Freddie Mercury clone in tight white singlet and red track-pants before changing into gold lame and black pleather. We know he is the snake as he has blue contact lenses and iridescent clothing as, but he’s just not very snake-like otherwise. The backing dancers however show great dedication to the art of the snake dance and are actually pretty good if not totally co-ordinated.

Before the dream sequence can lead to anything untoward, Madhumati is called back to the city. Here, the snake starts to truly plot revenge, appearing to her in the guise of her fiancée and popping up in unlikely places around the house. Since this leads to Madhumati crying and yelling ‘snake!’ every few minutes her family eventually take her to see a psychiatrist. His useful diagnosis is that she will be fine if she gets married and has something else to think about. Can it get any more ridiculous? Yes – at this point the white snake gate crashes the engagement and ends up killing Madhumati’s pet dog, while Pravin’s family disown him for allying himself with a woman who doesn’t believe in the divinity of snakes. As a final stroke of genius, the professor organises a conference where Madhumati can tell the world about her experiences and reveal the true nature of snakes – as spelt out below.

Snake are however vindictive, vengeful and able to impersonate anyone, so the white snake is able to totally derail the conference. There is then no other option but for Madhumati and her family to head back to the forest and find the helpful swami to solve the problem once and for all. 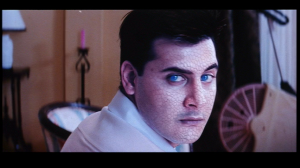 There are just too many ideas in here and as a result the plot gets messy and confusing. Writer Lalla Devi seems to want to add in as many snake film clichés as possible and it just doesn’t work. If the film had stuck to either a single reason for snake revenge or a science vs. divinity plot it might have made more sense, but the combination just doesn’t have a clear path to follow.

Soundarya is the best thing about the film, and she really works hard to make her character as convincing as possible. Abbas plays the role of Soundarya’s fiancée Pravin and is good when he actually has something to do. But his character has only a very small role and he tends to be overshadowed by Soundarya when they are on screen together. Jaya Prakash is fine as the village chief and seems to enjoy his role while Sarath Babu does what he can with the rather stupid professor.

There are some good lines in the film about science and divinity but they get obscured by the muddle of a plot. Also annoying and totally unnecessary is a comedy track involving the family cook and a thief who stole the cook’s money. This does at least provide a reason for Madhumati to have an escort to the forest but otherwise is just distracting. There is also a comedy scene with Brahmi during the snake conference which again doesn’t add anything to the plot and could very easily have been skipped. The side story with the romance between Chevandi and Singam is one which does work relatively well, but gets cut short, again to accommodate yet more unfunny comedy. The romance between Madhumati and Pravin is also skipped over very quickly and more detail of their relationship would have helped to explain why he was willing to defy his family over her. If only they’d concentrated more on the human relationships of the main characters and less on the comedy side-kicks this would have been a much more engaging film. 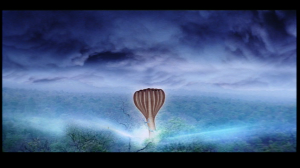 The effects generally work and the final face off between the white snake and the village snake goddess is a reasonable conclusion, although it’s still just a bit dull. The white snake is unusual though and it’s a nice change to have a snake seeking revenge as a man. Sweta Naagu gets 2 ½ stars, mainly for Soundarya and the white cobra.