The first Kannada film I saw in a cinema was Ugramm, where I loved Prashanth Neel’s style and approach to story-telling, so it is reassuring that he has kept to a similar form for his latest epic KGF. The violence is bloody and excessive, the story ultra-masculine but with plenty of reference to the importance of mothers and the soundtrack is an important part of the film. But KGF has a grandeur and magnificence that comes with working with a larger budget and with a number of the Kannada industries top talent involved, KGF is an impressive venture indeed. There are a few issues, the lack of a decent female lead and some OTT and excessively dramatic dialogues for example, but Prashanth Neel has kept his eye firmly on the story, making KGF an excellent addition to the world of Kannada action cinema.

The film uses a framing device where TV journalist Deepa Hegde (Malavika Avinash) interviews ageing reporter Anand Ingalagi (Anant Nag) about his book, which was banned and burnt by the government of the time. Prime Minister Rimika Sen decreed that all mention of a certain ‘criminal’ should be wiped from history but Anand is prepared to share the story, although he jumps around in time which adds a non-linear aspect to the tale. In this way, Anand acts as a narrator of events, which span from 1951 to the present day and start with the seizure of land rich in gold by Suryavardhan (Ramesh Indira). Suryavardhan clears the land and establishes an illegal gold mine, worked by slaves and disguised as a limestone works. At the same time, local villager Saraswathi (Archana Jois) gives birth to a son she names Raja Krishappa Bairya who later becomes the infamous Rocky (Yash). 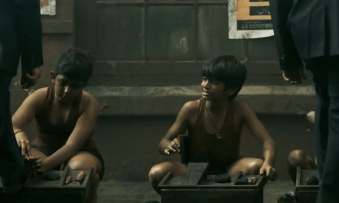 The story spans Rocky’s life from his birth to his infiltration of the mines in an attempt to assassinate Suryavardhan’s son Garuda (Ramachandra Raju). In between is the tale of Rocky’s rise to fame as a gangster in Mumbai and his desire to own ‘the world’ which eventually leads him into the gold mines. Along the way, Rocky has flashbacks to his childhood and to his mother’s words of advice which have helped to make him the man he has become. Since these are mainly words to make her son the richest and most aggressive man in India, they have stood Rocky well in his attempts to become the pre-eminent gangster in all of Mumbai. Rocky is a man who thinks nothing of killing anyone who stands in his way, often in the most bloody and gory ways possible. Luckily for our hero’s welfare, the thugs never manage to co-ordinate for more than two at a time to attack, and even when armed with guns they seem to forget how to aim to kill. However, I did appreciate stunt choreographer Anbariv’s goal of finding the most imaginative way to impale, garotte and otherwise dismember Rocky’s opponents – one of the best being with a handy anchor although Rocky’s prowess with a shovel was also superb!

Yash powers his way through his role as Rocky without ever demonstrating much emotion as the strong silent type who wades through rivers of gore to reach his objective. Although there are the flashbacks with his mother (featuring an excellent Anmol Vijay as the young Raja Krishnappa Bairya) and a rather uncharacteristic but brief romance with Reena (Srinidhi Shetty), for the most part Rocky is as stonyfaced as his nickname implies. However, to ensure that we know he’s not quite as much of a villain as his actions would suggest, Rocky is also shown to have a softer side, usually when faced with young mothers in extreme situations or when faced with gangs of poverty-stricken children. Nothing new or ground-breaking then, since this is typical Southern Indian hero behaviour, but it suits the character and storyline well, so there’s really no need to break the mould. 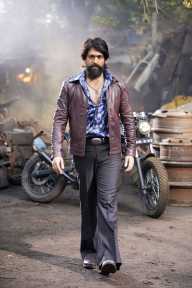 The non-linearity of the story is one of its strengths and also works well to set up expectations for KGF:Part 2 as we are given tantalising glimpses into the next of Rocky’s adventures along with the puzzle of why the government decided to suppress his story with such assiduousness. Jumping around from the seventies (with flares and wide collars – love it!), where the action in the Kolar gold fields plays out, to adventures in Rocky’s youth explains much of his motivation and firmly establishes the other characters in the film. This is really helpful since there are multitudes of minor characters who are important to the story but who are all introduced quickly by Anand, making it difficult to remember who exactly is a gangster, who is a politician. And then decide if it even matters given they are all nasty pieces of work. This does allow for major complexity in Prashanth Neel’s world and he paints a grim picture indeed of corrupt politicians, lawless gangsters who have the police on their side and a poverty-stricken and joyless existence for the rest of the population. Into this dark world, it seems to make sense to inject some light by adding a romance, but the introduction of Reena with the usual stalking = love trope always feels like an add-on extra. 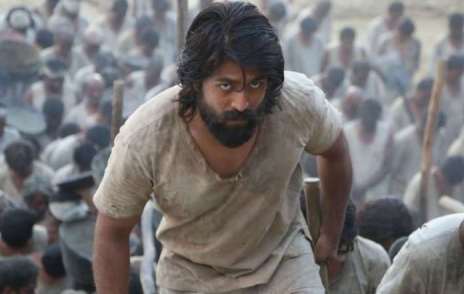 Reena is the daughter of Rajendra Desai (Laxman), one of Suryavardhan’s accomplices in the goldmine and as such she is portrayed as arrogant and heedless of the general population. Rocky sees her and is instantly smitten, following up his initial advances with some terribly cheesy dialogue while Reena does her best to let him know she isn’t interested. Until she sees his compassionate side, which is apparently enough to change her mind. Sigh. Srinidhi Shetty doesn’t have enough screen time to make any impression, but for the most part she too is fairly dour, grim-faced and like Rocky, prone to making declarative speeches. Rocky doesn’t have much dialogue at all, but when he does speak it’s generally overly dramatic and interspersed with plenty of threats and promises of violence. Even the minor characters rarely seem to speak normally to each other and instead there are bold announcements of bravery and threats of violence that do start to wear after a while. The narrative from Anand is in stark contrast and is more minimalistic and factual although this is occasionally confusing when characters are only briefly mentioned once.

Ravi Basrur and Tanishk Bagchi provide the music which suits the atmosphere of the film well. There is one introductory dance number with Yash which is appropriately exhilarating and an oddly placed dance number with Tamannaah, but for the most part the songs are used to help drive the narrative forward. Along with the soundtrack, they succeed in adding emotion and suspense to the film, and unlike Ugramm the music here is kept to a reasonable volume. Cinematographer Bhuvan Gowda keeps the film to grey and dark tones, and doesn’t have much opportunity to vary the colour palette, although scenes in the mine and at a temple ceremony are beautifully done to add red tones to the darkness. Kudos to the fashion designers for recreating the seventies in a relatively subdued fashion and not dressing the characters in ridiculous costumes. The sets and clothes are set in the right time period but not ostentatiously so, and as such don’t take away from the action unfolding onscreen. Thanks to the distributors for ensuring reasonably good subtitles, although the white text was often obscured by the background. Still very grateful to have Kannada films subtitled – even the songs!

KGF is basically another gangster action drama, but what lifts it above the rest is the sheer scale and complexity of the narrative along with standout performances from Yash and the literal cast of hundreds that add depth and texture to the plot. Be warned that the film is incredibly violent, and the fight scenes are frequent, fast and furious but they do fit the story and act to showcase a world that is brutal and uncaring. The story points out that power is the only thing that matters and Rocky’s power is that of his fists. Throughout, it’s those with power who dictate events, and Rocky is determined to control the gold and therefore the money, giving him all the power in the world. There is a lot to take in with the story but the mixture of fast-paced action and slower framing narrative works well to bring it all together. Overall Prashanth Neel has crafted a good story, told it well and pictured it beautifully to draw out the desolation and despair of the gold fields, and the gritty underworld in Mumbai. After all the excitement of Chapter 1, I’m definitely looking forward to Chapter 2!