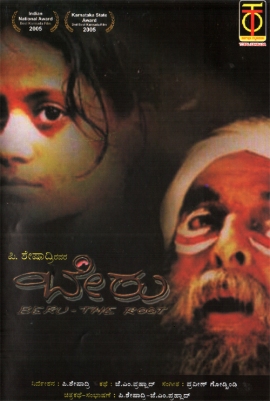 Beru deals with the theme of corruption in local government, but rather than looking at political scheming and the wheeling and dealing of men in charge, the action here focuses on a small rural office and local concerns. Director P. Sheshadri has a background in journalism and documentary film making which is perhaps why he focuses on day-to-day life in a rural community in such a realistic manner. His attention to detail and well-developed characters make Beru an engaging film despite the sometimes heavy-handed symbolism used to get his point across.

The Root of the title refers literally to the root of a large tree which is threatening the home of local folk artist Goravayya (Venkata Rao) but also symbolically to the deep-seated corruption within the local government office. The film shows that this corruption is so deeply entrenched at even the most fundamental level of administration that by the end it seems totally impossible that such dishonesty can ever be eradicated. However it’s not all doom and gloom. There is plenty of humour in the dialogue by writer J.M. Prahlad and even in some of the more trivial problems faced by the central characters. 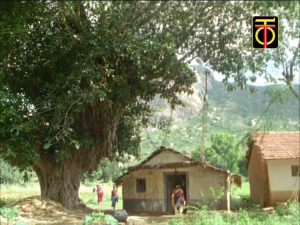 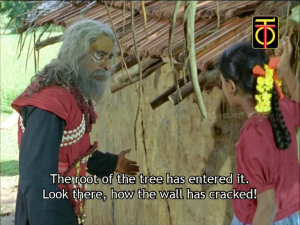 Venkateshiah (H.G. Dattathreya) is the head clerk in the government office in Karadigudda and has been filling in for the role of chief officer while they wait for a replacement from Mysore. He is nearing retirement and has the burden of 2 more daughters to marry on what he considers to be a meagre salary. 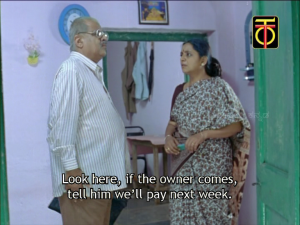 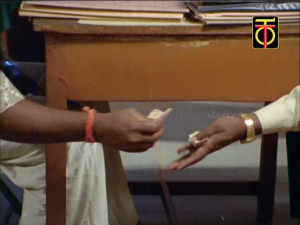 Nothing within the office seems to be done without money passing hands and, as always seems to be the case with any government, reams and reams of paperwork. But with the arrival of new and enthusiastic chief officer Raghunandan (Sucheendra Prasad) it seems as if things may change. Symbolically on his arrival Raghunandan orders the office to be thoroughly cleaned, even going to the extent of taking out his own handkerchief to dust a picture of Gandhi. He’s young, almost painfully honest and his opening speech to his staff is full of ideals, which from their expressions seem unlikely to gain much ground. Once Raghunandan starts going through the books he finds more and more evidence of petty fraud and indications that bureaucracy frequently has taken the place of common sense. 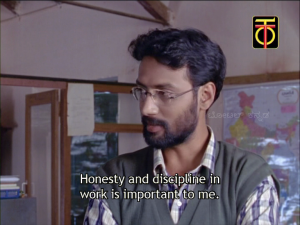 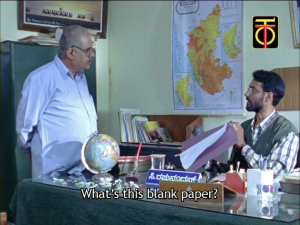 His wife Suma (Neeta) is equally appalled by the government residence that they have been allocated. She is unable to cope with invasions of the local wildlife, and also feels lonely and isolated since she is more used to city life. Raghunandan on the other hand seems to love the local countryside and appears to relish the idea of life away from the crowds of Mysore for a few years. The relationship between Raghunandan and Suma helps to define their characters and also provides a contrast to that of Venkateshiah and his wife, although in the end both wives encourage their husbands in their various deceptions. 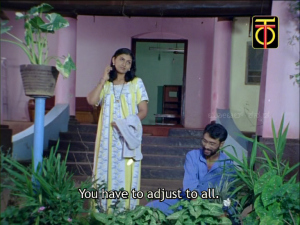 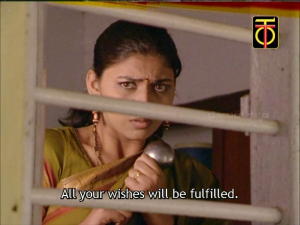 At the same time, local folk-singer and Gorava dancer Goravayya is trying to get permission to cut the root of a tree which is threatening to destroy his house. Goravayya has adopted an orphan Gowri and the two go from house to house begging and giving blessings in the name of Shiva. As part of her investiture Gowri has taken oaths not to lie or steal emphasising the vast difference between Goravayya and the government officials he is attempting to deal with. He is a simple man living a simple life and won’t even consider cutting the tree root without permission from the appropriate authority, But every time he tries to approach Venkateshiah or anyone else from the office, he is brushed aside as his problem is not considered important. 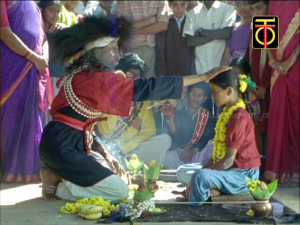 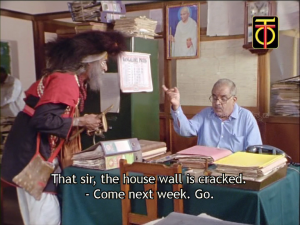 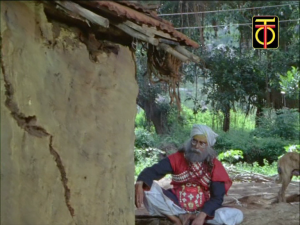 After just a few days in his new job, Raghunandan receives word that the minister will be coming to visit and he is required to survey the local inspection bungalow (IB) where the minister will stay. However no-one seems to know anything about the IB, including its location, despite the fact that over the preceding years funds have been sent for both its renovation and upkeep.

Raghunandan refuses to be fobbed off with excuses that the IB is dilapidated and needs to be replaced and insists on finding out the truth. But what he discovers sets his own path down the slippery slope of dishonesty as he succumbs to appeals from his wife and Venkateshiah’s family to hide the truth. He sinks deeper and deeper into the murk of corruption as he tries to deal with increasingly pressing demands from his head office. 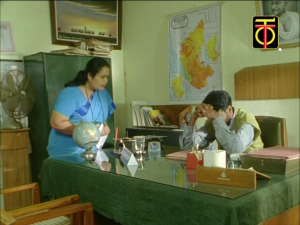 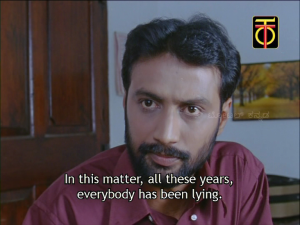 Goravayya is enticed to help with promises that this will ensure a speedy resolution to his problem but it becomes very clear that Venkateshiah never had any thought in his head other than to save his own skin.

What appeals about this film is the ordinariness of the characters who react in very human and realistic ways. I believe in the inherent selfishness of people and this is exactly how the majority of the characters act to a greater or lesser extent.  Sucheendra is excellent as the meticulous and fastidious Raghunandan. I think he captures the essence of his character in the way that he always has a glass of water on his desk sitting on a coaster, with another coaster on top to keep out dust and flies. Having a drink of water then becomes something of a ritual and this is the type of attention to detail by Sheshadri that I appreciated. Raghunandan seems to be the quintessential government official in the way he uses a bell to summon the porter or his typist and is totally oblivious to the activities in the main office since he only deals with his immediate subordinate Venkateshiah. I had a summer job in the civil service back when I was a student and this bureaucratic hierarchy is quite familiar! 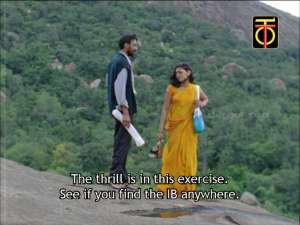 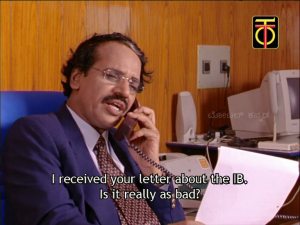 Dattathreya is also impressive as Venkateshiah and my changing feelings towards his character are a reflection of how well he portrayed the role. Venkateshiah initially appears as a man beset by financial problems which he uses to justify his misappropriation of funds and I initially felt sorry for him. But as he struggles to keep his job and entreats Raghunandan to save his retirement fund, his innate selfishness becomes more and more apparent until by the end his actions are quite revolting. The one jarring note is the way Raghunandan seems to go along with Venkateshiah’s final plans as this didn’t seem to fit into my reading of his character, even allowing for his fall from grace.

All the other actors are excellent in their roles and despite his very simple nature I loved Goravayya and the way he cared for Gowri.  There are only a few songs and they are mainly folk-songs pictured on Goravayya and Gowri which generally fits the story. This song explains why he dresses the way he does and he sings it to Suma after he has frightened her by suddenly appearing at her house. Awesome costume too!

I thoroughly enjoyed this film and can appreciate Sheshadri’s attempt to show just how deeply entrenched corruption seems to be in every aspect of government. Good performances and some lovely shots of the countryside by Ramchandra help to make the most of a simple but effective story. 4 ½ stars.

Beru is heavy handed in visual imagery and the corruption rife in local government is illustrated in many ways – some very effective and some also tedious and repetitive. The rural setting is lovely and the setting and small scale is a highlight. There are some excellent performances but the characters are not by and large people I could care about and their plight was largely self created.

Goravayya and Gowri represent simplicity and honesty, and both the characters and actors are appealing. Thank heaven for that as the rest of the characters are pretty repellent. Raghunandan is a career man who wants to keep his hands clean and make his way up the food chain. While he mouths lines about serving the people, he has nothing to do with the general populace or his staff and spends his time alone in his office or isolated in his home. The slightest whiff of trouble for his own career has him covering his butt and the rules are discarded.  Suma uses family connections to protect Raghunandan’s career and he accepts that easily despite his supposed principles that made him refuse an offer to get him a better posting. Venkateshayya is reprehensible, a craven cheat and liar, yet the film gives implicit approval to at least some of his actions.

I don’t think anyone would be terribly surprised that there is corruption in any government. The many meaningless and unproductive layers of bureaucracy in the Indian civil service are legendary. I was hoping the film would do something more interesting than just cast up examples, but P Sheshadri repeatedly states the obvious without taking it anywhere. Beru drifts somewhere between being a message film and a misery memoir. The message could be ‘Don’t get caught’ or perhaps ‘God helps those who help themselves’. The end effect is a lot like listening to two hours of whinging by a bunch of largely unlikeable and self centred people. 3 stars.