And he’s back! Mysskin has returned with a murder/mystery thriller which has more commercial elements than his previous films Yutham Sei and Anjathey, but still features plenty of his distinctive style. Thupparivaalan has more than a passing nod to the recent Sherlock Holmes films and Mysskin acknowledges these influences in his opening credits, but this is still a very Indian take on the detective genre. Vishal is excellent as the quirky investigator trying to solve the mystery of a dead dog, but Prasanna is just as good as the trusty sidekick, while the twists and turns of the story keep the film engaging right to the end. This still isn’t your standard mass fare despite some excellent fight scenes and the odd explosion or two, so expect to engage those little grey cells while enjoying the overall spectacle.

The film opens with a couple of quick deaths before switching to a frenetic Kaniyan Poongundran (Vishal) dashing around his apartment in a tizz as he hasn’t had an engrossing case for a while. Kani has a distinctive sense of style that extends from his fashion sense to the furnishing of his apartment. One wall is a huge bookshelf and there are copies of paintings by Vermeer and Degas that work their way into the narrative, while the wing chairs and comfy sofas evoke images of English country homes and roaring fireplaces. Kani himself doesn’t step outside without his cravat and jaunty cap, but it’s not just what he wears, but his movements and decisive walk that are part of his overall look. Kaniyan has principles too – he knocks back a huge fee for finding a businessman’s lost daughter as he reasons out what has happened and thinks the father will react badly to her return. Instead he accepts a commission from a young boy who brings his pocket-money to fund an investigation into the death of his pet dog. 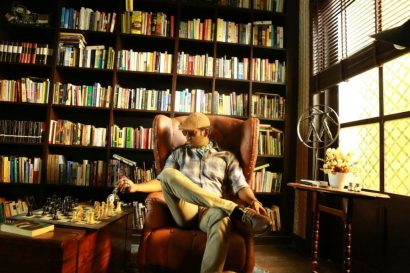 It’s not long before Kani has linked the dead dog to the murders from the opening scenes, and along with his associate Manohar (Prasanna) he cajoles, bribes and deceives his way to the information he needs. Eventually the police invite him on to the case and with their help Kani and Mano start to find a more devious plot than they first imagined.

Mysskin still has an obsession with feet, and many of the shots are from ground level, but to add a new perspective, Kani has a height obsession and prefers to sit at the top of his bookcase ladder. As always with Mysskin films the staging and dressing of each scene are just as important as the protagonists and the action taking place. At one point Kani and Mano speak to Mrs Dhivakar (Simran) whose husband and young son were killed by a lightning strike and we see her in profile reflected in a mirror that’s reflected in a mirror and so on. It’s a poignant view of her pain that is very effective, and this is just one brief moment in a film filled with such insights. There are layers upon layers and I know it will take repeated viewings to pick up every detail Mysskin has managed to place throughout the movie. 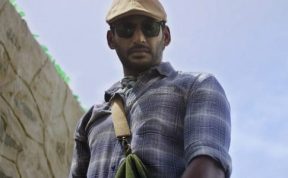 There is a sort of romance too. Mano falls foul of some pickpockets in a subway that ends up with Kani taking them on as a kind of project. The eldest is Mallika (Anu Emmanuel) who is trying to look out for the rest of her siblings and protect them from an abusive uncle. In a shockingly brutal scene Kani employs Mallika as a housekeeper, and it’s hard to decide if her smile after being thrown to the floor is because she is accepting of the abuse or because she understands the implication of Kani’s strong reaction to her presence. However, Mallika’s green tea isn’t any more acceptable to Kani than Mano’s attempts and while Mallika obviously has feelings for Kani, he doesn’t reciprocate until it’s too late. Perhaps as compensation Mysskin adds a strong female character on the other side (Andrea Jeremiah), who is intolerant of harassment and perfectly capable of fighting her own battles, and for the most part Kani’s treatment of Mallika is no different to how he treats the rest of the world.

The villains in this case are a particularly nasty group of assassins for hire led by the uncompromising Devil (Vinay). Over breakfast it’s casually revealed that there is a body in the fridge, while Mysskin adds beautiful soaring violin music to a scene where Devil uses a chainsaw to dissect a corpse. I also wondered about the significance of Devil’s choice of beverage as coffee, which always appears drinkable, compared to Kani’s green tea which rarely seems acceptable. Such are the thoughts that go with any Mysskin film where every small detail may be important. Or possibly not – and that’s what keeps you hooked every time!

The gang’s actions are chilling, mainly due to the matter of fact and almost casual approach to their brutality, and their lack of emotion as they carry out their crimes. They kill a child with no apparent remorse, the death of Muthu (K. Bhagyaraj) is particularly grotesque and a scene that involves seppuku is frighteningly authentic. In contrast, Kani and Mano have a warm friendship despite Kani often racing ahead of Mano in the deductive process, and neither are afraid to make mistakes in their search for answers or become emotionally involved in the outcome. 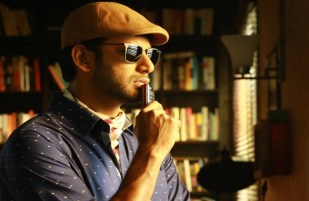 The action too is well executed. There are a number of fight scenes that mainly feature hand to hand fighting but here again Mysskin veers away from the norm. In a restaurant brawl, none of the tables or chairs are broken despite the knife-wielding assassins being thrown around the room. Another in an abandoned room with hanging shreds of fabric is as beautiful as any choreographed ballet with clever use of the space. The final scenes though are gory enough for any SI film aficionado, but here too Mysskin ensures there is a puzzle that needs to be solved before we can reach the final climax.

The film focuses heavily on the lead pair of Vishal and Prasanna and they work brilliantly together – just as well as Arthur Conan Doyle’s fictional Holmes and Watson. Mysskin has caught the nuances of Holmes/Watson relationship perfectly here and the two actors buy into it superbly. There is emotion, comedy, drama and plenty of excitement as they work together, with Kani always that ten steps ahead of his friend. Vinay is an effective antagonist too, and he delivers an excellent performance as a heartless killer for hire. The rest of the cast, including such veterans as Jayaprakash and Thalaivasal Vijay, all fit well into their roles with John Vijay particularly good as the sleazy Kamalesh. Anu Emmanuel doesn’t have a big role to play but she manages to give her character a reasonable presence in the limited amount of screen time she has and generally does a good job. Everything else is as meticulously crafted as expected with excellent cinematography from Karthik Venkatraman showing a keen eye for the detail of each scene. There are no songs in the film but the background music from Arrol Corelli is evocative and fits well with the narrative without overpowering the action. 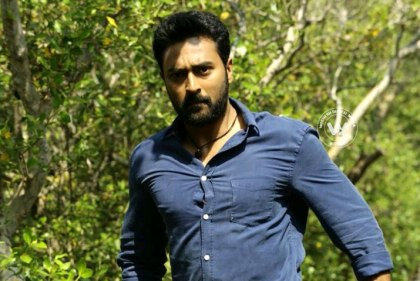 Thupparivaalan is an excellent return to form for Mysskin and I’m really hoping that it’s the start of a franchise of Kani and Mano films as recently reported. Although Vishal produced the film, this is definitely Mysskin’s show and he’s managed to deliver a rather more commercial film without losing any of his trademark style. This is stylish, clever and packed full of detail while still remaining a visual feast. I really enjoyed Thupparivaalan and thoroughly recommend watching for Vishal, Prasanna and trademark Mysskin style.

One thought on “Thupparivaalan”