I really enjoyed Suni’s Simple Agi Ondh Love Story, which had a refreshingly different approach to romance so I was hoping to see him work similar magic with Operation Alamelamma – and I’m happy to say he does. At heart it’s another love story, but this time mixed in with a kidnapping drama, seasoned with plenty of comedy and perfectly served with a dash of suspense on the side. The characters are great, the situations well thought out and the dialogue very funny, ensuring Operation Alamelamma is an entertaining and thoroughly satisfying watch.

Purmy (Rishi) is an orphan who falls foul of the law when he stops to pick up a designer bag that has been left in the middle of a roundabout in Bangalore. Unbeknownst to Purmy, the bag contains the ransom for rich businessman son who has been kidnapped, and the roundabout is the drop site. As soon as Purmy approaches the money, he is set upon by the police and despite his protestations, he’s arrested and taken to the police station. It seems clear that Purmy was just in the wrong place at the wrong time and is guilty only of an obsession with designer and branded goods, however Inspector Ashok (Rajesh Nataranga) is still suspicious, and since Purmy is the only suspect the police have, Ashok decides to keep him in custody. 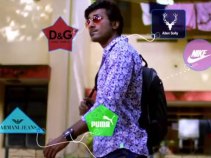 Ashok is also suspicious of the kidnapped boy’s father, Kennedy who is a crook and is suspected of being involved in a number of shady business deals. Kennedy seems distressed by his son John’s disappearance, but Ashok isn’t convinced and wonders, could it all be a front? As the kidnappers call and arrange a new ransom drop Ashok realises they must have someone on the inside – but is it Kennedy, or Purmy, or some other suspect they haven’t yet identified? As the suspense builds and Ashok is under pressure from his superiors to come up with a suspect, the chances for Purmy to prove his innocence seem to be fading.

During the interrogation, Purmy uses the excuse that he is getting married in a few days to try and garner some sympathy, and perhaps even help get him released.  His romance with Ananya is shown in flash-back in between interviews with Ashok as the police search through Purmy’s social media accounts trying to find a link to Kennedy and the kidnapping.

Ananya is a teacher while Purmy sells vegetables by auction at the local market, but despite this disparity in their social status the two gradually become friends. However, the path to true love doesn’t run smooth and despite enjoying an apparently good relationship with Purmy, Anaya ends up engaged to someone else.  This seems to spell the end for Purmy’s chances, but he inadvertently becomes friends with Ananya’s mother (Aruna Balaraj) which potentially could give him a second opportunity to steal Ananya’s heart. Suni ensures there is suspense in the romance track as well as the crime drama since it’s not clear if Purmy is telling the truth when he talks about his wedding or just fabricating a story to hide his involvement in the kidnapping case. While during the flashback sequences it seems very hit and miss if Purmy will end up with the girl. The two different threads of crime drama and romance work individually to build anticipation, while together they keep the audience guessing what the real story is and just who is behind the kidnapping.

Part of the reason that Operation Alamelamma works so well is the cast, who are all brilliant in their roles. Suni has a good eye for picking a more unusual leading man and Rishi steps up to the challenge of his role well. He geeky and awkward enough to be convincing as the innocent bystander, but as the story goes on he gradually starts to reveal unsuspected depths and this is where he starts to shine. It’s an excellent performance in a quirky and unusual role that does keep the audience guessing throughout. Shradda Srinath has already shown what a good actor she is in U-turn, and she is effortlessly good here as Purmy’s love interest. Ananya has plenty of personality and Shradda ensures she remains a sympathetic character, even when she make some obviously bad decisions. I love the easy camaraderie Ananya has with her mother which compares to the prickly persona she shows to the rest of the world. Aruna Balaraj is superb as Ananya’s mother and the rest of the cast are all excellent, and perfect in their roles.

The other reason for Operation Alamelamma’s success is good writing. The characters are all well developed with detailed personalities and the twists in the storyline all seem to arise naturally as a result of the characters’ actions. The truth behind the kidnapping isn’t apparent until last moment and even then, it’s cleverly revealed. Suni has put together an interesting story and added quirky characters that engage right to the end. The music too is good, with Judah Sandy supplying a couple of excellent songs and effective background score. Operation Alamelamma is another one to add to the growing list of excellent films from Kannada cinema this year and is well worth catching on the big screen if you can. Highly recommended.