Baahubali is reminiscent of classics like Patala Bhairavi and Gulebakavali Katha, with long lost princes, secluded kingdoms, stunning visuals and swashbuckling action. Rajamouli builds steadily to the cliffhanger climax with some fun, flirting, fighting and flashbacks along the way.

A baby is saved by the sacrifice of a majestic woman. He grows up happy and ignorant in a small village, but is always drawn to the high mountains. He tries to scale the massive waterfall to reach the peaks but always fails. Until one day a vision of a beautiful woman leads him to success and he stumbles into the kingdom of Mahishmati. Grown up and frequently shirtless Shivudu (Prabhas) meets his dream love Avanthika (Tamannaah). She is a warrior on a mission to rescue Devasena (Anushka Shetty), held captive for over 25 years by ruthless king Bhallaladeva (Rana Daggubati). Bhalla hates Devasena because she once chose his rival, the legendary Baahubali. And Shivudu is the very image of Baahubali. Hmmmm.

The majestic woman was Sivagami, the queen mother, played by the stunning and regal Ramya Krishnan in an extended flashback. 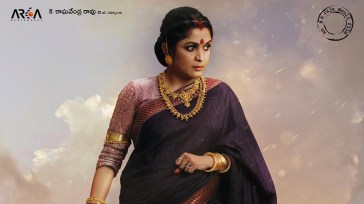 I was so excited to see her in the cast, and even more so that she has a substantial role. Sivagami is reasonable but ruthless, her eyes blaze with power, and her word is the law. She rules the kingdom and Ramya Krishnan commands every scene she is in. Sivagami has a nice dynamic with Kattappa (Sathyaraj), her enforcer and bodyguard. Sathyaraj doesn’t need a lot of dialogue to build a strong characterisation, and as the story unfolds Kattappa becomes more complex and ambiguous. This royal family has some baggage.

There is always a point where a Telugu film hero pushes all others aside so he can do the hero-ing. I quite liked that when Shivudu tells Avanthika that her dreams are now his so he will go free Devasena for her, he actually had no skin in the game and really was doing it to help her. Sure, he had had some run ins with the kingdom guards but he didn’t know who he was or that he might have a more personal interest in the outcome. Avanthika drugged him to give herself a head start and he didn’t reproach her for that either. It was more of a partnership, with Shivudu acknowledging that she wasn’t going to give up just because she had been distracted by his flexing.

I have high hopes that by the time the second movie starts Avanthika’s ankle is healed and she will resume arse-kicking, and will be motivated by having something to fight for rather than a cause to sacrifice herself for. I also liked that Avanthika’s nihilism was displaced somewhat by an appreciation of beauty and her acceptance of love even if it is a filmi cliche.

The subtitle team gave Shivudu an unexpectedly genteel aspect as he frequently said things like ‘oh my!’ and ‘oh my goodness!” which didn’t seem all that warrior like. Prabhas is so genial and his dialogue delivery sounds a bit too modern and mumbly for a genre piece, but he totally commits to the role and does the best dance-fight-makeover I have seen. While I objected to Avanthika being forcibly partially stripped (mostly due to the inclement weather), I did appreciate that Shivudu had a steady hand with the eyeliner. And that Rajamouli had Prabhas cavorting under a waterfall as much as Tamannaah did. Prabhas and Tamannaah make a nice looking couple but I am more interested in seeing how their story ends.

Rana was very impressive, both for his ye olden days shirtless physique and his performance. Rana gave Bhallaladeva enough smirking nastiness to be delightfully hateful but also showed he was a smart and fearless warrior who legitimately had reason to expect he could be king. Bhalla might not go out of his way to remove Baahubali, but he would take advantage of a situation if fate presented. His scenes with Devasena were imbued with the weight of years of brooding and venom and he declaimed the spiteful dialogue with fiery precision. Anushka gave as good as she got so I am looking forward to their backstory being developed in the next film and seeing a bit less of her dodgy weather-beaten makeup.

The Kalakeya are Ooga Booga natives complete with dodgy “tribal’ accoutrements, falling somewhere on the Mad Max to Lord of the Rings tribal baddies spectrum. They presumably can’t speak Telugu because they are Orc-ish, and I guess choosing another regional language would have opened up various cans of worms so the faux Bushman-esque dialogue may be a smarter workaround than it seemed.

The action scenes are awesome and the final battle is truly spectacular. While there is a heavy reliance on war machines and fancy armaments (I loved Bhalla’s Lawn Mower of Death), the stakes are still very personal. Kalakeya tries to stop Baahubali by literally throwing more people at the problem. It’s a cheesy idea played totally straight and it just about took the roof off the theatre when Baahubali emerged from under the pile of bodies.

The production design is beautiful and this is well worth seeing in a cinema just for the gorgeous fairy tale design and for all the things. The waterfall! The CGI is sometimes clunky but it does create the right impression even if specific moments are not seamless. I am not sure what I think about the watermark that appeared on screen whenever a CGI animal was in the shot. I wasn’t fooled for a second by the bull that Rana wrestled but I admit I was paying more attention to his shoulders than the bovine opponent. A fight scene in the ice and snow is poetic and deadly like a masala-fied  Zhang Yimou, and the subsequent toboggan escape is pure Bond. There were about 20 shoemakers credited in the end titles. After some discussion Heather and I decided that it must be hard to make shoes that don’t look like shoes but that still do the trick. Bravo cobblers! Take a bow goldsmiths!

MM Keeravani’s soundtrack left minimal impression on me as I was caught up in the story and visuals. The item number Manohari was a stand-out; sensual, saucy, and a bit silly. The girls got handsy with Prabhas as as lots of drunk guys swayed past on ropes or acted as platforms for the ladies. He was more like a prop for the girls, and they used his lanky frame to excellent effect. 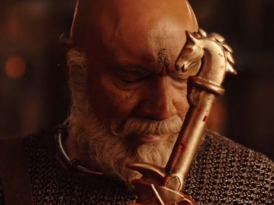 Rajamouli has a knack for casting. I’d never thought of Sunil as a leading man but Maryada Ramanna proved otherwise, and we all know the real star of Eega. Casting Ramya Krishnan as Sivagami is genius, and while I was slightly disappointed that Anushka had so little time on screen in this first film I am very VERY excited about seeing her character in the finale. The support cast are all pretty solid and the multitude of characters are distinct and memorable from Shivudu’s villager family to the minor royals and the forces out to liberate Devasena. Oh, and Rajamouli himself, finally venturing out of the end credits and into the main film.

SS Rajamouli has a great sense of how to translate narrative into visuals and how to build the world he needs to tell his story. Baahubali is truly grand and still totally masala, true to its Telugu roots. See it!

Heather says: Baahubali is an epic film in every sense of the word and I loved every minute! It really is sweeping fantasy adventure on a gigantic scale and I will need to watch it again (and again!) to fully appreciate all the amazing detail. From the sheer immenseness of the towering waterfall in the opening scenes and the lavish Kingdom of Mahishmati to the delicate design of the jewelry and everything in between, the film looks amazing – due no doubt to the cast of thousands mentioned in the end credits. But it’s not just a visual spectacle, as Rajamouli breathes life into a classic mix of mythology and folklore to provide an entertaining and captivating story, naturally along with a good dash of derring-do and plenty of flexing of muscles!

I’m a big fan of Prabhas and he really came into his own once he got a sword in his hand. I was quite impressed by his rock-climbing technique too, although he did seem to miss a few good cracklines that might have made his ascent somewhat easier. However it’s not all just about the muscle flexing, and Prabhas does have plenty of likeable charm throughout and adopts a suitably commanding presence on the battlefield. Rana was every bit as good and he seemed to relish the occasional ambiguity of his character even while embracing the dark side.As Temple mentions, Peter Hein’s action is excellent on every level, and the epic battle scene in the second half is simply superb. I prefer to think of Bhallaladeva’s device as the spinning scythes of doom, perhaps betraying my love of LOTR, but there is plenty of other weaponry to make my inner fantasy nerd happy.

Rajamouli is also to be congratulated for including four strong female characters who all have important roles to play in the story and who don’t fade into the background when the hero appears. Ramya Krishnan surely must have the best eyes in the business and her imperial mannerisms were perfectly delivered. I think I need to adopt her attitude for my lectures – my word is the law! Great also to see Tamannaah’s warrior role wasn’t just an excuse to let her run around in skimpy attire and wave a sword, inappropriate winter clothing aside. She did get to do some real fighting and looked appropriately fierce when required. Like Temple I was disappointed in Anushka’s make-up but I’m definitely looking forward to learning more about her character and Sathyaraj’s excellent Kattappa in the conclusion. With amazing production and excellent performances from all the cast, plus Rajamouli’s legendary story telling skills, Baahubali is not to be missed. Just make sure you see if in the cinema for the full effect. All I can add is roll on part 2!