Rajkumar Periasamy’s debut film is a crime thriller that mixes gold smuggling and kidnapping with friendship and betrayal to tell the story of Venkat (Gautham Karthik) and his two friends Kumaran (Lallu) and Tip Top (Daniel Annie Pope). The film moves between the lush landscapes of Myanmar with vibrantly green fields, sparkling water and gigantic gold Buddhas, to the crowded backstreets of Chennai and the Burmese area of the city near Sowcarpet. There is plenty of fascinating detail about the Burmese Tamil population that adds more layers into a story made engaging by numerous twists and good action sequences. Rajkumar Periasamy packs a lot into the run time of just over 2 hours and with the stunning scenery and excellent soundtrack it’s definitely well worth a watch. 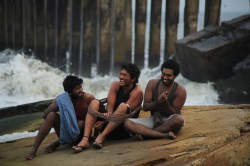 The story starts with a young Venkat as he makes the move with his mother and sister from Myanmar to India, where his father has found work. The year is 1988 and the family move to a mainly Burmese Indian area of Chennai where the food is familiar and the locals all have a similar story to tell. Venkat immediately makes friends with Kumaran when he sees him playing Venkat’s favourite game of Chinlone and the two quickly become inseparable, especially after Venkat’s father is tragically killed shortly after their arrival in the city. Venkat grows into a fairly typical unemployed young man who worries his mother and amuses his friends, but there is little work in his area and his disillusionment means he jumps at the chance of a job when Kumaran introduces him to local gold merchant Gunaseela (Siddique).

However, all is not as it seems and in reality Gunaseela is a gold smuggler who is impressed by Venkat’s enthusiasm and business skills. Gunaseela slowly draws Venkat into the business by taking him to Singapore and showing him the basics of the smuggling trade. Venkat is given the responsibility of looking after his own shop and Gunaseela uses Venkat’s sense of responsibility and loyalty to further draw him into the illegal business. However, despite the shady method used to get the gold, the responsibility turns out to be the making of Venkat and he runs his shop as ethically as he can under the circumstances. It’s the small details Periasamy adds that make this part of the film so convincing, such as the way money is transferred to the dealers in Singapore via a totally unrelated shop and the various methods by which Gunaseela’s gold biscuits are smuggled into the country. The brashness of the smugglers and their nonchalant attitude to the police also ring true while a gold traders association where Gunaseela is a member is as dodgy as they come.

Where the film falls down though, is in the introduction of Natasha (Sana Makbul) as the love interest whose attractions are such that Venkat vows to turn respectable and give up the smuggling trade for good. Natasha is a singer and Venkat notices her when she sings the first lines of her song in Burmese. But Natasha’s background isn’t explored in any detail, and instead, as is usual for heroines in Tamil film, once she is established as the reason for Venkat’s decision to change his career, she is rapidly side-lined and only appears to act as a voice of conscience whenever one is needed. Venkat’s friends too get little in the way of character development which becomes something of a problem later on when the three head to Myanmar for one last big deal. Their motivations for coming on the trip are rather murky and some of the reactions don’t ring true, mainly because it’s hard to decide how they should be reacting, given the little that has been shown of their personalities. However, although most of the characterisations are superficial, both Venkat and Gunaseela fare rather better, and their relationship in particular is nicely explored with enough emotion to make it feel authentic and plausible.

There are some excellent twists in the second half but the fast-paced action takes centre stage and the film loses some coherence as characters appear and disappear before their relationship to the plot is established. However, the action is exciting and often unpredictable while the fight scenes are well choreographed, even if very much in the usual ‘hero beats unlimited number of attackers despite being unarmed’ style. The chase sequences where the police and Directorate of Revenue Intelligence attempt to catch Venkat and his friends are also excellent and the tension rises nicely as Venkat starts to run out of time to solve his problems, and his friends and family start to suffer as a consequence. The plot twists are well handled too, and are frequently unexpected, almost shocking at times, which adds to the tension of the second half.

Gautham Karthik really is good here and gets his emotional reactions just right, particularly when he returns to the land of his birth. His confusion and despair later on is perfectly done and fits well with his character’s loyalty and determination to ‘do the right thing’. He does have a voice-over which is occasionally annoying as the dialogue doesn’t relate well to the action taking place onscreen, although that may be a subtitle issue (I’m not convinced though, as generally the subtitles for Rangoon were excellent and included English idioms and slang terms appropriately). What works best is his relationship with Gunaseela and the father/son rapport they develop. This is helped by the jealous reactions of Gunaseela’s right hand man who lingers in the background as an ever-present threat, while Siddique is smooth and supportive right up until things don’t go his way.

The rest of the cast are good and although Lallu and Daniel Annie Pope don’t get a lot to do until the second half, once they get a chance both are impressive despite their limited dialogue. The background music and songs from Vishal Chandrasekhar and Vikram RH fit well into the film while Anish Tharun Kumar does an excellent job with the cinematography ensuring an exotic feel to the portions set in Burma and Singapore while keeping a local and more homely feel to Chennai. Plus there are lots of shots of the food which looks amazing!

The story of Rangoon is excellent and the action well integrated into the screenplay, but the film really didn’t need the romance which comes across as a commercial gimmick without adding anything important other than a couple of good songs. The support characters too needed more time onscreen together to develop their relationships with each other and the major characters, but the two main characters of Venkat and Gunaseela more than make up for these minor flaws, while the film’s various twists keep it entertaining right up to the end. I really enjoyed Rangoon with its mix of drama, action and thrills, and the different landscapes and detailed settings kept the background interesting and realistic. Recommended for the twisty plot, good performances and fast-paced second half.