Lijo Jose Pellissery’s award winning film from last year is a fascinating story of a death and funeral in a small community in Kerala. Although the story sounds sombre there are plenty of comedy moments along with piercingly accurate observations of human behaviour as the family gathers to mourn and bury Vavachan (Kainakary Thankaraj). Chemban Vinod Jose is fantastic as Eeshi, Vavachan’s son, but it’s the minor characters including Eeshi’s mother and his seemingly unflappable friends and neighbours that make Ee. Ma. Yau. such an exceptional film.

My subtitles translate the title to R.I.P., but google suggests that it’s a reference to Eesho, Mariyam, Yauseppe (Jesus, Mary and Joseph), a funeral prayer in Kerala. The opening credits feature a funeral procession that slowly wends its way across the screen with a backdrop of the ocean on a sunny day. This kind of celebration with a band and an array of church officials is what Vavachan tells his son he wants for his funeral as he reminisces about his own father’s demise while drinking a few glasses of arrack. It seems to be a normal conversation, and potentially one which Eeshi has heard before as he agrees to providing his father with a magnificent and impressive funeral without ever considering that he may need to deliver sooner rather than later.

The film begins earlier as Vavachan arrives back in the village with a duck, several bottles of booze and a bundle of money that’s basically worthless after demonetisation. He looks serene and at peace on the bus with his duck, but on arrival back at the village first he fights with another villager Chavaro (Kunjunju) and then at home argues with his wife Pennamma (Pauly Valsan) who is unimpressed by Vavachan’s long absence. Along with her daughter Nissa (Krishna P.) and daughter-in-law Sabeth (Arya Salim) Pennamma conspires to add ‘medicine’ to her husband’s stash of alcohol and the duck curry, to make him stay at home. But as Vavachan sings, dances and drinks, he suddenly falls, hits his head and is gone before anyone can react to the sudden crash. 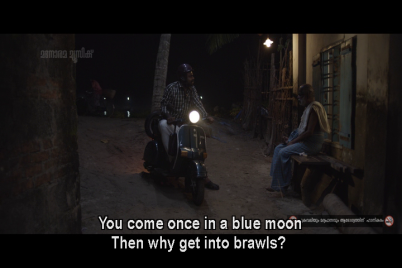 Eeshi has no money, so the sudden burden of his father’s fabulous funeral is a huge problem, which he resolves in time-honoured fashion by selling his wife’s jewellery. His father’s last words resonate in his ears as he arranges for a coffin far beyond what he can actually afford, although it also comes with a free suit and even a beautician thrown in for good measure. Although his friend and neighbour Ayyappan (Vinayakan) tries to rein in Eeshi’s attempts to create his father’s perfect funeral, it’s ultimately lack of funds, a suspicious priest and the inclement weather that combine to give a completely different ceremony than Vavachan had described. 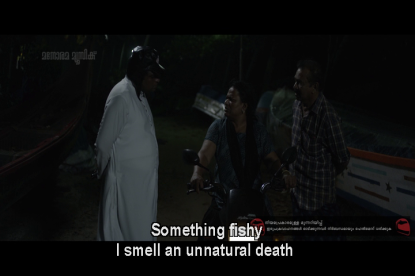 There are so many wonderful characters here, each with their own quirks that together paint a colourful picture of life in the village. Pennamma seems to be a typical housewife as she discusses her husband’s failings while cooking his dinner, but once Vavachan dies she transforms instantly into the chief mourner, wailing incessantly over his body with her cries getting louder and more strident whenever anyone arrives at the house. She has an uncanny ability to know when someone is near and start crying just in time! Every visitor is then subjected to her pointed comments and snide remarks, all made under the guise of talking to her husband’s corpse that ensures Pennamma can pay out every insult (real or imagined) she has endured over the years. Pauly Valsan is excellent here and her Pennamma is a compellingly accurate portrayal of a widow making the most of her brief time in the spotlight. P.F. Mathews screenplay is keenly observational and he captures equally realistic reactions from the other members of the family and various other villagers who come to mourn Vavachan’s passing, or just call in to see what is going on. As Eeshi is out trying to organise the funeral, Sabeth is mostly worried about the appearance she will present to visitors now that her husband has pawned her jewellery. Nissa on the other hand is trying to fend off her rather too amorous boyfriend who wants to take advantage of the upset and keeps trying to get Nissa alone. 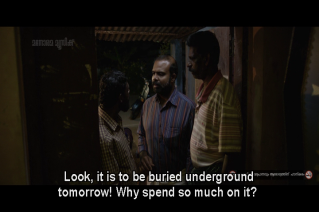 More and more issues arise as Eeshi tries to organise the funeral. First of all the doctor isn’t available to come and certify the death, and then the nurse is made suspicious by the strong smell of alcohol and the injury to Vavachan’s head. Chavaro causes problems by suggesting that Vavachan’s death was not natural, and Father Zazcharia Parappurath (Dileesh Pothan) takes his concerns seriously. The priest is a wannabe detective and immediately starts to ask questions and investigate the circumstances of Vavachan’s death while berating the local police officer for his inaction. At the same time, a journalist repeatedly calls Eeshi to get details of the funeral, which Eeshi cannot give as the priest has not confirmed the time. Adding the final straw, Vavachan’s prolonged absences are explained at the most inopportune moment, just before the torrential rain hits.

What I really enjoyed about this film are these minor characters and small vignettes as each plays their role in the funeral. The priest’s investigations, Chowro’s troublemaking, the one neighbour who stays with the body and seems unperturbed no matter what happens, the police officer reluctant to venture out and become involved, even the government worker called out to mend the power line are all realistically drawn and relatable to real life. The situation may eventually end up fairly extreme, but on the way there, Lijo Jose Pellissery touches on many typical reactions and conversations that occur in most funeral’s, whether in India or anywhere around the world. 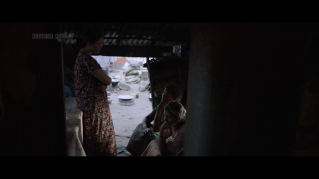 What also stands out is the sense of community that comes through strongly as Eeshi’s neighbours all pull together  – whether it’s trying to find the doctor to certify the death, getting Vavachan ready for his funeral or putting a tarpaulin up to shield the body from the rain, everyone pitches in to help. But while most of the activity revolves around Vavachan’s death and funeral with all the associated comedy, there are touching and poignant scenes involving a grave digger, who has an epiphany of sorts on the beach along with a scruffy stray dog. Here is the compassion and spirituality that is missing from Vavachan’s funeral, and even more markedly, missing from Father Parappurath’s attitude towards the dead. Although the film is about a funeral, for the most part it’s not sad, excepting when the gravedigger himself dies and is buried in the grave he was digging just hours before.

I love the realism in this film that’s cleverly enhanced by the touch of fantasy that brings disparate elements together to create an engaging whole. The attention to detail is perfect while Shyju Khalid’s camerawork captures the miserable weather, grieving family and curious villagers beautifully. The comedy is well written and funny without ever becoming patronising and the variation of light and shade in both the story and characters seems perfectly balanced. Ee Ma Yau is at heart a simple story, but there is so much more going on here and despite being set in a small fishing village the  characterisations and symbolism could apply to almost anywhere. Add in the wonderful sounds of nature, sharp observations and excellent script, and Ee Ma Yau really is a wonderfully engaging film. 5 stars.