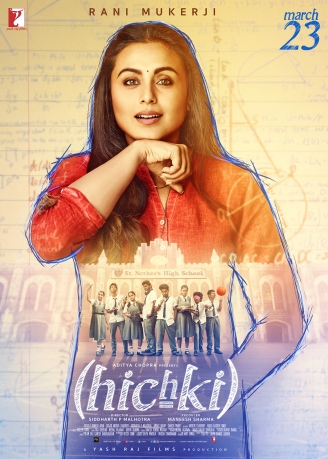 Siddharth P Malhotra directed and co-wrote this adaptation of an autobiography by Brad Cohen. While there are absolutely no surprises in this classic underdog story, the film made some changes to the book including making the lead a woman.

Rani Mukherjee delivers a rock solid performance as Naina Mathur, a part time animator who wants to be a teacher. She also has Tourette’s Syndrome. I have reservations about casting non-disabled actors in roles where the character has a disability, and I am all for real representation. But in the Hindi film industry where being visibly different (old, fat, dark, pale, disabled etc) is often the trigger for some very unfunny shenanigans, this film does a pretty good job of portraying Naina as a woman with a neurological condition and a rich and satisfying life, not as a sideshow. I read the director and Rani did quite a bit of work on getting her portrayal of the symptoms right. So is this at least some kind of progress? I tend to think so in this context but of course it is far from the end goal of inclusion and real diversity. It seems so long since Marlee Matlin won her Oscar and yet. Here we are. 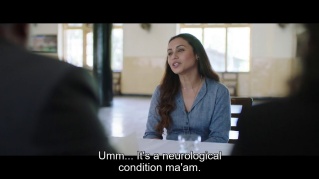 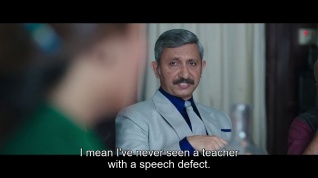 Naina wants to be a teacher because she once had a teacher who inspired her, made school a place of acceptance, and helped her accept herself. She wants to be that teacher for other kids and to show that she was herself worthy. St Notker’s needs a teacher for their terrible 9F class, the slum kids nobody wants at the fancy private school. They are desperate and Naina is determined. 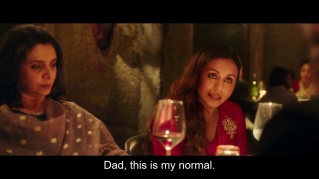 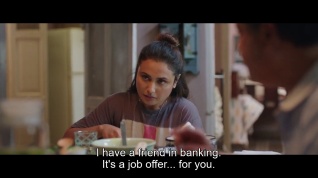 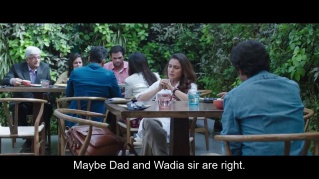 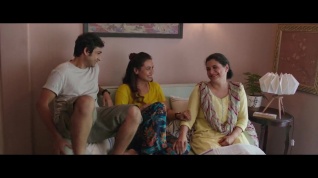 Naina lives at home with her brother and mother, in a happy middle class household. Her father left the family, partly because of his own issues at having a disabled child. I love her mum and brother. They seem so affectionate and relaxed. They get her, even though they know she is doing it tough and they can’t fully understand her, they make sure they are there for her. 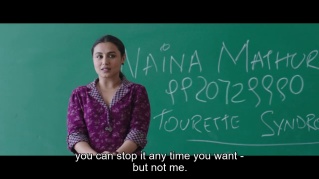 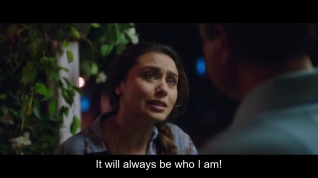 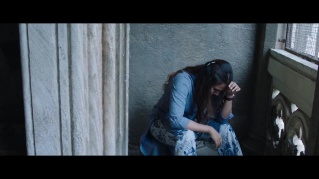 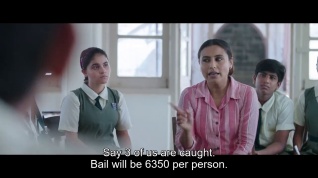 Naina meets each stupid comment or startled reaction head on and with practiced charm. She has both vocal and motor tics, and Rani modulates the timing and severity to show the effect of stress or high emotion. Her anxiety before interviews, the techniques she uses to minimise or delay her tics, her habitual façade of good humour are all tied to Naina’s life and challenges, not just an acting improv challenge. Rani’s expressions were subtle but conveyed the stress she felt when a tic was imminent and the toll people’s judgements took. When she was in full flight with her class, her tics flowed into the back and forth of their chatter and subsided or became part of her own jokey delivery. Naina’s relationship with her dad (Sachin) is strained as he is ableist and patronising where she just wants to be treated the same as her brother. Their conversations have a grinding banality with none of her customary humour or energy. 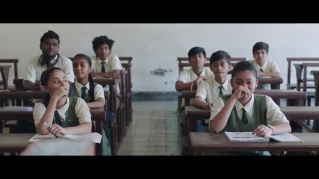 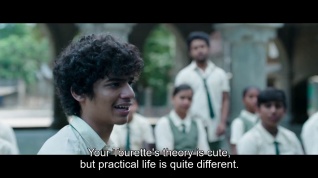 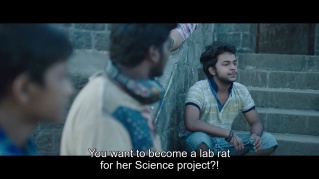 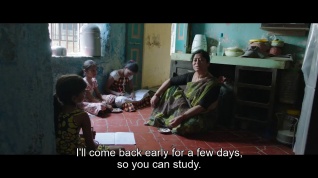 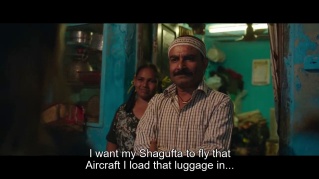 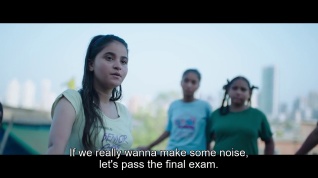 The kids were painted much more broadly. There are boys who refuse to trust outsiders, bright girls who could do so much with their lives, the quiet one, the hip hop dude, the nerd who is great at maths thanks to his gambling sideline. All the usual pranks and hijinks ensued. I did appreciate that when middle class Naina took a picturesque stroll through the slum where the kids lived, she saw supportive parents and families who wanted their kids to do well. They may not have turned up at Parent Teacher meetings but it was not for lack of interest. Sure it’s cheesy but I am quite tired of the misery porn genre and I liked that Malhotra didn’t make all of his kids have terrible lives full of dramatic suffering. Class and group dynamics can do as much to hold kids back as outright abuse can. There’s a bit of magical thinking around how disadvantaged children can overcome setbacks by working hard and being positive, but generally the logic was pretty sound if the delivery is a little sugar coated. 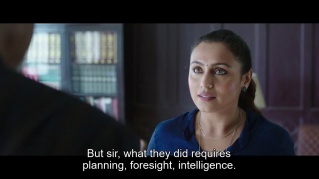 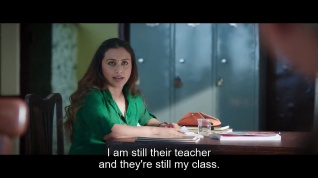 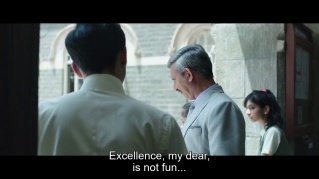 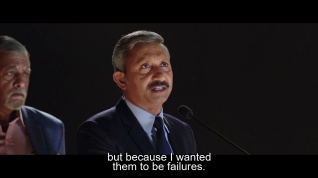 Every hero needs a villain, and the honours go to Neeraj Kabi as Mr Wadia. He is a protector of the status quo, a gatekeeper against the influx of undeserving poor. He hates everything Naina stands for, but despite this is one of the few teachers at the school who will actually speak to her. He constantly tries to get her kids expelled and his students, the golden children of 9A, follow his lead. I’d like to make his final speech compulsory viewing for all actors who have to deliver a big emotional capitulation. He nails the emotion but doesn’t get stuck in the cheese. 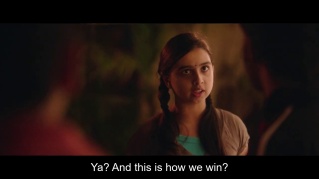 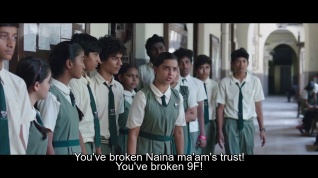 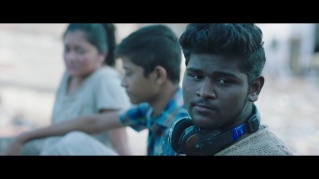 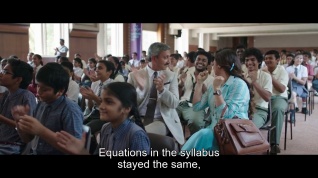 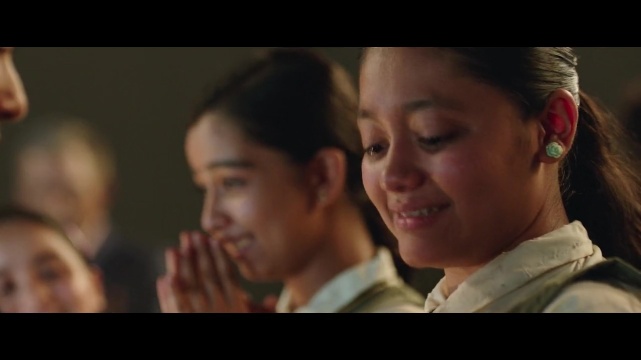 Although the story was super predictable, the film played with my expectations in a few ways. I had a giggle at Naina’s mum being played by Supriya Pilgaonkar who is maybe 10 years older than Rani, which surely reinforces Rani as a genuine box office Hero. And although Naina’s dad and her student Aatish did have some character development and growth, they weren’t given the red carpet treatment just for catching up to the rest of the world. Instead when it came time for a tangible recognition of excellence, it was the girls who were rewarded for their capability and persistence. I was particularly fond of fiery little Oru (Sparsh Khanchandani) and shy unless he was rapping Ashwin (Benjamin Yangal). The soundtrack by Jasleen Royal is integrated into the drama with just a few montages to hammer the message home. Songs that involve the students tend to have a more improvised and frenetic beat where other songs suit Naina’s introspection and exploration. It’s a shame to have Rani and no big dance number but it just wouldn’t have worked within the film. So it’s just as well they did a promo track to add some colour and movement and hit you over the head with that message again!

I am always keen to see films with great female characters who have agency. I wasn’t blown away by the tried and true story but I was delighted by Rani. It’s also nice to see a film that is gently subversive in a mild and family friendly way. 3 ½ stars!