It’s rare that a Tamil film gets a round of applause from a Melbourne audience, but that’s exactly what happened at the end of Vikram Vedha last night. And well-deserved applause it was too. Pushkar-Gayathri’s crime drama pits a righteous police officer against a ruthless criminal, but the line between the two rapidly becomes blurred with a series of moral dilemmas that throw Vikram’s beliefs into question. Both Madhavan and Vijay Sethupathi are outstanding and with a well-written story, clever dialogue and insightful characterisations, Vikram Vedha is an absolute gem of a film and definitely one not to be missed.

Madhavan’s Vikram is a member of a police task force whose mission is to remove notorious gangster Vedha (Vijay Sethupathi) and his men from the streets. Vikram is totally convinced that he is on the side of the angels and that the men he kills deserve to die, which as he continually states, means that he has no problem sleeping soundly at night. However, almost immediately Vikram hits some dodgy moral ground when he shoots in cold-blood one of the gangsters who tried to surrender and then reworks a crime scene to his team’s advantage. Already Vikram doesn’t seem quite as shiny white as he wants the world to believe, although as a police officer he stills stands on the right side of the law.

Vedha continues to elude Vikram and his men, resulting in a planned raid into the area of North Chennai where Vedha is rumoured to be hiding out. As the numerous police officers and riot police are gearing up, ready for action, Vedha calmly walks into the police station and surrenders. As entrances go, this has to be one of the best, particularly since no-one seems to recognise the gangster until he sets off the metal detector alarm as he walks into the building. Vijay Sethupathi is always good in the role of a gangster, but his swaggering Vedha is brilliantly executed here with exactly the right amount of confidence and bravado to suit a character who calmly surrenders to a room full of armed police.

Vedha’s surrender seems like sure suicide, but he’s planned everything well in advance, and without any evidence the police can’t hold him. However once faced with Vikram in a cell, Vedha starts to tell him a story which ends with a moral conundrum. The question posed at the end starts to lead Vikram to realise that the world isn’t as black and white as his and Vedha’s respective shirts, and that sometimes the identity of the bad guy is not as clear-cut as first seems.

Vedha is released by his lawyer who happens to be Vikram’s wife Priya (Shraddha Srinath) which leads to another moral dilemma for Vikram. What do you do when your wife is representing the criminal you’re trying to kill in an encounter? Priya is a strong character who won’t back down and refuses to let her husband destroy her first chance to make a name for herself in Chennai. The scenes where the two work to resolve their fundamental differences in opinion and approach to Vedha are brilliantly written and work well as another factor in Vikram’s gradual realisation that good and bad are just relative terms. 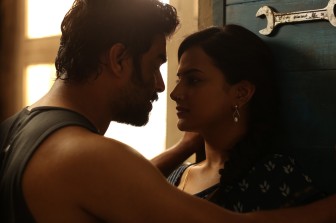 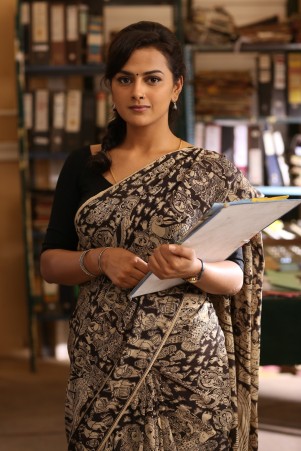 As the film progresses, Vedha manages to tell Vikram another two stories, always ending with a question about what is the ‘right’ action to take in each situation and that Vikram struggles to answer. The situation becomes more and more tense after Vikram’s best friend Simon (Prem) is killed during the investigation and Vikram is desperate to know why Simon died. But as Vedha’s tales seem to be leading Vikram to a greater understanding and may hold the clue to why Simon died, they also add more and more grey into his previously monochrome view of the world. 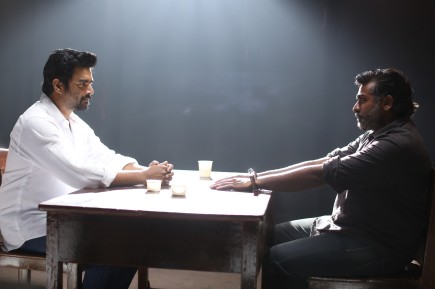 Each story is told in flashback and introduces a number of key characters including Vedha’s younger brother Puli (Kathir) one of the men shot by Vikram in the raid at the start. Varalaxmi Sarathkumar plays Puli’s wife Chandra, another strong character whose behaviour as a child is an excellent foreshadowing of her actions as an adult. I loved her character, particularly when her immediate reaction to Puli slapping her was to slap him back straight away, and her down to earth attitude was wonderfully normal in the middle of all the intrigue and drama associated with Vedha and his gang. 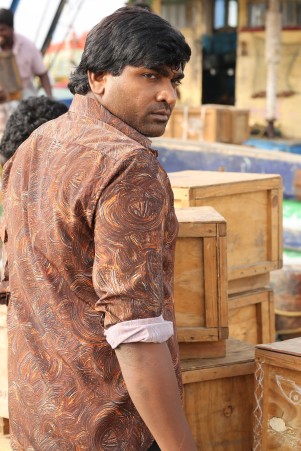 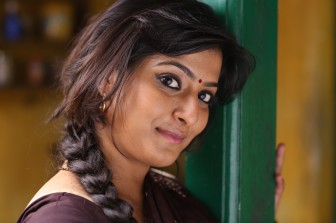 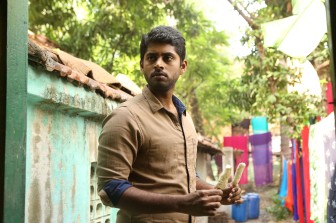 Madhavan and Vijay Sethupathi work together brilliantly and the chemistry between the two is the main reason why the film works so well. Madhavan is perfect as the gravel-voiced cop who strongly believes that he is always right (and good), while Vijay Sethupathi completely gets into the skin of a Chennai gangster out for revenge. The short flashbacks are beautifully put together to highlight the main clues, but there are so many twists that the final outcome is kept relatively obscured until close to the end. Kudos to the make-up team who successfully aged the characters naturally and the wardrobe team who managed to find so many different shades of grey for Vikram and Vedha as the story progressed! The shift in clothing sounds really obvious, but it’s done subtly and is more effective than it sounds, particularly as the changes echo the shift in Vikram’s thinking. The premise of what is good, what is bad, and how can we really tell is intertwined throughout every part of the film which also works well to highlight the change in perception Vikram undergoes as he learns more about Vedha and his life.

It’s not just the storyline and the performances that make the film so watchable. P.S. Vinod’s cinematography is excellent while the background score by Sam C.S. enhances the action without becoming intrusive. The songs fit surprisingly well into the narrative without disrupting the action and of course  it’s always a treat to watch Vijay Sethupathi shake a leg – especially as part of a drunken gangster party!

Vikram Vedha is such a clever film, but Pushkar-Gayathri never get too carried away by their own brilliance and keep the underlying story simple. The mixture of morality, crime thriller, action and suspense are expertly blended together without making the central debate of good vs bad either preachy or clichéd. I totally enjoyed every single minute of Vikram Vedha and it’s definitely a top contender for my favourite film of the year. Simply perfect!