Ranjith’s Thirakkatha is supposedly inspired by the relationship between Srividya and Kamal Haasan. I have zero interest in the love lives of celebrities but this is also a thoughtful look at the film industry, it’s a reasonably sane romantic drama except when it isn’t, and Priyamani steals the show.

Warning, spoilers ahead! There are some things that struck me so hard I don’t want to omit them. 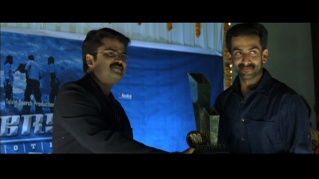 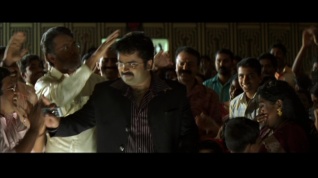 Young gun director Akbar Ahmed (Prithviraj) is awarded for his first film hitting 100 days. He is given a trophy by industry legend Ajayachandran (Anoop Menon). Ajay’s internal monologue is all about himself and how he fought the odds to become a star. Certainly judging by some of the chatter amongst other guests, he is not universally loved. Akki is inspired to make his next film on the story of Ajay and his ex-wife, the star actress Malavika (Priyamani). She hasn’t been seen in years and nobody really knows much about her, despite all the gossip. Akki obtains diaries and letters written by director Aby Kurivilla (Ranjith himself) from his son Appu (Vineeth Kumar), and starts to piece their story together from both the private and public sources. The film unfolds through a series of flashbacks, interspersed with Akki telling the story as he knows it to his crew. When it seems that a story is all they have, they locate Malavika. Now terminally ill and alone, her life is a far cry from Ajay’s success and acclaim. What happened, and why? 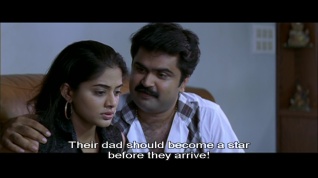 Anoop Menon had to battle with some unflattering wigs and 80s attire that did an excellent job of obscuring his alleged charms, but Ajay’s determination is loud and clear. His break came playing a villain opposite Malavika and some producer’s nondescript son. He fell for Malavika at first sight, his heightened emotions helping him deliver a convincing performance. Whether shyly flirting with Malavika or pushing his career agenda, he didn’t back down when reminded of what people saw as his place. Ajay is obsessed with success and Malu was a lucky charm for his films. After a secret registry office wedding, Malu fell pregnant and planned to stop acting and be a mum. Ajay had been in a string of flops and was relying on Malu’s box office pull for their next movie to rescue his career. He told her she was ruining his life in favour of an unborn child and persuaded her to have an abortion, triggering events that ended their marriage. When Ajayachandran finds out about the movie, he tries to divert Akki to making a film with him rather than about him. Even Ajay’s wife thinks he’s a selfish bastard. Ajayachandran’s father was a makeup artist and people are snide about his lowly beginnings even now he is a legend. He became a big hero, but sometimes petty villain seems more his calling. Anoop Menon is most convincing as the selfish Ajay with his ambition and inferiority complex driving him. He benefits from a kind of halo effect in scenes with Priyamani, but seems lacking in the emotionally complex moments.

Malavika is a reluctant star, with a pushy ex-star stage mum (Mallika Sukumaran) and a loyal, almost silent assistant, Valarmathi (Surabhi). She’d rather get a job after graduating, but her mum hit Malu with a guilt trip of how she had to dance on film to raise her family and now the alcoholic dad is gone there is no money. Malavika is an assertive girl with everyone but her mother. I like the way she firmly shooed Ajayachandran away when she needed a moment between scenes. The flashbacks show all the drama behind the scenes as well as the vintage acting and dance styles of the early 80s. 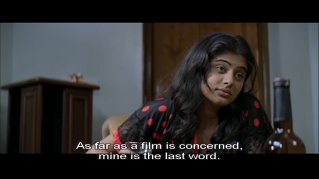 Priyamani is just gorgeous, deftly showing Malavika’s star quality (the camera loves her), and her more pragmatic everyday personality. She berated Ajay for learning to kiss from watching local films, cheerfully telling him classic French films were the best reference. I loved Malu’s confidence in herself and her growing understanding of her power in the film industry. She has a drink with a producer but when he makes a pass she is comfortable and articulate turning him down. She doesn’t want to change who she is and she won’t be pressured or made to feel ashamed. Priyamani’s performance kept me invested in the story through even the most melodramatic plot contortions.

Malu is told that during the abortion they found a growth that had to be removed. Later on her doctor friend Vasanthi tells her that Ajay lied – He requested that her tubes be tied so she won’t fall pregnant. It turns out this is not exactly true but that did nothing to quell my outrage. Firstly, bullying her into an abortion when she clearly wanted the child – BAD. Not telling Malu about the medical situation and not getting her consent or allowing her to have any part of the decision – BAD. Persuading the doctor to keep a cancer diagnosis from Malu so she would make another film instead of perhaps getting treatment that may have saved her life – BAD. Ajay believing that he was right because he wanted her to be happy and she would be happy when he was happy and he would be happy when he was a big star – BAD. Akki bringing Malavika to his place to recuperate although she didn’t know him at all, which is a nice gesture but once again there was no consultation with the actual patient, so therefore – BAD. The doctor who let Akki take a terminally ill stranger away just because – BAD. Everyone including Malavika apparently forgiving Ajay because he felt so sorry (for himself) – WTAF?!?

Ranjith is disparaging of some practices in his industry, calling out examples and mocking the results. Akki is very much the guy who got there because of his passion for film making. He’ll sign with a producer but he won’t let them dictate what he does. The line between life and story fodder is also explored through Akki as he grows closer to Malavika and has to decide how and if he will use her story for his career.

Prithviraj is low key and generally likeable as Akki. He is hampered a bit by the narrative structure that uses his character as an agent of voiceover, and from being in the modern day part of the story which is for me the least interesting. He works with a small group of trusted friends, running a restaurant with them in between films. Akki is prone to the unilateral decision, and most of his friends are followers. I was sometimes annoyed despite his good intentions just because he was so self-righteous. Akki and his capable girlfriend Devayani (Samvrutha Sunil) have a no fuss relationship and make a nice couple. As Malu and Ajay’s romance is explored, they realise maybe they need to think about theirs.

The songs (by Sharreth) fit better in the flashback. Onnodu is a random and quite uncoordinated song between prologue and titles, perhaps just there for the Prithviraj fans.

There is so much that I liked, but the flaws are equally striking. Some of the discussions about film making felt out of synch, but I liked the extra layer about interpretation and storytelling. Ranjith handled the multiple timeline structure more deftly in Paleri Manikyam, but the 80s flashback section is a highlight. 3 ½ stars! (BIG deduction for the medical ethics)