Goliyon Ki Raasleela Ram-Leela* is mostly what I expected from Sanjay Leela Bhansali. It’s visually lush, with opulent sets, stunning landscapes, gorgeous costumes and lovely people to wear them. The movie opens with a looong stream of credits for Bhansali (producer, writer, director, editor, music director) including acknowledgement that Ram-Leela is inspired by Shakespeare’s Romeo and Juliet. Knowing the story and probable ending in advance raises the question – will the journey be worth it? Well, yes. I was pleasantly surprised to find myself entertained and interested most of the time.

Ram gives Ranveer Singh the opportunity to play both the prancing peacock and the traumatised young man who has been immersed in violence all his life. He makes a Rajnikanth-esque entrance, and springs straight into Tattad Tattad.

The choreography is disappointing – a friend calls it the Dandruff Song because of all the hairography. But based on audience reaction, they got the amount of shirtless shimmying about right. And his chest-oiler must have been working overtime, yet they were not named in the end credits which seems a sad oversight. Ram is obsessed with sex, with enjoying his life (especially sex) and has a cunning plan to take revenge on the enemy Sanedas (by having sex with their womenfolk). He admits that his thinking apparatus may be located in his pants. But Ram is also the one voice asking whether his side, the Rajadaris, should try to stop the cycle of killing. He is a mercurial creature, a natural leader but one with an unpopular message. I really liked Ranveer’s energy, his slightly self-mocking delivery of the deliberately cheesy lines, and his passionate sincerity when he confronted Leela.

Deepika Padukone looks stunning and she has also crafted a good performance. This story is very familiar and requires logic suspension which means that the chemistry has to glide over any plotholes. I’ve often felt she struggled to show warmth with some co-stars, not so here. Sparks fly from Leela’s first sight of Ram in a rain of colours at Holi to the verbal sparring as they trade rhyming couplets. Leela is as interested in pursuing this relationship as he is, and she is not afraid to initiate intimacy or sort him out when he misbehaves. She also seems a bit smarter than Ram, and more cognisant of long term consequences. Deepika is convincing throughout, whether playing the giddy Leela falling in lust, dancing her heart out, or as the saddened serious young woman confined by the past.

The minor roles are interesting, especially the key female characters. Supriya Pathak is impressive as Baa, Leela’s mother and the leader of the Sanedas. Ultimately she is the one who will have to decide for the future, and she is a powerful, brooding presence. Richa Chadda plays another of her smart women in a regressive male dominated world (think Fukrey, Gangs of Wasseypur) and she is excellent as Leela’s sister-in-law Raseela. Barkha Bisht plays Ram’s sister-in-law Kesar, and she is equally good. The sisters-in-law give voice to the emotions of both sides. Both are widowed in the same stupid macho incident, and both women remain integral to the story long after their husbands are gone. Sharad Kelkar and Gulshan Devaiah round out the more significant male support roles. I was delighted to see Raza Murad as the Sarpanch even though his role was largely to provide ‘As you know Bob …” exposition. Abhimanyu Singh’s career mystifies me. He’s a terrible actor. He even overacts when he is supposed to be dead! And seeing Priyanka Chopra’s lacklustre item number made me grateful Deepika got the lead.

The costumes are not just gorgeous, they reveal something about the characters. Leela wears a modern lehenga but the underskirt is a traditional patterned fabric. Kesar’s dark shawl signifies her position, but it’s lined with a light patterned fabric. Baa wears masses of ostentatiously heavy jewellery, showing her wealth and the strength to hold on to it. 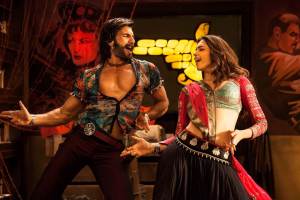 Ram wears floral shirts edged with multi-coloured mini pom-poms and his holster is brightly embroidered. And there are guns EVERYWHERE. Like Leela, he carries his heritage with him. Many of the dances are garba style (showing off the excellent costumes) and most centre around religious celebrations (more colourful folkloric costumes). Everyone lives in old style houses but all the ladies whip out phones to film Ram strutting his stuff.  There is a sense of the ‘modern’ world invading this village where families have feuded for 500 years.

Despite being less hidebound in their views, it doesn’t take much to make Ram and Leela each accuse each other of being a typical Rajadari or Saneda, just like ‘them’ as things turn sour. You don’t have to scratch the surface too hard to reach the inculcated mistrust and stereotypes. But after a cracking start, Bhansali loses control in the second half where the repetition of crisis and non-resolution becomes a little tedious.

I can’t help comparing this to Sunil Dutt’s stunning Reshma aur Shera and Baz Luhrmann’s excellent Romeo + Juliet, and while I like Ram Leela it comes up well short of both. Dutt expressed the tragedy and beauty of a doomed love in Rajasthan with fewer filmi tricks and greater emotional impact and maturity. Luhrmann stuck closely to Shakespeare and was still playful and original. Bhansali gestures towards Romeo and Juliet, mostly in the balcony scene which he recreated quite closely down to the dialogue. But he refers to iconic scenes in his own films as much as he does Shakespeare. He needs to curb the self-indulgence, and to edit with more eye to the story.

I’d definitely recommend seeing this in a cinema for the beauty and visual impact. The songs alone are worth a look and I had fun guessing which choreographer did which. I expected this to look great, and often that is all I get from Bhansali films as I just don’t connect with them. I didn’t expect Ram-Leela to be quite so entertaining and engaging.

*None of the marketing material or cinema listings here in Australia seem to have been changed so the film is still listed as Ram Leela.

What? You want to see the colourful embroidery and outfits in detail? Here you go. Because I care.

Heather says: I wasn’t expecting to enjoy this as much as I did. Sure, I knew it would be beautiful and I’ve been enjoying the soundtrack, but the performances from all the actors put this a notch above the usual SLB film.  Deepika in particular was a revelation and she seems to have been steadily improving with each film.  I used to find her wooden and somewhat tedious, but she really sparkles here in a role that gives her scope to show a number of different emotions as well as the smoking hot chemistry with Ranveer that Temple has mentioned. Phew!  I’ve only seen Ranveer once before and from his initial appearance in  Tattad Tattad I was expecting him to be woeful, but such is not the case.  He rises to the occasion (cough, cough) and is so much better than the 70’s porn star outfits suggest.  His swagger and bravado are just part of his persona and his Ram is full of passion and joy. Best of all though are the support female characters played by Supriya Pathak, Barkha Bisht and Richa Chadda.  As Temple has described, all had meaty roles that allowed them to be real people with varying emotions and motivations which gave more layers to the film.

However, as with every SLB film I’ve seen, Ram Leela could have done with a heavier hand with editing and the last hour had moments where it really did start to drag.  Still – the costumes are sumptuous, the scenery is beautiful and the performances were of a high enough standard that I completely agree with Temple that this is one to see on the big screen.  Ram Leela was much more entertaining than I expected and I thoroughly recommend it as one of the better Hindi films I’ve seen this year.