While Bollywood has just started to show kissing scenes and Hollywood is slowly integrating gay storylines into films, director Onir has moved much further ahead with his latest film. I Am is a confronting and thought-provoking collection of 4 stories which deal with subjects commonly not spoken about in public and rarely seen in mainstream film. In addition to its subject matter, the film is novel in that funding was partly achieved through social networking and has over 400 producers. Onir and Sanjay Suri initiated a page on Facebook where people were invited to sign up to help finance the film or volunteer their time. Manish Malhotra for example designed the costumes for free and many of the actors did not receive any remuneration. Also, somewhat unusually, there are three directors who appear as actors in the film; Anurag Kashyap, Anurag Basu and Nandita Das. I Am has won acclaim in a number of film festivals, a number of awards already, and luckily for us premiered in Australia as the closing film for the Indian Film Festival. As an added bonus, Onir and Juhi Chawla were present at the screening I attended in Melbourne to introduce the film and to take part in a Q and A session afterwards. My favourite actress, a director whose previous work I’ve enjoyed and his brand new film all adds up to a perfect way to spend an evening. 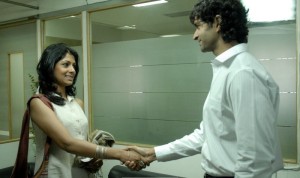 The four stories are loosely linked together by friendships, connections and chance meetings between the characters, and this works well as a connecting thread without feeling too contrived. The first story is Afia’s (Nandita Das)and deals with her determination to have a child by herself after her divorce.  Her friend Megha (Juhi Chawla) speaks as the’ voice of society’ condemning Afia for what she perceives as selfishness and the story raises a number of questions around the issues of single parenthood and artificial insemination versus adoption. The debates between Afia and Megha are honest and natural and the conversations Afia has with a number of her male acquaintances as she looks for a sperm donor ring embarrassingly true. Onir described Afia’s story as the most ‘Bollywood’ and it does follow a more traditional story telling path compared to the rest of the film.  I don’t relate to this story personally as Afia’s decisions would not be mine, although I mainly agree with her right to choose.

The second story is Megha’s own and describes a trip she makes back to Srinigar for business, having left the area some twenty years before with her family as part of the Kashmiri Pandit evacuation. She stays with her childhood friend Rubina (Manisha Koirala) and the contrast between the two women; one who was forced to leave and one who had to stay, forms the focus of this section. The suffering on both sides is evident and Rubina envies Megha’s freedom of living in Delhi away from the continual threat of fighting. Megha in turn resents having had to flee the violent attacks on her family.  Srinigar looks very similar to my home town of Belfast in the seventies, with bombed out buildings, soldiers everywhere and the ubiquitous presence of barbed wire.  But behind the rubble there is still beauty in the landscape and Onir manages to capture this equally as well as the devastation. This was a very touching story and I was surprised to read in the statistics at the end of the film just how many people were displaced as this is something I know very little about.

The third story is that of film maker Abhimanyu (Sanjay Suri) and deals with the taboo subject of child abuse. We see that Abhi was abused by his step father as a child and this is his story about finally being able to speak up about his childhood. Abhi has recurrent dreams of his mother and many of the scenes also have a dream like quality as if Abhi can only bear to relive them a step removed. There is a well-defined contrast between Abhi’s party life style and large group of casual friends and the scenes where he confronts his past with his close friend Apama.  Throughout the story Abhi is conflicted about his sexuality and his childhood experiences have had an obvious effect on his ability to form relationships. This is a very difficult subject to film but Onir and Sanjay manage to deal with it sensitively and the story is well told.

The final story is the most shocking for me in many ways, not because it features men kissing, but because of the events that follow. This is Omar’s story and explains how Section 377 of the Indian Penal Code is used to extort money – and more – from homosexual men. Omar is a hustler picked up in a bar by Jai before they are spotted by a corrupt cop. The confrontation is graphic and detailed, and it’s very disturbing to know that it is based on true accounts.  Onir expressed his amazement during the Q and A session that the film got through the censors without getting any visual cuts (mainly referring to this story) and I am amazed along with him. Some of the dialogue was muted, however the subtitles were abundantly clear as to the viciousness of the scene depicted despite the many ****’s. Rahul Bose as Jai was incredible in this and was able to effectively portray subtle changes in Jai’s mannerisms as a consequence of his experience. I am very impressed with his performance as he really made me believe this story, much as I didn’t want to.

The film starts with an easy to digest story and ends with a truly sickening one. The progression is deliberate and the style of shooting changes along with the dialogue delivery. Afia’s story is shot with open angles and plenty of space, but by the time we reach Omar’s story the style is much more closed in and claustrophobic. The dialogue becomes more graphic in each story as does the action on-screen. I find it hard to describe my feelings about this film – I can’t say that I enjoyed it, because I felt too uncomfortable while watching.  And it’s not a film to be enjoyed as such anyway. It is brilliantly filmed – the actors are outstanding and the stories themselves are very well written and I can appreciate it as a work of art. It would be more accurate to say that I enjoyed the experience and think that the film is excellent, just not one for everyone’s tastes. Thought-provoking and challenging, I Am gets 4½ stars.