I’m loving the recent ‘new wave’ in Tamil comedy that seems to be producing hit after hit and some very funny films. Naanum Rowdy Dhaan is the latest release from writer/director Vignesh Shivan and it’s a perfect example of the genre, mixing a good story with great dialogue and brilliant performances from a very competent cast. As an added bonus the film even has grammatically correct English subtitles (I’m going to assume that they were accurate too), ensuring I was laughing at the right moments – or at least along with everyone else.

The story is set in Pondicherry, which is another plus for me since it’s only a few years since I visited and quite a few of the locations were familiar. Pandi (Vijay Sethupathi) first appears onscreen as a young boy (Surya Vijay Sethupathi – Vijay’s son?) sitting in a jail, occupied with filling in the front of a school notebook with his interesting ambition (given his current location) of joining the police force. However all is not as it seems. Pandi is the son of the police inspector (Raadhika Sarathkumar) and the real occupant of the cell is Raja, played by one of my favourite ‘bad guys’, Rajendran. Yay! While waiting for his lawyer and get-out-of-jail-free card, Raja tells the young Pandi a story about a rowdy and a cop, when Pandi asked which is the better job prospect. The subsequent tale has the effect of changing Pandi’s mind about his career choice and he carefully changes the word in his notebook from police to rowdy.

So it’s a little surprising then when we see grown up Pandi to find he is going through a battery of tests to become a police officer, although he spends most of his time telling others how much better rowdyism is compared to law enforcement. But once away from the testing area Pandi is indeed a rowdy. Well, kind of.

Along with his gang of friends he has a lair painted with fluorescent paint on the walls that lists fees for various acts of violence, but when it comes down to it he doesn’t actually do any of these things. Instead the gang enacts a drama, getting people to pretend to have been beaten up or injured and then sending a photo of the ‘injury’ to the client. Pandi’s biggest success is arbitrating in a schoolboy squabble and most of his ‘swagger’ is an elaborate act without any real substance.

But then he meets Kadambari and gets involved in the search for her missing father. Kadambari is hearing impaired after an injury and her father is a police officer on the cusp of retirement. It turns out that the story Raja told at the start of the film was based in fact with the rowdy, Killivalavan (Parthiban) getting the better of police officer Ravikumar (Azhagam Perumal). Kadambari wants her revenge and since true love means killing your girlfriends enemy, Pandi takes on the job. Or at least offers to hold Killivalavan while Kadambari stabs him to death. A true gentleman! 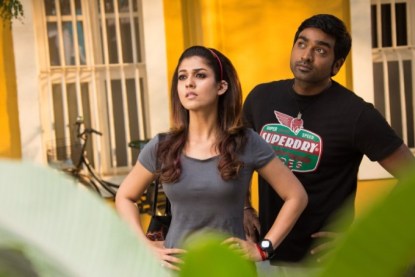 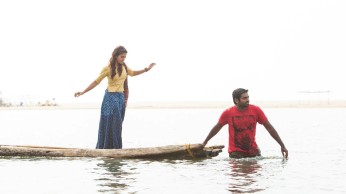 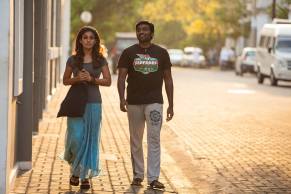 The jokes come thick and fast from the numerous attempts to kill Killivalavan (or at least get him to apologise) to Raja’s gun that has a silencer that mews like a cat. The dialogue is very funny and the cast all do a good job in delivering their lines for maximum effect. Even Nayantara, who has a brilliantly comedic scene when she is kidnapped by another rowdy (Anandaraj) which had everyone in the cinema in stitches. Generally Nayantara is much better here than she was in Masss, giving her character plenty of personality and managing good chemistry with her co-star. She does well with the comedy too, and shows just what a good actress she can be when given the chance. 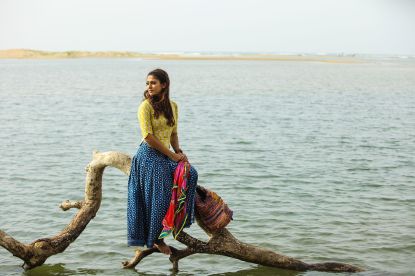 Vijay Sethupathi looks amazingly different here from his previous roles such as Soodhu Kavvum or Idharkuthane Aasaipattai Balakumara. Without his beard he appears years younger and seems to have shed some bulkiness along with the age which suits his character well. He still has the same great timing and flair for comedy though, working well with RJ Balaji in the role of Pandi’s long suffering friend. Balaji plays it straight but has plenty of witty comments and his delivery is perfectly timed. Together the two make a great pair and the dialogue between them is written so well as to appear natural and unforced – something which is rare in most comedies. Pandi tries very hard to be a tough guy, and when push comes to shove he proves he can hold his own, but he’d much rather just show the ‘tude rather than court any confrontation, while Balaji wants nothing to do with ‘real’ rowdyism at all. 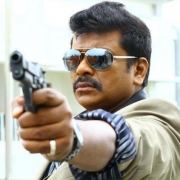 Anirudh Ravichander provides the music and the soundtrack fits into the mood of the story well. Vijay Sethupathi skilfully avoids any actual dancing, and the songs themselves work well to move the romance story forward. George C Williams is the man behind the cinematography and as in his earlier films, he has a sure touch with the camera ensuring the film looks perfect too. Overall Naanum Rowdy Dhaan is an excellent entertainer combining action and comedy with a dash of romance. Recommended for Vijay Sethupathi, Nayantara and a very funny screenplay.