I love this film!  Nalan Kumarasmy’s début calls to mind shades of  Lock, Stock and Two Smoking Barrels or Shallow Grave, and manages to pack in plenty of comedy, action and general all round craziness in a run time of just over 2 hours.  The film centres on a kidnapping caper but there are so many different ideas tossed in, and the plot development initially seems so haphazard that perhaps the most astonishing thing is how well everything does make perfect sense at the end.  Soodhu Kavvum is essentially a dark comedy where a number of seemingly unrelated people and random happenings are thrown together into what turns out to be a funny and intelligently written storyline. Not all of Kumarasamy’s unconventional ideas hit the mark, but with inspired performances from a great cast, Soodhu Kavvum is one of my favourite films from last year and a definite must watch.

The story follows the exploits of Das (Vijay Sethupathi), his imaginary girlfriend Shalu (Sanshita Shetty) and three friends who become involved in the kidnapping caper.  There is also an ‘honest politician’, his lazy son and a psychotic police officer who never speaks, along with many other slightly off-the-wall characters who each have their own reason to be in the mix.  Each character has a number of strengths and flaws that makes them more interesting to watch, but also to some extent explains their various motivations and why they react as they do to each new crisis. Everyone is introduced in a way to showcase their personality and then slowly Kumarasamy draws all the threads together to make a coherent whole.  It’s cleverly done to keep interest in the main protagonists even when all of them seem quite typically normal, everyday people and none are particularly likeable. 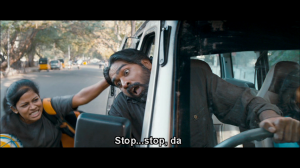 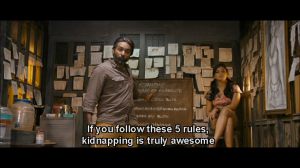 Vijay Sethupathi is the absolute star of the show here and is completely unrecognisable as Das, a more middle-aged and careful character than I’ve seen him play before.  Das is considered and thoughtful, almost gentle despite his criminal tendencies although he still appears quite manic when required.  Vijay really does appear much older here, it’s his mannerisms and stance rather than just make-up, and he perfectly blends a rational approach to his criminal activities with just a hint of mania as he argues with his non-existent girlfriend – or is she? That’s one of the delights of Soodhu Kavvum – just as you think you have a handle on what is happening and where the story is going, Nalan Kumarasamy sends it off in a completely different direction and introduces new characters seemingly out of nowhere. Except if you were paying attention (or watch it again!), they are there in the background all along. 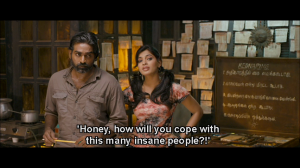 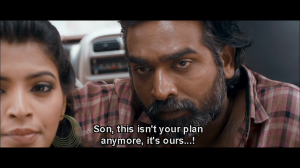 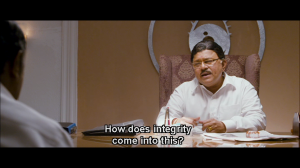 Das has developed a strict set of rules for his ‘kednapping’ business but a lack of manpower has caused him to rethink his tactic.  After a chance meeting with three friends in a bar, he offers them the opportunity to join his kidnapping team.  The three friends have their own problems; each is out of work and looking for a way to earn some easy cash.  Pagalavan (Bobby Simha) has moved to Chennai to stay with his friend Kesavan (Ashok Selvan) when he ran into a spot of bother in his native Trichy.  This involved building a temple to actress Nayanthara and the reactions of first Kesavan and then his friend Sekhar to this news speak volumes for their respective characters.  Sekhar (Ramesh Thilak) is an out of work hotel car park attendant who gets up early and gets ready for work every day, but then sits and drinks his way through a bottle of whiskey.   There is a quick blink and you’ll miss him appearance of fellow director Karthik Subbaraj in the scenes that describe how Sekhar lost his job which is pretty cool. Bobby Simha is also excellent and completely unrecognisable from his recent appearance in Jigarthanda, although his performance here is just as impressive. 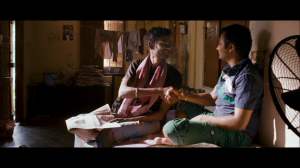 Everything goes pear-shaped when Das accepts a commission to kidnap Arumai Pragasam (Karunakaran), the son of inconveniently honest politician Gnanodayam (M.S. Bhaskar). For all of his lauded refusal to take bribes and capitulate to corruption, Gnanodayam is a very grey character as he entraps industrialists hoping to bribe him in the usual fashion, and is also abusive to his wife and son.  Karunakaran is superb in his role as the lazy and dishonest son, and his laconic delivery of his lines is excellent. Just look too at his excellent ‘uncle-dancing’ skills in this song where he celebrates the joys of money.

Yog Japee turns up in the second half as slightly unhinged police officer K. Bramma. There is an excellent montage of fights to show how he drags information out of the Chennai underworld as he tries to track down the kidnappers. Rather than the usual biffo in more conventional films, this is fast, mean and ugly and fits perfectly into Bramma’s persona. Truly he is the malefic effect of Saturn personified! 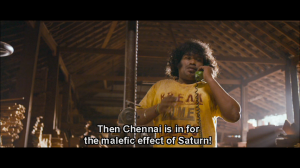 Soodhu Kavvum does have a few moments that don’t succeed, and the sheer number of twists means that it doesn’t work quite as well on a second viewing – although I did get almost as much enjoyment out of spotting the different characters in the background before they appeared in the main narrative. What I do love about this film is that the story is just as important as any individual character, and almost every moment is spent moving the narrative forward.  Each character has a role to play and at that point, they are the most important person in the scene.  I really like that there is no over-blown romance, no idealistically perfect hero and no mass fight scenes. It’s just a good story, well told with excellent actors delivering great performances.  4½ stars.