Soori’s 2015 release is an excellent thriller that skilfully blends a romance, a police investigation and a road trip into a gripping story. Newcomers Vikky Varun and Manvitha Harish are excellent as the young couple on the run from the law, but everyone in this fast-paced crime drama performs perfectly, aided by the clever screenplay and superb cinematography. It’s clever, well-written and has realistic characters that generally behave as expected – all points that ensure this is a film I thoroughly enjoyed. 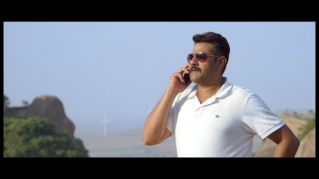 The story is written by Surendranath and there are three distinct threads with a couple of side incidents that together make up the plot of Kendasampige. This film is called part 2, although Kendasampige is complete in its own right, but there are a number of hints throughout that it is part of a much greater whole. If Part 1 (which is yet to release) and the subsequent Part 3 are anywhere near as good, then this promises to be an excellent trilogy indeed.

The first thread deals with a group of corrupt cops, Narayanaswamy, Chandrasekhar, Govindaraju and their boss DCP Suryakanth (Prakash Belawadi). The film begins with three of them stashing money they have stolen from a drug raid in a well, although one of them appears unhappy with the proposed split of their ill-gotten gains. While these cold-hearted and mercenary police officers are important to the main story, this is where I presume the prequel will clear up some loose ends since Kendasampige starts after the group have stolen the drug money and DCP Suryakanth has executed the gang members involved. Soori paints a bleak picture of corruption in the police force with just a few short snippets of conversation and this perfectly sets the background for the rest of the story to unfold. 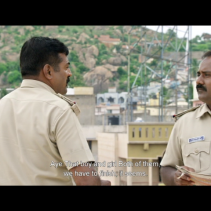 The second thread follows the romance between rich girl Gowri (Manvitha Harish) and working class Ravi (Vikky Varun) who are very much in love despite their social differences and the objection of Gowri’s stylish mother Shakuntala (Chandrika). One of the corrupt police officers, DCP Suryakanth, happens to be in a relationship with Shakuntala, so naturally she turns to him to solve her problem with Gowri’s unwelcome suitor. Suryakanth fakes a drug dealing case on Ravi but on the way from the court to jail, Ravi somehow manages to escape, shooting the police driver in the process. With the police on his tail, Ravi naturally turns to Gowri for help, asking for money in his attempt to escape. However, Gowri is determined to support her man despite his claim to have shot a police officer, and decides to run away with him to ensure they can stay together.

Ravi’s shooting of a police officer starts the third thread – a murder investigation by ACP Purandar (Rajesh Nataranga). Purandar is in charge of the inquiry into Officer Govindaraju’s apparent death but as he delves deeper into the case he realises that all is not as it seems. His first task is to find Ravi but as he is starting his search, Shakuntala discovers that Gowri has run away with Ravi and pleads with DCP Suryakanth to get her daughter back. Ravi and Gowri have to evade ACP Purander and DCP Suryakanth’s two corrupt cops Narayanaswamy and Chandrasekhar if they are to have any chance of a life together. Adding to the tension, the two groups searching have very different plans for the couple and it’s a race to see who will get to them first. 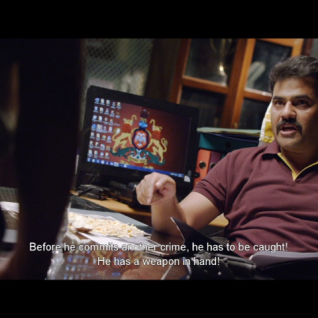 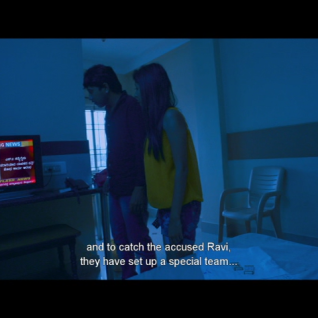 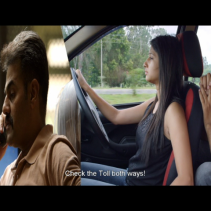 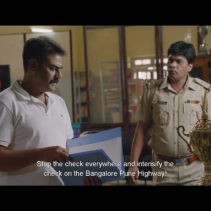 The screenplay by Soori and Rajesh Nataranga (presumably the same Rajesh who plays ACP Purandar) weaves these different threads together perfectly and step by step the whole story is gradually revealed. As with any good crime drama, major events only become clear to the audience once the police investigation reveals the truth, while each action causes a reaction that allows the story to move forward. The different relationships between characters are developed naturally and although the back story for most is brief, there is enough to ensure they appear to act realistically as the plot unfolds. ACP Purander is shown discussing the case with his wife, who also appears to work for the police force and this gives more depth and understanding to his character while providing a good contrast to the more selfish DCP Suryakanth, who is having an affair with Shakuntala but lying to her about her daughter.

The chase is thrilling, although there are no car chases or scenes of Gowri and Ravi running through the streets, at least not until right near the end. Throughout there is a sense of suspense which increases as the net closes in on the young couple and the final outcome becomes ever more uncertain. Soori adds in a few twists which help increase the tension while Satya Hegde’s use of the camera to contrast the light and space evoked by overhead drone shots of each city with the confining spaces inhabited by Gowri and Ravi as they attempt to hide adds further anxiety. 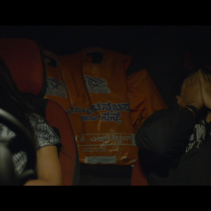 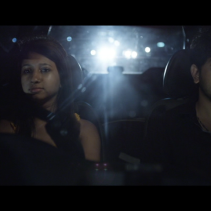 The performances too are all outstanding, particularly by the newcomers Vikky (aka Santhosh) and Manvitha although Rajesh Nataranga is also excellent. Vikky ensures Ravi appears as a typical working class guy who rarely thinks outside of his own small world. His panic and confusion as he is arrested and charged are realistic and his descent into stunned acceptance is also well portrayed. Vikky does an excellent job of portraying a man so far out of his depth that just keeping his head above water is the most he can manage. His life has taught him that he has to endure, and that is what he does, completely allowing someone else to take charge of his life when he is no longer able to cope. Vikky is to be commended on allowing his character to fully display his nervousness and fear, rather than simply devolving to standard hero behaviour when faced with a dilemma and he really is fantastic in the role.

Manvitha is also superb as the confident and more worldly Gowri who is able to deal with every problem and takes control of each situation. Gowri is made of sterner stuff than Ravi and it’s her determination that keeps them on the road and one step ahead of the cops. When she does break down it’s entirely appropriate and it’s only after she is separated from Ravi that she loses her self-control. Gowri is an assured and very positive character and it’s great to see such a strong female role in a film genre that is usually much more male dominated. However, Soori ensures that the duo definitely are a couple – each has their own strengths and weaknesses and despite Gowri’s outward confidence she needs Ravi’s dependence on her in order to keep her own anxieties at bay. It’s a more mature and realistic relationship than I was expecting from the opening scenes and it’s well developed and portrayed by the two young actors.

The music from V. Harikrishna is mainly used as background to portions of the road trip and generally fits well into the narrative. Nenape Nithya Mallige is used to show Ravi’s memories of meeting Gowri but it’s also a great song and the sequence sums up their relationship well.

Everything in Kendasampige works to deliver a well-developed story in a convincing screenplay. The performances are excellent and each character skilfully used to further develop the plot. This is one of the best police dramas I’ve seen from the Kannada film industry and it’s made even better by the inclusion of a road trip through cities I’ve never heard of, but which look interesting to visit, and a romance that’s more realistic and better developed than usual. It’s a short film too, little over an hour and a half, which makes it even more impressive that Soori fits so much into the time including enough character and plot back stories and ensuring plenty of plot development too. I loved this film and can’t wait to see the rest of the trilogy when it does release. But even without the prequel, Kendasampige is not to be missed and I highly recommend it as a complete edge-of-your-seat thriller that impresses on every level. A full 5 stars.