Kaithi was recommended to me as a must-see by many people but the film didn’t release in Australia until this weekend. Word of mouth has been so good that the cinema was full despite reaching Melbourne a week late. And after all the hype – is the film worth it? A resounding yes! Kaithi is a tense action thriller that doesn’t miss a beat, while all the cast are simply terrific, including Karthi in a role that sees one of his best performances. No songs, no dances and no romance track, just all out action, intelligently plotted drama and even a dash of comedy all ensuring that Lokesh Kanagaraj’s latest film is one not to be missed.

The film opens quietly, introducing a young girl in an orphanage who is told to expect an important visitor on the following day. We’re left in the dark as to who she is, and who the important visitor will be, but not for too long. Dilli (Karthi) is a paroled prisoner who is on his way to see his daughter for the very first time. Flashes of his daughter’s restless night as she waits impatiently for morning are interspersed with the action of the rest of the film, adding a strong emotional thread to the narrative as well as upping the stakes for Dilli as he battles his way through the various obstacles in his path. Importantly these scenes add some space around the high-impact action sequences and give us a reason to invest in the outcome of Dilli’s struggles. After introducing Dilli’s daughter the film shifts into fast-paced action with the introduction of numerous characters and the basic story all given in quick succession, which makes these small interludes a clever way to accentuate the action without breaking the overall level of tension in the film. 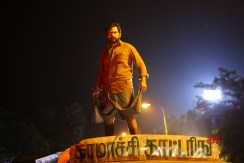 The action starts with Inspector Bejoy (Narain) and his team capturing a lorry load of drugs and other smuggled goods, although Bejoy is injured in the raid. For some political reason the raid has been kept secret, so Bejoy and his men stash the drugs under the police station while throwing the smugglers into the cells above. The team head off to the Chief Commissioner’s retirement bash along with all the senior officers, leaving a few junior police and recent transferee Napoleon (George Maryan) from Tirunelveli at the station. The action then switches to the gangster hideout where Anbu (Arjun Das) is plotting how to get the drugs back and also ensure that the police never know that they have his brother and gang leader Adaikalam (Harish Uthaman) in custody. The smugglers plan to drug the police officers at the retirement party and while they are incapacitated, break into the police station and grab the drugs and Adaikalam. All of which would work except for Bejoy and his decision to co-opt Dilli to drive the truck carrying the drugged police officers to hospital. 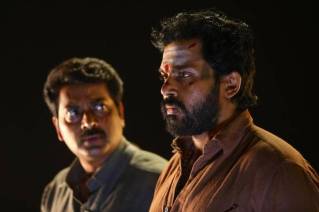 The events all occur over the course of one night which adds to the suspense and increases tension as Dilli and Bejoy battle to save the police officers, stop the gangsters getting to the stash of drugs and prevent Anbu from freeing Adaikalam. Along the way there are double agents on both sides, a group of students who end up barricaded in the police station along with Napoleon and the owner of the truck, Kamatchi (Deena) who is dragged along against his will. The action is a mix of the road trip across rough terrain to get medical attention with periodic attempts by the gangsters to stop Dilli and Bejoy by any means possible, and a siege of the police station by Anbu and his men, all anchored by the strong presence of Dilli who will do anything it takes to ensure he can get to the orphanage and meet his daughter. 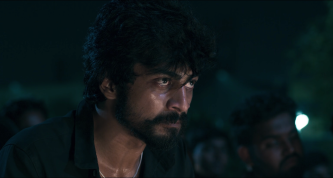 The action sequences are well choregraphed by Anbariv who uses a mixture of one-on-one fights, inventive ambushes and stunts with the lorry to add novelty and interest to the film. Sathyan Sooryan’s cinematography makes the most of the night setting, highlighting the cabin of the truck where Bejoy, Dilli and Kamatchi are literal lights in the darkness of the war against drugs as the gangsters circle around in the darkness of the forest. Car headlights, torches and burning carts provide background lighting for the fight scenes with Dilli in the truck, while the police station, boarded up by Napoleon and the students is lit by moonlight as they attempt to keep the smugglers out.

Each member of the cast is fantastic, starting with Arjun Das as the erratic and bloodthirsty leader of the smuggling gang. He creates an atmosphere of violence simply by snarling at the camera and is a plausibly dangerous villain. Although Harish Uthaman has limited screen time, he is suitably menacing, particularly as he emerges from the gloom of the police cell to threaten the engineering students who have devised inventive methods for preventing his escape. George Maryan is outstanding as the ageing constable, fresh in from the country who ends up the sole defender of the police station and pulls the students into the fight. He is steady as a rock, perhaps because he doesn’t quite understand the magnitude of the force arrayed against him, but his attitude and strength of character are brilliantly written into the story and along with the students his fight against the gangsters is just as compelling and thrilling as that of Bejoy and Dilli.

I loved Narain in Anjathey and he is excellent here as a police officer pushed to the limits by circumstance and desperate to do the right thing. He gets across the internal conflicts that result when he pulls Dilli and Kamatchi into the volatile situation with the gang, and he is also excellent at portraying Bejoy’s helplessness from his broken arm which prevents him driving the lorry himself. It’s a well nuanced performance despite the straight forward character arc, and Narain excels in the brief conversations with Dilli that expose his innermost struggles. Deena too is well cast in a role that adds some humour to the story, but he’s also effective as a voice of the common man who tries to do the right thing despite being terrified by the violence that erupts all around him.

I really like Karthi and have seen most of his films including the excellent Naan Mahaan Alla, Madras and Theeran Adhigaaram Ondru, and in Kaithi he produces another scorching performance to add to the list. As a prisoner, Dilli has learned to keep his eyes down and his mouth shut making Karthi’s slow deliberate movements and measured dialogue a perfect fit for the character. His obvious enjoyment of biryani, eaten while Bejoy is trying to load up the lorry with the drugged police officers is a satisfying nod to freedom and the simple joy of good food eaten leisurely. He’s also excellent when describing to Kamatchi how he ended up in prison, but it’s in the action sequences where he really excels providing a convincing portrayal of a man willing to risk everything to reach his daughter. He gets the emotions just right too, never dipping into maudlin or overly dramatic sentimentality, but still showing the mix of fear, elation and trepidation that would naturally be present in any father going to meet his 10-year-old daughter for the first time. The character is written quite simply, but Karthi adds plenty of depth and intensity that contrasts perfectly with Narain’s more desperate Bejoy.

There are no songs but C.S. Sam’s background music fits the narrative well and helps to drive the action forward. The two different tracks to the story work well with each other to keep the tension level high, especially when it always seems that the defenders will be overwhelmed by the gangsters, and the finale is just as over-the-top and Rambo-esque as befits the indestructible character of Dilli. The film doesn’t feel overlong despite the almost 2½ hour running time but instead stays thrilling and almost claustrophobic with the one-night timeframe and race against time to save everyone. With brilliant performances, a simple but well plotted storyline and plenty of action sequences, Kaithi is an excellent thriller and highly recommended for fans of the genre.