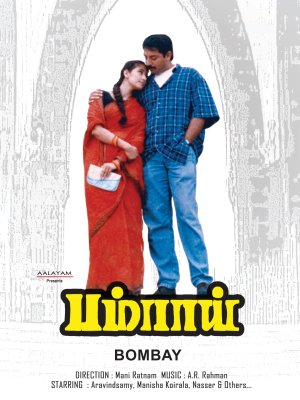 Bombay is the second of Mani Ratnam’s ‘terrorist trilogy’, and is the one that I find the most disturbing. I remember the news reports from the real-life events that happened in Bombay in 1992 which are recreated here in authentic detail, and I find the violence here more confronting and realistic, despite a rather romanticised ending. In Bombay, Mani Ratnam juxtaposes a ‘forbidden’ romance between a Hindu man and a Muslim woman with the Bombay riots to create a compelling and disturbing look at the religious divide in India. The film shows how prejudice can drive extreme acts of hatred but also includes the counter ideals of selflessness and acceptance with an almost fairy-tale spin on good and evil. It’s another stunning film from Mani Ratnam that still makes an impact to-day and along with A.R. Rahman’s soundtrack deserves all the awards and recognition that it has achieved over the years since its 1995 release.

The story starts with Shekhar (Arvind Swami) returning home to visit his family in a river-side village in Tamil Nadu. Just as Shekhar arrives he sees Shaila Banu (Manisha Koirala) and instantly he falls in love. Luckily the attraction is mutual and despite their different religions, a romance begins to grow between the two. Shekhar has been studying journalism in Bombay, which gives him a city sophistication and an intolerance for his father’s prejudiced views. Narayanan Pillai (Nassar) is a devout Hindu whose worst fear seems to be that his son will marry a bride from the North of India, since he is unable to imagine the horror of a daughter-in-law from a different religion. Shaila’s family is just as appalled by the thought of Shekhar and her father Basheer (Kitty) quickly arranges a marriage for his wayward daughter when he finds out about the affair. The clandestine nature of the romance allows for some beautiful camera work from Rajiv Menon and we also get the beautiful Kannalanae as Shaila spots Shekhar at a wedding.

I’ve read that Mani Ratnam wanted these scenes to be beautiful as a contrast to events in the second half, and I find it interesting that his idea of beauty is in the wind and rain that are a constant presence in the village. For me, accustomed to the weather in Ireland, I’d thought that this was supposed to represent the cold attitude of the two families to the romance until I read Baradwaj Rangan’s interview with Mani Ratnam. In Ireland, wind and rain is always cold and miserable, but since visiting Tamil Nadu I can appreciate why gusts of wind and showers of rain would be beautiful in a hot and often dry landscape. Despite knowing this, I still feel chilled when I see the wind whipping Shaila’s veil and skirt around, while the crashing waves and constant rain strike me as cold and gloomy even though I can appreciate the beauty of the landscape.

At the same time, coming from Northern Ireland, where it was just as taboo for a Catholic and a Protestant to start a relationship, I can really relate to the problem faced by Shekhar and Shaila; another reason why I find this film so confronting. The attitudes and expectations of society resonate closely to my own experiences growing up surrounded by religious intolerance and I am always thankful that my own family had a more progressive attitude. It does mean that I can understand their predicament here, and to some extent why their families are so worried as well. Beyond their own antipathy to the relationship there is the worry that society will condemn both Shaila and Shekhar, leading to ostracism and a continual risk to their safety. 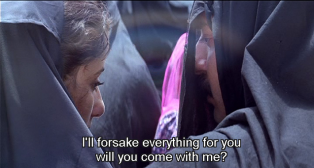 With their families at loggerheads, Shekhar and Shaila elope to Bombay. They quickly get married and before long have two twin boys Kabir Narayan (Master Harsha) and Kamal Basheer (Master Hriday). The boys are named for their respective grandfathers but are brought up in both religions, while Shekhar and Shaila are easily accepted in their neighbourhood despite their ‘mixed’ marriage. But when the Babri Masjid is demolished and riots break out across Bombay, the boys are lost in the city alone. They are caught by a gang of men who terrorise the children, pouring petrol over them and starting to set them alight in a shocking scene full of religious intolerance and hatred. These are two young boys with no idea what religion is, let alone the differences between Hindus and Muslims, and with their brutalisation, Mani Ratnam exposes the full horror of the riots and the absolute inhumanity of the rioters.

While relations between the communities in Bombay are breaking down, Narayanan and Basheer have gradually turned their enmity into a guarded tolerance, so when both travel to Bombay in the wake of the December riots, they are able to live with Shekhar and Shaila without too much trouble. As the violence continues in the city, their relationship continues to improve as they realise the extremism and intolerance doesn’t reflect either of their own beliefs.

Some of the most powerful scenes here show Shekhar interviewing the religious and political leaders and asking them when the riots will stop, but no-one seems able or even willing to try and bring peace. As riots again grip the city and neighbourhoods are set on fire, the family is torn apart once more with Shekhar and Shaila left to tour the hospitals and mortuaries in their search for Kabir and Kamal. Meanwhile the boys find kindness from unlikely places as Bombay slowly begins to return to normal.

The film has graphic scenes of the violence and does not spare the audience any of the horror associated with the riots and the aftermath. The scene of bodies in the morgue is particularly bleak, even though Mani Ratnam doesn’t explicitly show grieving families – he doesn’t need to. The anguish and despair come through clearly as Shekhar staggers through room after room of bodies, men women and children, Hindu and Muslim, all mixed together, in a terrible reminder that this is the real cost of the riots. Although some of the scenes here do feel rather contrived, such as when Shekhar confronts two of his friends who are fighting on opposite sides, many more appear authentic, painting a picture of neighbour against neighbour with the main casualties being the innocent bystanders. When the police enter the picture (including Prakash Raj as Inspector Kumar) the level of violence seems to jump yet again, and the images of Kabir and Kamal hiding from the authorities are powerful reminders of the political aspects to these events.

The romance is beautifully told with plenty of symbolism in the images of sheets of rain separating Shekhar from his family, and Shaila losing her abaya as she runs towards Shekhar and freedom. The second half is brutally realistic but still has beautiful scenes of the family together and the developing relationship between Narayanan and Basheer. Rajiv Menon’s cinematography is excellent and A.R. Rahman’s soundtrack perfectly complements the visuals while Raju Sundaram and Prabhu Deva ensure that the dance numbers are equally spectacular.

Arvind Swami is excellent in a role that requires him to switch from a love-struck young man to a desperate and terrified one as he searches the streets for his children. His emotions are clear and easy to read, particularly in the second half when he begins to realise the political manipulations that are behind the riots. His fear and desperation as he searches for his children are frighteningly realistic while his disgust at the politicians, religious leaders and the rioters themselves also comes across well. Manisha Koirala too is wonderful in her role, and brings plenty of emotion to her character at every stage. Although she looks fragile, her character has plenty of determination and a fierce capacity to fight back when necessary. I love her performance here as she conveys so much without words, letting her expression say everything instead. The support cast are all good too, and Nassar and Kitty steal the show whenever they are on screen together. Their initial animosity and then gradual acceptance help to ground the film and stop it becoming too overly emotional as well as providing some mild comedy that also helps to lighten the atmosphere. 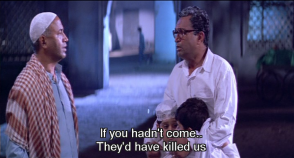 Overall, Bombay is a beautifully made film that takes on both a societal issue and a horrific subject to make strong and compelling political and social statements. Mani Ratnam does hammer home the manipulation message rather forcefully, and the final scenes are a little too simplistic, especially after all the drama that has come before, but despite these few issues, the film still delivers a powerful message that continues to resonate, even all these years later. It’s a disturbing film but that’s what makes it such essential viewing. Highly recommended. 4 ½ stars.