I didn’t read any reviews before I went to see Saaho, but I’d seen comments on social media that were mostly negative. So I wasn’t expecting great things from the film, and perhaps that’s why I enjoyed it much more than I expected. Sure there are plenty of flaws, including a confusing story, poorly developed villains and far too many songs, but I loved the action, all the special effects and especially the imposing presence of Prabhas. Think standard Telegu Mass on VFX steroids, and that’s pretty much what you get with Saaho. Logic has never been high on the agenda for these kinds of films, not when directors can just blow up, beat up or shoot up everything in the hero’s path and writer/director Sujeeth follows he standard formula here. Nonsensical yes, but entertaining – definitely!

Let’s talk about the negative aspects first. The film opens with a confusing array of characters, not helped by long, complicated sentences of subtitles which vanished off the screen too quickly for me to read them. Then, the introduction scene for Prabhas is surprisingly poorly executed. Who is the man he is trying to rescue from a bad situation with a gang of thugs? There is some by-play about a whistling pressure cooker to give Prabhas a set time to carry out the rescue, but then there are no whistles – why set this up and then fail to deliver? And when this character reappears, his part in the finale is so rushed and poorly subtitled that I have no idea what exactly he was supposed to be doing. So, we’re off to a bad start, which is compounded by key events being rushed through and important characters appearing and disappearing without any clear idea of who they are and what role they play in the plot. It’s not helped by the subtitles which sometimes took me some time to work out and even with my bad Telugu I could tell that they missed a lot of information. The list of bad guys grows longer and longer, on top of which their alliances change, there are numerous double crosses and their relationships to each other are poorly described, so after a while the best idea is to stop trying to figure it out and just enjoy all the mayhem! 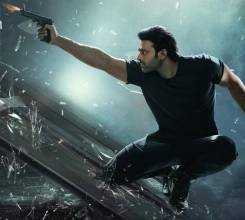 And the mayhem is what works very well here. This is where all the money was spent, and the result is slick and fast paced action with excellent fight scenes and lots of explosions. There are fast cars, motorbikes, even chase scenes with heavily armoured trucks and excavators but perhaps the most ridiculous involve men wearing mechanical flying suits and Prabhas carrying out some do-si-doing with a helicopter. At one point, at the end of a song, for no apparent reason there is a tank that drives over a couple of cars. It’s like they had a few thousands of dollars left and decided that adding a tank would complete the line-up of transport options! Throughout it all Prabhas is a tower of strength and stays true to the Telugu hero ‘code of conduct’ by endeavouring to single handedly take down all his enemies, be impervious to bullets, indestructible regardless of whether there are crashes, explosions or he leaps off a cliff without a parachute (more on that later), and of course still find time to romance the girl, talk tough and always, always look ultra-cool!

After the initial confusion the film settles down with Prabhas as an undercover cop who has been seconded to an investigation team after a series of burglaries in Mumbai. Amritha (Shraddha Kapoor) is the nominal female detective who is continually shunted aside by her boss Shinde (Prakash Belavadi), while tech specialist David (Murali Sharma) and Goswami (Vennela Kishore) round out the team. The police think they spot the thief (Neil Nitin Mukesh) on CCT and the team then devise a super complicated plan to bring him in. This involves convincing him to steal a ‘black box’ which is vital to open a vault full of money and gold in the gangster city of Waaji. 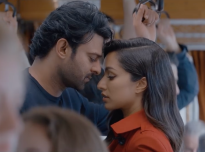 Waaji is a super high-tech city run by the Roy corporation headed by Narantak Roy (Jackie Shroff). After his assassination, Devraj (Chunky Pandey) is poised to take over the cartel when Roy’s previously hidden son, Vishwank (Arun Vijay) appears and thwarts his plans. The various cartel members are each trying to take over the top spot, but key lieutenant Kalki (Mandira Bedi) supports Vishwank, although his position is far from secure and he needs the black box to be able to pay off the various cartel members. The action moves to Waaji in the second half after the black box is stolen and Saaho (Prabhas) becomes involved in the power plays by Devraj and Vishwank.

Most of the Southern Indian actors play their usual kind of roles well here. Tinnu Anand is good as Devraj’s disabled father and Arun Vijay does well as Vishwank despite the dodgy writing while Supreeth and the cast of support thugs are suitably OTT. Mahesh Manjrekar has a reasonable role as one of the cartel members, but Madira Bedi is probably the best realised of these characters and I love her smooth operator approach to playing a gang member. The rest of the Hindi actors are a bit hit and miss. This might be more due to the language problem as they were better when speaking in English. Jackie Shroff is probably the best of the lot, possibly because he has only has a small role to play and little dialogue. Neil Nitin Mukesh seems uncomfortable throughout and Chunky Pandey desperately overacts every time he appears. To be fair, Shraddha Kapoor is pretty good in a more action-based role and she does have reasonable chemistry with Prabhas in their romance scenes. The problem is the songs, which don’t fit well into the narrative and don’t add anything to the story. This is an all action film, and the songs act as speed breakers, taking the audience out of the story. Probably the best is the Jacqueline Fernandez item number, which is just ridiculous enough to fit the plot, with the previously mentioned tank, machine guns, and lots of scantily glad women in a swimming pool.

Sujeeth however is equal opportunity in objectifying his stars, and Prabhas gets to jump off a cliff wearing nothing but ripped jeans, but only after he throws his parachute off the edge first. It’s that kind of film. Shraddha Kapoor actually comes off pretty well in the costume stakes, wearing generally sensible clothes, apart from in the songs. Prabhas looks uber-cool wearing cropped pants and trendy loafers once he gives up the denim and leather look of the first half. 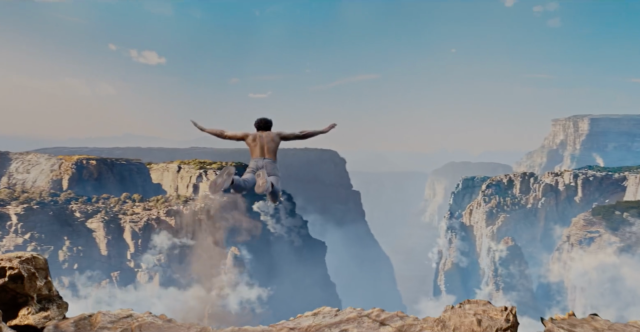 Saaho is a fairly typical Telugu action hero film. The story doesn’t make a lot of sense and the cast of thousands list of characters is confusing, but there are some good ideas in there that would have worked better if they’d been kept simpler. Having lots of special effects doesn’t hide the limitations of the story, but it does make it fun to watch. I saw the Telugu version at a fairly full theatre in Melbourne, and most of the audience seemed to be enjoying the film as much as I was. We did all laugh at scenes that I think were supposed to be dramatic and tense, but there was plenty of applauding and cheering whenever Prabhas got to obliterate (literally!) the bad guys. All up, Saaho is simply entertaining and a fun piece of visual theatre. One for fans of Prabhas, mayhem and OTT mass action.