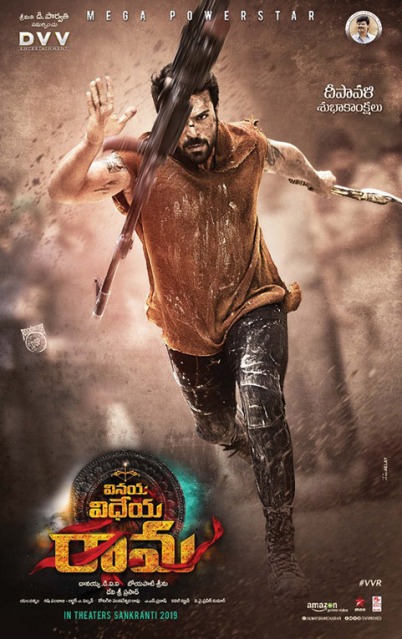 Boyapati Srinu specialises in films that are all action and little plot, but even by his standards Vinaya Vidheya Rama is a nonsensical mess. The film has zero logic and even less of a story than usual, along with a completely muddled-up timeline and ludicrously impossible situations. I don’t expect much logic from mass masala movies but I can appreciate their usually well-choreographed fight scenes, good music and memorable choreography, but even all of these fall significantly short in this overlong, systematic bloodbath of a film. A quick perusal of the plot (such as it is) makes it seem that Vinaya Vidheya Rama might fall into the ‘so-bad-it’s-good’ category, but it misses this too by a mile, and not even the best efforts of Ram Charan can save the film from being anything other than a drearily predictable watch.

The opening scenes are also the best and since they almost make sense the film initially lulls you into a false sense of anticipation. Four orphans living on the railway in Vizag find a baby and on discovering he has been bitten by ants and also apparently has a head injury, they take the infant to a local hospital. Amazingly they’re allowed in, don’t have to wait and receive excellent care and attention from the attending medical staff with the eventual outcome that the doctor (Chalapathi Rao) adopts all five children. The four kids decide to send Rama to school while they raise the money to keep him there, but an early run-in with some child-napping thugs leads to the infant Rama disposing of the gang and vowing to send his brothers to school instead. This sounds ludicrous, but honestly, it’s far from being the most ridiculous idea in the film. 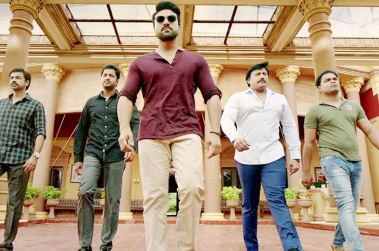 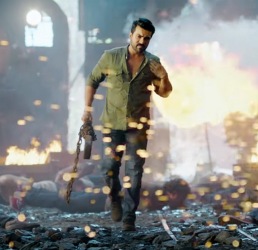 The brothers grow up and get married but creepily all continue to live together with their wives and assorted children. Only one of the brothers is ever called by name, and he’s also the only one who has any gainful employment, which might explain their unusual living arrangements. Bhuvan Kumar (Prasanth) is an election officer which brings him into contact with a warlord living in Bihar who objects to the government elections in his area. This necessitates the usual argy-bargy between the government officials, supporting police, local townsfolk and the generic thugs employed by Raja Bhai Munna (Vivek Oberoi) with the inevitable outcome that Rama (Ram Charan) has to head up north and save the day. 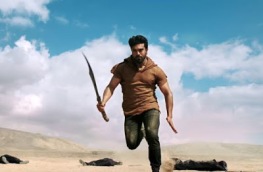 There is also a vague romance with Kiara Advani as an arranged marriage candidate. Boyapati Srinu tries to be topical by making her mother (Hema) a violent advocate for feminism but this falls completely flat and is at times actually quite nauseating while her husband (Prudhvi Raj) is portrayed as a hen-pecked loser who somehow stumbled into marriage. It’s not funny, it’s not even necessary for the story and the whole entirely pointless romance should have been left on the cutting room floor. 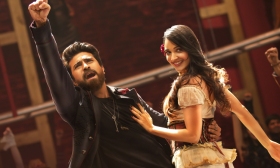 However, the romance is the basis for including the songs – mostly set as fantasy-dream sequence numbers. Although Charan dances up a storm, the female backing dancers are often out of time and incredibly stiff, which significantly detracts from his performance and makes these songs just as difficult to watch as the preposterous story. Devi Sri Prasad doesn’t break any new ground with the music either and the songs are mostly generic dance numbers that don’t leave much of an impression.

It doesn’t get any better. The story timeline keeps switching between pre- and post- Bhuvan going to Bihar and it’s frequently unclear just exactly when any particular scene is taking place. After a while I just ceased to care. Things get even more bizarre when Rama somehow manages to get from an airport in Gujarat to Bihar on top of a speeding train and then on horseback in less time than it takes for Raja Bhai Munna to threaten Rama’s brothers and their wives. That’s all the way across India in minutes standing on the top of a train and using a smartphone app for directions to the location of his brother’s phone. There’s always some suspension of disbelief required for any action movie but it’s a whole new dimension of disbelief that’s required for a Boyapati Srinu film!

Having arrived at his destination, Rama then proceeds to slaughter thugs like they were mosquitoes and claims to kill 300 men before finally being captured and imprisoned in a belt and chain affair that never looks as if it would be effective. There’s no doubt that Rama will win the day, but of course there has to be a lot more speeches and posturing before that happens – interestingly the best posturing comes from Bhuvan Kumar’s wife, Gayatri Devi (Sneha) whose determined defiance is more effective than all of Rama’s intense and overly dramatic speeches.

The fight scenes are brutal, bloody and in true Boyapati Srinu fashion, no object is unable to be used for impaling, dismemberment or general destruction. I have to admit that there are moments when the fight scenes threaten to be entertaining, but then they degenerate back into formulaic action that is dull because it’s been seen many, many times before.

I wanted to like Vinaya Vidheya Rama because a film this silly should be entertaining, but for every fleeting moment that worked, there were hundreds of others that just didn’t. Apart from Rama, none of the characters are anything other than a brief sketch and to add to the tedium, all of Rama’s brothers (Aryan Rajesh, Ravi Varma and Madhunandan) spend the entire film talking about how amazingly wonderful he is. Vivek Oberoi’s villain says and does the usual things along with his army of ineffectual thugs, and while in general Vivek is fine as a bad guy, the character is so loosely drawn that there is never anything juicy enough for him to really get his teeth into.

Despite all the explosions, fights and general mayhem, Vinaya Vidheya Rama is surprisingly unexciting, made even more tedious by the unrelenting vagueness of the story. It’s a shame because there are the odd moments of light – the four young kids are good at the beginning, and the wardrobe department has done a good job styling Charan for the songs. But at the end of the day it’s not enough and even for fans this one is a tough watch.