H. Vinoth’s Sathuranga Vettai is an amusing crime caper that follows the exploits of con-man Gandhi Babu as he persuades a large number of gullible people to part with their cash. Naturally, this does not come without consequences and the later part of the film deals with Gandhi’s redemption and his attempts to break free from his life of crime. This is an impressive début for H. Vinoth and despite a tendency to veer into overly dramatic territory towards the end, the film well worth watching for some great dialogue, good characterisations and Natarajan Subramaniam and Ishaara Nair in the lead roles. 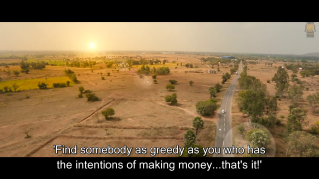 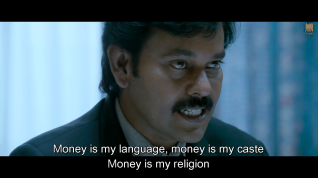 The film is divided into different chapters, each describing a con run by Gandhi Babu (Natarajan Subramaniam) and his merry band of helpers, Guru (Dharani Vasudevan), Kumar and Selvam. The first starts with Gandhi and his gang persuading businessman Chettiyar (Ilavarasu) to buy a rare snake which, they tell him, can be sold on at a much higher price. Of course, the snake is a pig in a poke and is anything but rare, but what is more surprising is how superstitious and gullible Chettiyar is, given that he is supposedly a rich businessman with thriving rental and retail investments. I found it hard to believe that he would really believe that a snake could understand him and lose weight because it was homesick, but it did make for some great comedy in the first few scenes. The film also quickly introduces Gandhi’s simple philosophy – the easiest way to deceive people is to find those who are greedy and want to make a fast buck and in his defence, there does seem to be plenty of greedy people out there.

The second con is better realised and seems rather more plausible. This time Gandhi and his followers set up a mass marketing Ponzi scheme selling miracle water to gullible investors. A young woman, Bhanu (Ishaara Nair) approaches Gandhi for a job as she cannot afford to invest in the scheme and Gandhi immediately sees her potential. Her innocence and flair for persuading others to invest makes Bhanu a valuable asset for the gang, but she has no idea that they are all snake-oil salesmen and that their venture is all a con. Gandhi’s seeming altruism leads Bhanu to start to fall in love with the con-artist but once his true activities are revealed, Bhanu is left to deal with the aftermath as Gandhi and his gang skip town with the money. 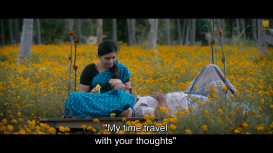 The next con sees Gandhi arrested and jailed for his crimes. While he is tortured by the police, his gang work hard to bribe the various complainants and ensure Gandhi’s release.

Although their efforts pay off, Gandhi is kidnapped by a gang lead by Vallavan (Vallavan) who have been employed by one of the victims of Gandhi’s previous con. Suddenly the fruits of Gandhi’s criminal past are brought home to cause him more problems and the only way he can escape the gang is to work another con for them. After a convoluted series of deals and double deals Gandhi manages to escape and finds Bhanu who still has feelings for him. But the gang is still on the look-out for Gandhi and his idyllic life with Bhanu is shattered once Vallavan and Senthil catch up with the couple and force Gandhi to carry out one last con. 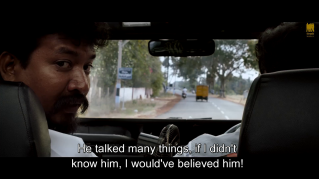 The story is a good blend of action and drama, with enough comedy to keep the proceedings from ever getting too serious. The final scenes are overly melodramatic as Bhanu goes in to labour while gang member Thillagar (Ramachandran Durairaj) is told to kill her as the rest of the gang force Gandhi to dig his own grave. However, the rest of the film isn’t quite so theatrical, and some of the cons are entirely plausible and seem quite realistically portrayed.

Natarajan Subramaniam is excellent in the lead role and seems perfectly cast as the smooth-tongued salesman with the gift of the gab. He dons different disguises and different accents as part of the role, while his ability to appear cold and calculating works well to give the character credibility. It makes his gradual change of heart once he finds Bhanu and slow realisation that there could be another way of life seem more plausible. H. Vinod gives Gandhi a tragic back story which didn’t seem to be totally necessary but again does make his final redemption more likely, given that up to his meeting with Bhanu his general philosophy is that nothing you do is wrong as long as you don’t feel guilty. His early experiences, described here in animation, do at least give Gandhi an emotional response to work with and overcome his otherwise cold persona. One of the best things about Gandhi’s character is that although he is a criminal, he is totally hopeless when it comes to physical violence. As a change for the usual ‘hero’ in this type of role, Gandhi is regularly beaten up and has no capacity to defend himself whatsoever outside a verbal stoush. That seems quite likely for someone who relies on his wits and ability to run and makes Gandhi a more sympathetic character than expected.

Ishaara Nair is also excellent although at times her character does seem a little too good to be true. She has good onscreen chemistry with Natarajan and the two work well together as a couple, even if for much of the time I felt that Bhanu was much too good for him and deserved more. The rest of Gandhi’s gang are good, particularly as sellers of the miraculous magic pearls, although they have limited screen time. Vallavan and his gang have more to do, and Ramachandran in particular is excellent as a gangster with a heart, even though he keeps it well hidden from the rest of the gang.

Overall this is a clever and rather different film that relies on good writing and excellent characterisations to tell an engaging story. The sheer ordinariness of the characters works in their favour and the simple con schemes are plausible enough to keep the story more realistic than most. The music from Seth Rogan mostly fits well into the narrative with the songs featured on Bhanu and Gandhi’s relationship, apart from one early in the film that’s set in a bar that doesn’t work quite as well. K.G. Venkatesh ensures the film looks good too with plenty of beautiful shots of the countryside surrounding Madurai. H. Vinoth has delivered an excellent first film that delivers in terms of both story and characters. 4 stars.