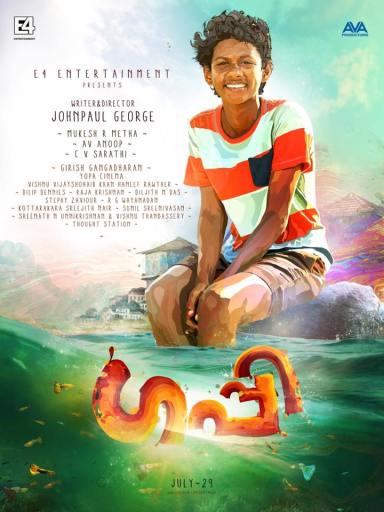 Guppy is the beautifully filmed début from writer/ director Johnpaul George featuring Chethan Lal and Tovino Thomas in the lead roles. The story is set in a small sea-side community in Kerala, and the scenery is stunning with vibrancy of colour in every frame. Cinematographer Girish Gangadharan makes the most of the beautiful location and with excellent music from Vishnu Vijay the film appears magical even before the wonderfully iridescent CGI guppies appear on-screen. The story follows the day-to-day life of Michael (Chethan Lal) aka Guppy and the problems that develop when an engineer comes to the colony, but mainly it’s the story of a young boy, his struggles to help his disabled mother and his relationships with the various people he interacts with on a routine basis.

Michael is known to everyone in his community as Guppy after the small fish he sells to supplement his income. He also works at a tea stall beside the local school where the owner Pappan (Alancier Ley) seems to be something of a father figure for Guppy as his own father is dead. His mother (Rohini) had a stroke after her husband died which left her paralysed from the waist down and Guppy looks after her as well as he can. His major goal is to buy an automated wheelchair for her so that she can get around when he is not there – and his fish sales are a vital part of that plan. The guppies are bought by local government officer Lalichan (Sudheer Karamana) as part of an initiative to help reduce the mosquito population by placing the fish in areas of standing water in the hope that they will devour the mosquito larvae. Despite knowing all about Guppy’s home situation and the plans for his earnings, Lalichan keeps half of the money for himself and only pays Guppy a small amount for each fish – a petty corruption but a common theme in his various deals with pretty much everyone throughout the film. It’s not just Lalichan either. Everyone in the community seems to inflate prices and expect bribes suggesting such corruption is normal and expected, even in such a small and remote village. Most disturbing is the acceptance of the practice as normal – shocking from my perspective that this is perceived as common practice and that no-one is even remotely bothered by it.

The first part of the film paints the picture of Guppy’s life – looking after his mother, working to raise money for her new wheelchair, breeding and selling guppies and hanging out with his friends.

There is a romantic interest in local schoolgirl Aamina (Nandhana) who wears a veil and is kept close to home by her grandfather Upooppa (Sreenivasan) which means all the local boys hang around at every available opportunity, trying to catch a glimpse of her. The other members of the community all have a role to play too and each slice of community life adds depth to the depiction of life in a small seaside village in Kerala. 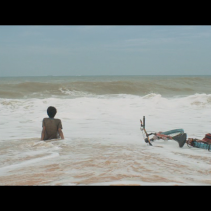 Guppy’s relationship with his mother is beautifully depicted and there are some great moments, such as how he deals with his mother’s snoring, the way she prepares his fish food for him every morning, and the care Guppy takes each day in giving his mother her bath. Chethan Lal is excellent here, his emotions are perfectly displayed and the mix of joy and wonder when he feeds his fish, and excitement as he nears his goal of buying the wheelchair are superb. This is my favourite part of the film as each interaction gradually weaves the pattern of Guppy’s life, and although there are difficulties, there are also moments of happiness and camaraderie with his mother and friends. 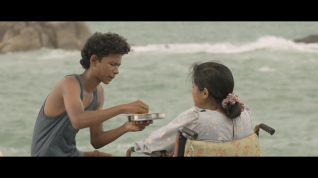 Guppy is well liked in the community. His initiative in breeding the guppies is admired and his devotion to his mother is also appreciated by everyone who knows him, so it’s a shock when newly arrived engineer Thejus Varky seems to immediately take a dislike to Guppy. The engineer has been brought to the village by aspiring politician Onachan (Noby Marcose) and village officer Krishnan (Dileesh Pothan) to build a bridge over the railway but he doesn’t appear in time for the grand celebration prepared for his arrival. Which is a pity since it is rather special! Who could resist Michael Jackson, Amitabh Bachchan and Rajinikanth singing a Christmas song together?

Thejus is an odd character who immediately stands out from the rest of the village due to his motorcycle, his unusual dress sense and his bushy beard. Although Tovino Thomas is excellent in his portrayal of an egotistical and rather arrogant engineer, the character of Thejus doesn’t seem totally plausible – even after his full story is revealed later in the film. Thejus can be charming, as when he meets with his friend Krishnan or in his dealings with his landlord in the village, but all too often he is haughty and appears to look down on the villagers he has come to help. He is easily frustrated by the railway crossing supervisor Upoppa and rudely snubs his offers of tea and a place to sit, while his vendetta against Guppy is strangely childish and immature. Guppy’s reaction is a little more believable, given that an adolescent may be expected to act in an occasionally irrational manner, but this part of the film seems rather more contrived and filmy. However, the tension between the two is well-developed and despite a few unrealistic twists, the conflict between Thejus and Guppy becomes compelling.

What works well in the film is the story of Guppy and his mother. Guppy’s struggles to raise enough money for a wheelchair are realistically dealt with. I love that he first sees a fully automated wheelchair when watching the film Bangalore Days – up until that point he has no idea that such things existed. The love between Guppy and his mother is beautifully depicted and blends seamlessly into the general warmth of the whole community. The conflict between Guppy and the engineer is less successful but there are still some excellent scenes, particularly between Thejus Varky and Chinappa (Poojappura Ravi), the older man who runs the guest house where he has set up his tent, and his interactions with both Onachan and Krishnan. All the actors are good in their roles and their performances ensure that the occasionally convoluted storyline doesn’t get too bogged down with all the detail.

The excellent cinematography is another reason to watch the film. Even though the CGI fish are obviously not real, they are still wonderful to look at, and Johnpaul George weaves guppies into the story in many ways. The fish appear as painting on the walls, in lightbulbs in Guppy’s house and as decorations on his friend’s vehicle as well as swimming around in the drainage canal behind the school. The whole look of the film is just as colourful – whether it’s the brightly painted village, the stunning seascapes or the vibrant villagers, it all looks beautiful and instantly makes you want to move to a seaside village in Southern India!

What doesn’t work quite so well is the sheer number of characters and some of the extraneous plotlines that don’t really add anything to the main story. Each character seems to have to have their own small story and while some are quite fun, most only serve to divert attention away from Guppy and his story. However it’s hard to quibble too much, since the characters are generally fascinating and it gives even more of an opportunity to take in the beautiful scenery.

This is a lovely little film that takes a different look at adolescence, neatly giving Guppy rural innocence but enough street-smart knowledge to ensure that he can match wits with the likes of an engineer. Well worth watching for Chethan Lal and Tovino Thomas, plus the excellent support cast, and to savour yet more stunning images of Kerala. 4 stars.