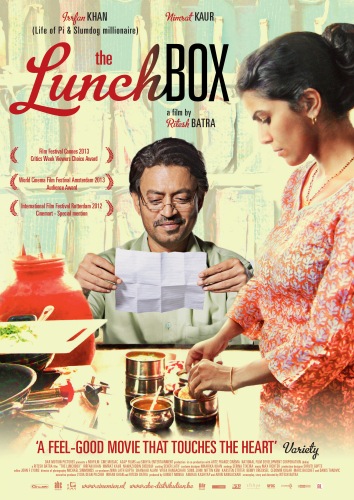 The story of The Lunch Box is charmingly simple – a mistake in the delivery of Ila’s carefully cooked lunch for her husband marks the beginning of a relationship with a curmudgeonly accountant on the cusp of his retirement – yet it opens up the complexities of life in Mumbai and how easy it is to be lonely in a city of millions.  As the story gently unfolds it showcases the famous Mumbai Dabbahwallahs and their phenomenal achievement of delivering thousands of tiffins across the city each day.  Watching the system in action, perhaps the hardest thing to swallow about the film is that a lunchbox repeatedly does go astray, although perhaps there is some redemption in the fact that is consistently it is misdirected to the same person every time. I’m happy to believe such an aberration is possible though, since it does make for an excellent story.

Ila (Nimrat Kaur) is trying to use the old adage that the way to a man’s heart is though his stomach as she struggles to get her workaholic husband (Nakul Vaid) to notice her.  She’s ably assisted in her endeavours by her upstairs neighbour, Mrs Despande (Bharati Achrekar) who supplies spices and recipes along with useful homely advice.  We never see Mrs Despande, but only hear her voice as she shouts down instructions or sends down a basket of supplies, although there is the added bonus of hearing her music – a selection of evergreen Bollywood tunes. As we learn later, her story is also one of isolation, but Mrs Despande seems to have come to terms with her life while her presence seamlessly adds another layer to influence Ila’s own indecision.

Meanwhile, Saajan Fernandez (Irrfan Khan) is just biding his time until retirement.  However in the lead-up to his departure, he’s been saddled with the younger Shaikh (Nawazuddin Siddiqui), a tiresomely happy replacement for his own efficient and silent procedures. As the story unfolds Saajan’s loneliness and Ila’s relative isolation become apparent, despite various encounters each experiences during the day.  Saajan’s nightly smokes on his balcony while he watches a family enjoy their communal dinner are the perfect example of his solitude, while Isla’s constant round of household chores perfectly show the constraints of her life. 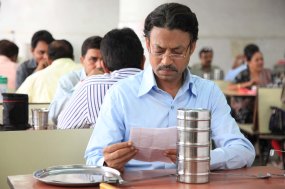 It’s not at all depressing though.  Saajan and Ila exchange notes every day along with the tiffin, and there is plenty of humour in their written exchanges.  The developing relationship between Saajan and the increasingly demanding Shaikh also provides some comedy, but as it turns out there is more to Shaikh’s character than just comedic relief and he has an important role to play.  Needless to say, Saajan’s silence at work is slowly eroded by Ila’s tasty lunches and Shaikh’s puppy-like demeanour as he clamours for attention and follows Saajan around everywhere.   Perhaps more unexpected is Ila’s realisation that she is responsible for her own happiness, beautifully understated in a scene with her mother (Lillete Dubey) after her father’s death, and gradually developed as the story progresses. 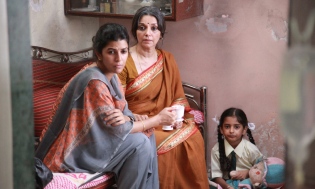 It’s the small touches that make the film so enthralling.  Irrfan Khan says more with his contemplative silences and the quirk of an uplifted eyebrow, than many films manage with an entire screenplay. Although the focus is on ordinary people and their ordinary lives. Ritesh Batra captures some extraordinary moments on film.  The claustrophobia of Mumbai’s crowded trains echoes the self-imposed limitations of Ila’s small kitchen while Saajan’s neatly organised desk speaks volumes about his personality.  As their lives open up to more possibilities, so too their physical surroundings become less constrained and both start to interact more with the world around them. 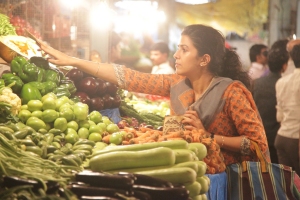 Irrfan Khan and Nimrat Kaur are both fantastic in their respective roles, creating depth and interest in their characters as each slowly develops throughout the film.  They both fit their characters so well that this just wouldn’t have been as compelling viewing without them. However Nawazuddin Siddiqui is just as good, particularly as his story evolves and we learn more about his background, while there is able support from the rest of the cast.  The screenplay, written by début director Ritesh Batra along with Rutvik Oza, is beautiful in its simplicity, with plenty of unexpected turns in the path and a particularly well thought out ending.

Overall it’s a very upbeat story and a breath of fresh air in an industry that is too often obsessed with Hollywood action wannabes and South Indian remakes.  The film has featured in many international film festivals, including Cannes, and I saw it here at the Indian Film Festival in Melbourne. That was a packed showing, perhaps due to Suhasini Maniratnam’s recommendation at her Masterclass and the film received a very positive reception.  The Lunchbox is scheduled for a more widespread release in Australia later this year, and I wholeheartedly recommend watching – you won’t be disappointed!

3 thoughts on “The Lunchbox”