The film opens with a film noir style scene of a woman (Rupa) rushing up to the third floor of a hotel before falling to her death.  A crowd of onlookers gathers, and we see that Rupa is clutching something in her hand – later revealed to be a button from an assailant’s clothing.  Suspicion falls on Shammi Kapoor as Anil, the western style playboy musician with an eye for the ladies and extremely emotive hair.  But the button was not investigated at the time, as otherwise there would have been a speedy resolution, fewer incidental deaths, and no film.

In the next scene, we find that almost a year has passed from the time of Rupa’s death.  The jazz feet of Shammi trip nimbly across the railway station floor, only to meet the elegantly shod feet of Asha Parekh and we have our love interest! Both of these young fashionistas exude a western influenced hip and funky style, with Asha’s tailored salwar kameez leaving Shammi in no doubt about her femininity.

They speak a blend of Hindi and English, quote couplets and are smooth as silk. Asha’s Sunita  is opinionated, feisty and likes her independence and comforts. She can be a brat, as shown in the unfortunate picking-on-the-fat-guy scene on the train. But she also has excellent Filmi Heroine characteristics, fainting with fear at the idea that she had killed the Fat Guy with her umbrella.

Sunita travels to Mussoorie to confront the man she believes ruined her sister, Rupa, thus causing her to commit suicide. Being alert viewers, we know Shammi’s Anil is her man and before long, he knows it too. The interior of the hotel is full of niches, doorways, drapes and balconies and invites skulking, spying and eavesdropping.  Many shots are framed by archways, window apertures and drapery, giving a sense of spying on the hotel occupants. Sunita had planned ahead and brought a women’s hockey team to Mussoorie to ensure Rocky is taught a lesson (perhaps an inspiration for the eve-teasing scene in Chak De?).

Anil aka Rocky aka Sona is the drummer and singer in a hotel band, which is an excellent plot device as it allows for some fabulous RD Burman songs to be centre of attention. It also allows for Helen!  Helen not only minxes her way through showtunes, she has a small but significant role as femme fatale Ruby, the band’s singer and a woman in love with Rocky.

Anil and Sunita play cat-and-mouse culminating in a contrived car expedition which turns into an unplanned overnight stay in the forest. Back at the hotel, we resume the noir-ish atmospherics and the mysterious Cigar Man makes his presence felt, stalking Anil/Rocky/Sona. Ruby makes enigmatic statements; even Rocky’s friends assume there is some guilt regarding Rupa’s suicide. What really happened that night? 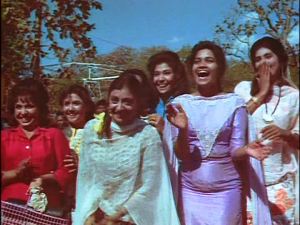 As the romance between the two leads hots up, we are treated to a series of flashbacks which go some way to explaining the sequence of events leading to Rupa’s death, and leave us with an impressive array of possible suspects and motives.  To further murk the waters, Anil tries to confess to Sunita that he is Rocky, but due to yet more intrigue she only discovers this as she watches him sing his heart out to her.  Sunita rejects Anil/Rocky with true Filmi Heroine style in front of an appreciative audience – score 1 for team Helen!

The Enigmatic Cigar Man turns out to be a police  inspector (Iftekhar!) and we have another flashback episode explaining Rupa’s death – after which Shammi decides maybe he does know more than he thinks he knows. Yes, only in films. Shammi confronts Helen about her lies and there is a scuffle during which an unseen assailant fires a gun and Helen expires gracefully, with beautiful eyeliner. Her dying declaration is that her only crime was to love Rocky and so that obstacle to his marrying Sunita is neatly sidestepped.  Shammi starts acting like a Hammer Horror Heroine and does exactly as he is told by a strange woman who breaks into his room. Some minutes of sweaty overacting later, Shammi catches up with the audience, confronts the real killer and gets to the truth. The bad guys get their comeuppance, the heroic couple get a first class train ticket home and everyone is happy. Even the Fat Guy. 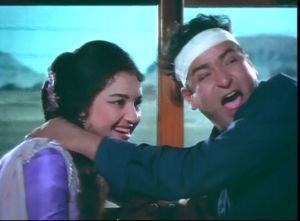 There are some beautiful moments in the editing – for example when Sunita realises that the man she has given her heart to is also the man she thinks is responsible for her sister’s death, there is a beautiful shot of wax running down the candle, followed by the tears running down Sunita’s face. Or later, when the police inspector shows Anil the flashy button that was found in Rupa’s hand after her death, the next shot is of more fancy buttons, this time on the jacket of Ramesh, her fiancée (played by Prem Chopra – who among us would not suspect him of being the bad guy?).

The film relies on flashbacks to fill in the missing facts, and this does tend to slow the pace down. The Hitchcock vibe dissipates somewhat under the weight of the ludicrous decision making by Shammi and Sunita at various points, but the mystery aspect remains well integrated into the romance in this interesting  screenplay by Nasir Hussain.  The direction by Vijay Anand does create an undertone of unease and mistrust throughout the film. The visuals are western, stylish, slick and glossy, and convey the sense of intrigue brewing in the hotel.  The music by RD Burman is fabulous, and Asha Bosle and Mohammad Rafi are in fine voice.

We had trouble selecting screencaps for this post, so here is an assortment just for your viewing pleasure:

Heather says: I watched this film initially for Shammi and Helen, being a fan of both.  It was lovely to see Helen in a more realised role, and she was just fabulous as the jealous Ruby.  Shammi is his wonderful self with plenty of dancing, that too with Helen, to keep me happy.  The music is one of the best points of this film, and the dance numbers are infectious and energetic with enough rock n roll to keep Shammi’s hair choreographer busy!  I defy anyone to remain still while watching Oh Haseena or Aaja Aaja.  I love the contrast in the editing, with the suspense built up using shots through windows and in gloomy passageways in the hotel, in contrast to the romance scenes played out in the ballroom, or outside in the open air. The dance sets in the ballroom are totally over the top, and my optometrist self gets very excited at the use of a gigantic eye as a prop !  The fashions are another high point and I tend to find that I don’t really care who killed Rupa or why, as the whole film is such a visual feast – and it fact it does seem as if the rest of the cast is of the same opinion by the end.  I deduct stars for the ridiculous plot contrivances in the latter part of the film, but add on another half for Helen, Asha and Shammi who really make this movie.   After which complicated mathematics I give this movie 4 stars.

Temple says: I think Teesri Manzil is an excellent example of how style can triumph over substance…to an extent. This isn’t my favourite Shammi film by a long chalk, but it has so much flair that the really stupid plot contrivances cease to be too annoying. I love the soundtrack, and the song picturisations are fabulous. This is the film that convinced us all that Shammi’s hair had it’s own choreographer! The added joy of seeing Helen in a pivotal character role almost compensates for the ridiculous under-use of Laxmi Chhaya. I will never understand the decision to cast her in this film, with this gorgeous soundtrack and NOT HAVE HER DANCE!!!!! I love the visual devices in Teesri Manzil – the cutout arches and windows framing shots, the lurking behind doors and draperies and the amazing fashions.  The real focus in this film remains the romance between Sunita and Rocky which Asha Parekh and Shammi Kapoor invested with such lively intensity and feeling. The whodunnit aspect of who killed poor Rupa is diluted by the time we get to all the frantic action in the last 30 minutes or so and the sense of unease and fear that gave this a noir flavour just fizzled out. The only reason anyone seems to be interested in Rupa is that her death is a major obstacle to True Love for Sunita and Rocky. It leaves me feeling quite dissatisfied with the denouement as the romance overwhelms the mystery and pushes the film into silly territory. For me, this rates 3 1/2 stars.