Srikanth Addala’s Brahmotsavam is a real mishmash of a film, where random family scene follows random family scene with the emphasis on feel-good values and upbeat emotions rather than anything inconvenient like a storyline. This is one film where the subtitles didn’t seem to help at all and much of the dialogue made absolutely no sense, but a few other audience members explained that not only were the subtitles inaccurate, but that the script was fairly random too and they were just as confused. It doesn’t help that most of the characters don’t have actual names but are called brother, brother-in-law or sister-in-law (and there are a lot of them), making Brahmotsavam less of a celebration and more of a memory test. Mahesh is always watchable and the strong cast are all charismatic, but with nothing much actually happening over more than two and a half hours, Brahmotsavam is sadly uninspiring. 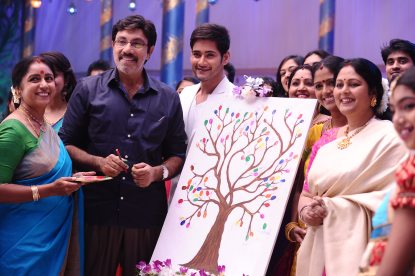 The film starts with a family celebration, which I think was a wedding but could have been almost anything – maybe just breakfast – given the families propensity for breaking into song and dance at any moment.  Whatever the occasion, Sathyaraj likes to ensure that the whole family celebrate it together – that’s all his brothers, their wives, children and his brother-in-law Rao Ramesh. Everyone is sickeningly happy all the time except for Rao Ramesh who suffers from intense (but understandable) familiyitis and resents Sathyaraj’s success with the paint factory he runs. Naturally everyone in the family works at the paint factory when they’re not singing and dancing around the family home, and they’re all deliriously happy to be working there too. It’s actually a little odd to see Mahesh in such ultra-happy family mode for most of the film, but when he sheds the happy and has to show a range of emotions he really is excellent. More of this would have made for a better and more enjoyable film. 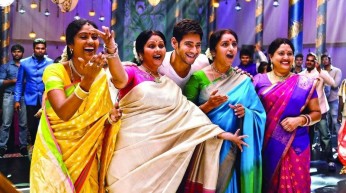 Just to add to his individuality a small animated figure appears to speak to Rao Ramesh any time he is particularly exasperated with his brother-in-law. Since most of the time this imaginary figure berates him for his lack of appreciation for Sathyaraj and the family gatherings this has the effect of making Rao Ramesh even more miserable and less willing to participate. After the first 15minutes I was totally on Rao Ramesh’s side and could completely understand how the continual en masse family gatherings could very easily make anyone want to run screaming for the hills as fast as possible. Rao Ramesh is much more tolerant however and manages to last almost until the second half before he snaps and leaves the family group. 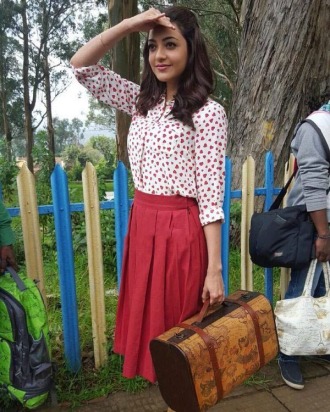 As part of the celebrations, Kajal arrives from Australia for a few months and her father decides it would an excellent idea if she stayed with Sathyaraj and his family rather than spend the time with her own relatives. She’s gorgeous and confident, and Mahesh is smitten the moment he sets eyes on her. However, since she lives in Australia where the accepted practice if you like someone is to tell them you’re interested, Kajal is rather taken aback by someone staring relentlessly at her at every available opportunity without speaking. Living in the same house makes it ridiculously easy for Mahesh to stalk Kajal without appearing to do so but after a few uncomfortable moments Kajal seems intrigued by her silent admirer. The romance progresses as expected but despite Mahesh and Kajal seeming to get on well together, Kajal decides that she wants more from life than to be the wife of a paint manufacturer and decides to move on. She has ambition and is prepared to sacrifice what’s basically a holiday romance for her in order to ensure her dreams come true. I like this assertiveness in her character and Kajal is appropriately confident in the role, while still remaining respectful to the family and her father. It’s a good performance and I like this more mature and sensible Kajal.

Luckily for Mahesh, Samantha turns up in slightly manic friendly overdrive mode and the pair set off pair set off around India in the search for Mahesh’s roots. One of the first family members he meets is the hapless Vennela Kishore and the couple decide to drag him along with them on their road trip. It seems strangely unnecessary but at least Vennela Kishore and Samantha speak to each other which does help to make sense of the second half. Samantha is just a little too zany to be convincing but her energy does help lift the second half. The problem here is a lack of definition for her role and a fluffy backstory that does little to establish her character. 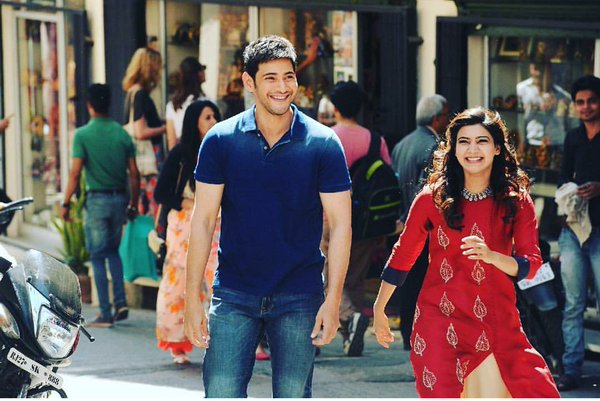 The biggest issue with Brahmotsavam is the addition of too many random scenes which are only peripherally connected to the main ‘plot’ (such as it is) and don’t serve any purpose. For example, at one point Mahesh and his parents are talking by video connection to his sister in the UK. His mum is showing off various sarees while Mahesh teases his sister and the talk finally comes round to how much they miss her and wish she was there. Big family moment – lots of tears, virtual hugs and emotion. And then that’s it – she’s never mentioned again. So much of the film starts with an apparent purpose and then fizzles out without ever going anywhere, making it difficult to work out what (if anything) is relevant.

The first half is also very song heavy with most of the songs coming one after another with little reprieve, including one where Mahesh and his backing dancers frantically try to get insects out of their clothes. That is definitely one of the high points and got the most cheers from the fans in the audience, but possibly not for the choreography. The second half settles down to a standard road trip and there are fewer songs which makes this part of the film flow more smoothly. It’s still a series of random encounters, but at least that does fit in more with the idea of a journey to find yourself while Samantha keeps everything moving along nicely.

There are a few positives to the film. The songs by Mickey J Meyer are good if oddly placed, and Gopi Sundar’s background music is generally effective and not too intrusive. The film looks beautiful and R Rathnavelu’s cinematography captures the warmth of the family home and the stunning landscapes as Mahesh and Samantha travel around India. All the main leads are fine, if somewhat incomprehensible for much of the film, and Mahesh certainly delivers in terms of emotion but the star of the show is undoubtedly Rao Ramesh with his grumpy and often bewildered demeanour. However, the lack of a comprehensible storyline and the random pointlessness of many scenes means that Brahmotsavam is probably best enjoyed on DVD where it’s possible to skip the vague dialogue, watch the songs and admire the beautiful scenery without worrying about the deficiencies in the story.