Thiagarajan Kumararaja’s Super Deluxe is a significant step up from his previous film Aaranya Kaandam, aided by a sumptuous colour palette from P.S. Vinod and Nirav Shah, and the presence of a number of top actors from the South. Included are the likes of Vijay Sethupathi, Samantha, Fahadh Faasil, Ramya Krishnan and Mysskin but the newcomers are just as good and hold their own against the established stars. It’s an interesting story too, although after a good start the middle section does wander and become rather self-indulgent before ending with a stronger finale. It’s still a compelling watch, not just to discover what happens in the various threads, but also to spot influences, note the repeated motif’s and ultimately try to figure out just what Thiagarajan Kumararaja is trying to say. Super Deluxe isn’t for the faint-hearted – the language is strong and there are a number of confronting themes, but the juxtaposition of topical issues and out-and-out fantasy is intriguing even with a close to 3 hour run time. 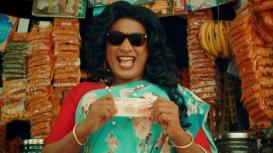 The film consists of a number of different threads which don’t interconnect as such, but instead superficially intersect and occasionally influence each other. The first involves a cheating wife Vaembu (Samantha) and what happens when her husband Mugilan (Fahadh Faasil) discovers her infidelity when her lover has the bad taste to die during their lovemaking session. Next there are a group of schoolboys who arrange an elaborate plan to bunk school and watch porn movies. Their problems start when one of the four recognises his mother Leela (Ramya Krishnan) in the movie and the ripples from his subsequent actions have far-ranging consequences. Part of this sparks an existential crisis for Leela’s husband Dhanasekaran (Mysskin) who has become a faith healer after surviving the tsunami by holding on to a statue of Jesus. The other boys end up in trouble when they try to raise the funds to buy a new TV and end up in a truly out of this world experience. And then there is the story of Shilpa (Vijay Sethupathi), a transgender woman trying to reunite with the wife and young son she left behind many years before. It’s a fascinating blend of narratives and some of the stories work better than others. Or perhaps it’s more that some parts of each story are simply brilliant (and brilliantly simple), but then at times Thiagarajan Kumararaja and his co-writers seem to get carried away and try just that little too hard to be edgy and confrontational. 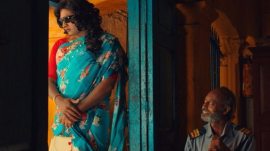 As well as a lot of swearing, there is a lot of sex in this film. Vaembu is first seen in bed with her lover, the teenage boys are obsessed with sex (although that’s not surprising) and there’s a creepy cop (Bagavathi Perumal) whose rapacious tendencies provide an important plot point in two of the stories. One of these is nasty but effective, while the other is too drawn out and staged to be convincing. In those parts where the film is subtle and suggests rather than shows, it is more chillingly real and packs more of a punch compared to the more filmi scenes with Vaembu, Mugilan and SI Berlin. Perhaps it’s a consequence of too many writers (Mysskin, Nalan Kumarasamy, Neelan K. Sekar and Thiagarajan Kumararaja are all credited with the screenplay), but Vaembu and Mugilan’s story is the least successful for me, despite fine performances from the two actors. Their relationship just doesn’t ring true and the characters are an odd mix of modern and traditional that doesn’t seem plausible. However, I appreciate that the fallen woman gets a shot at redemption and isn’t permanently tainted by her infidelity. Something which is also the case with Leela who is proud of her film achievements and sees no reason to disavow her presence in a porn movie. It is refreshingly different even if at times there is a feeling that some of the dialogue has been written by grubby little boys sitting and sniggering at the mere mention of sex. That may be more to do with the subtitles though as I have read a number of comments that some concepts weren’t translated accurately, particularly in respect to Ramya Krishnan’s character. 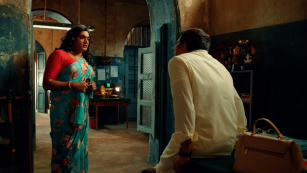 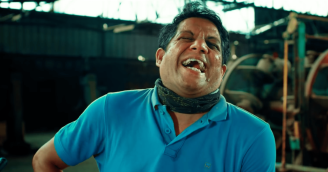 The most successful thread is that of Shilpa, and despite all the issues around a cis male actor playing a trans woman, Vijay Sethupathi is much more here than just a man in a wig. The issues here feel true to life, shocking as they are, as Shilpa tries to navigate a brief visit to her son’s school and faces prejudice and abuse at almost every turn. Ashwanth Ashokkumar is outstanding as her son Rasukutty and although Gayathrie has very little screen-time as the abandoned wife, she makes a strong impact as her facial expressions say so much more than any dialogue could possibly manage. Vijay transforms himself yet again and adds many layers and nuances to his character, alternating between comedy and tragedy but still providing a sense of the underlying weakness that drove Shilpa to abandon her family. 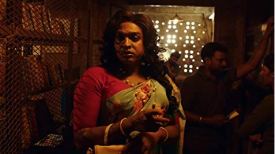 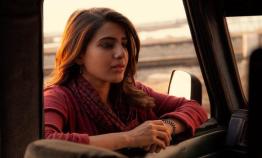 The first half has a lot of well-written comedy but immediately after the interval the film shifts into more serious territory. The pace is also more uneven in the second half, and the labyrinthine feeling of diving down a rabbit hole, so well done in the first half, falters as the frenetic pace slows. There is still a lot going on though, and with the richness of the visuals the film at times becomes almost overwhelming. There are close-ups of ants running up and down a door frame for example – the implication initially seems fairly straight forward, but is it really? There are so many questions and possible explanations for even the simplest shot and it seems that every single part of the set could have a secondary meaning. This is a film that I think does need multiple viewings, and I’m sure that I will see more detail each time.

There are plenty of film references here too – to both Indian and Western films and probably a lot more cultural references that completely passed me by. Despite the variability in the second half this is definitely a film that I’d recommend for the sumptuous visuals, excellent performances and intricate story. Thiagarajan Kumararaja has built a complex world that tries to encompass the natural, unnatural and everything in between. The best part about Super Deluxe is that he so very nearly succeeds.