If Kirathakudu didn’t have Chiru and Suhasini in the leads I am not sure I would have persisted. The first hour or so is very trying indeed. But then I would have missed out on an unexpected reworking of John Carpenter’s 1981 classic, “Escape From New York”. If I see Chiru plus subtitles, the DVD is an automatic purchase so I didn’t read anything about the film before I watched it. There is a voiceover about criminals and the government, but the concept wasn’t well translated in the subtitles. Imagine my delighted confusion when it started to seem somewhat familiar.

Chiranjeevi is Charan, a poor rich boy who just wants his father (Kongara Jaggaiah) to show him some affection. Charan spends his time winning every possible sporting and aeronautical trophy, beating people up, carousing and brooding in his room.

I enjoyed this sporting montage greatly, although it has prompted me to make a statement critical of Chiranjeevi.

His swimming style is splashy and inefficient and he would not have won a race against the under 9s in my swimming club. There – I’ve said it.

Maybe it’s not about winning the race, but about looking stylish on a lilo. 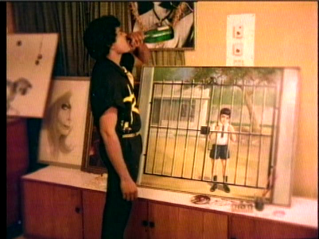 He is a renaissance man, albeit one with questionable taste, a very bad temper and poor impulse control. He drinks heavily, and I think I was supposed to find this appearance a warning – but he looks so good! 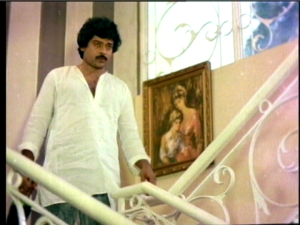 Charan sees a quite unimpressive statue in a local emporium and runs afoul of Swetha (Suhasini) who has purchased the one of a kind piece. His reaction to finding out he can’t have it is extreme.

Swetha is a psychology student, and daughter of the local police chief. She is smart, self assured and is not intimidated by Charan. She is also a raging narcissist from the looks of her house – pictures of her adorn almost every wall.

It is interesting that Swetha is given career aspirations and a brain, and yet the dialogues are often very disparaging of women. Suhasini is such a graceful and intelligent actress that I was pleased to see her in a reasonably involved role. She is drawn to Charan both as an interesting psychological study and because he is Chiru – those eyes!

Charan goes off the rails due to the influence of vampy Hamsa (Silk Smitha). Only Chiru could make Charan watchable as he broods, rants and sooks over why his daddy doesn’t love him and then commits crimes as a cry for attention.  Showing that she is smarter than most people in the film, Swetha finds Charan’s hideout and dobs him in to the police. He kidnaps her in a dramatic getaway and their forced proximity accelerates the already budding love. 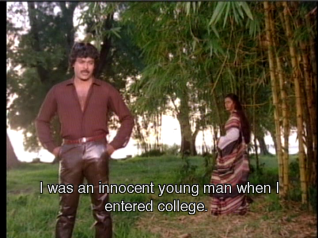 Having been ruined by a tramp, he feels that the love of a good woman will let him live like a decent person. Yes. Surely it would be unreasonable to expect him to take responsibility or just grow up. She then takes on the burden of reforming Charan and settles in for a lifetime of prison visits. I found their song fantasies quite amusing – Swetha was all flowers and pretty colours, while Charan was much more, um, hands on. One thing they did have in common was their terrible taste in art. 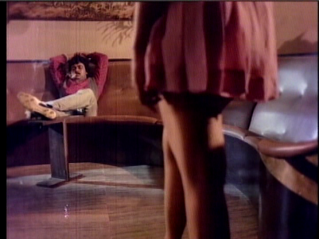 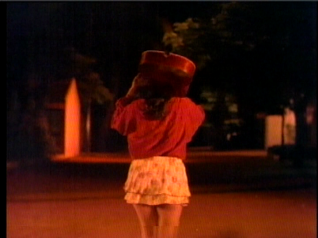 Well, Silk’s arse does most of the work thanks to the constant upskirting camera, but she sneaks the rest of herself into shot occasionally. Hamsa is a Bad Girl who entraps Charan and forces him to turn smuggler (bad) and wear pleather (not so bad). Again, I had to growl a bit at Charan crawling out of her bed the morning after and treating Hamsa like dirt for giving him what he wanted.

Mothers in the film are sacred but women who have sex are evil  – so I wondered briefly about how these idiots thought babies were made. I am not exactly sure why sleeping with Hamsa would be enough to place Charan under Snake’s control, especially given his cavalier attitude to the law and society, but it seems he was besmirched and that was it. The bad girl is usually a thankless role, but Silk gets a few pithy lines and an excellent confrontational cheerleading dance.

The second half of the film took a sharp turn towards awesome. Maybe because Chiru changed into this outfit?

The police need Charan’s help to take on Snake and rescue his dad (and the Top Secret papers) as they could not get into the badlands themselves. When Charan stole a car ferry and chuffed off about 10 seconds ahead of the cops, he managed to hide the ferry within walking distance of a sari shop and judging by the number of Swetha’s outfit changes, remain undetected for days. The man is a genius and I can see why the police appealed to him.

Armed with an array of gadgets and with deadly time release microcapsules implanted in his neck, Charan sets off to save the day. He lands a glider on top of a skyscraper in the crime quadrant, on a mission to rescue his father and protect Indian national security. He had to take a glider as there was no way in by land. In a puzzling development, Swetha and Baby (the cab driver played by Nutan Prasad) decide they have to follow him, and drive in through the front gate in a taxi, sedately avoiding the bombs planted along the route. While the residents look like a left over mob from a B grade post apocalypse horror movie, Swetha is able to glide around in her pristine sari without being spotted. The scenes in this second half are more closely aligned to the original film and the mood is both darker and more absurd. 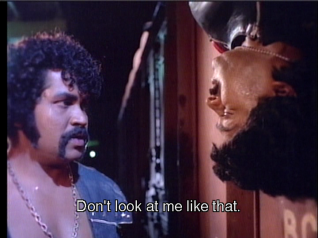 Snake (Kannada Prabhakar) is the kingpin in the sealed off criminal zone. While John Carpenter recreated Manhattan as his prison colony, Snake has to make do with a warehouse complex a few minutes from the downtown area. He has possibly the best DIY lair and henchmen I’ve seen to date, and I enjoyed deciphering the very random graffiti.

Snake is also a psycho killer on a very short fuse.

This guy is quite fascinating.

He plays his role of chief henchman with a blend of odd chicken inspired noises and statue postures, and walks with what I can only describe as a slow-mo mince. While wearing a dress (maybe toga).Who is he? 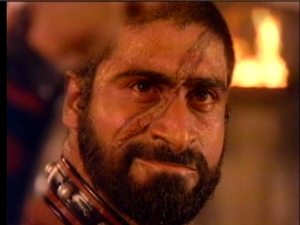 And the guy who would have been played by Bob Christo in a Hindi version of this is back! Last seen in Adavi Donga (the apple peeler Wolverine claws guy) here he is sporting a fake scar and some hideous trousers.

How does it end? Is there any doubt?

It’s a film by A Kodandarami Reddy so I expected crazy, and the second half delivers. I did have to chant the ‘it was made in 1985’ mantra a few times, but even allowing for that I was irritated by some of the dialogue relating to women and their evil powers. Grow up guys! Yandamoori Veerendranath gets a writing credit, but this is a reasonably faithful remake with the addition of loads of sentiment and a message about good family values.

Chiru and Suhasini inject a bit of class into their scenes, and the WTFery dial is set to 11. I’m totally biased due to Chiranjeevi but I’d give this a cautious 3 stars, for the curiosity value of the remake and for the dystopian second half.

Here is a snippet of Silk’s big song number – it is interspersed with the final action sequence so I won’t give away all the surprises!