Thiruvilayadal is a wonderfully embellished pastel confection of a film, supported by a powerful performance from Sivaji Ganesan as Shiva. Thank you to Suja and Ajit for their enthusiastic recommendations. I am also very grateful to the rajshritamil channel on Youtube for making the film available with subtitles. Suja asked how meaningful or interesting a vintage devotional film would be to a non-Hindu? The answer is – very!

I was raised Catholic which, as a friend said recently, is the glitzy end of Christianity. Catholicism incorporates numerous saints, some having their own specialities or areas of influence so the faithful can pray to the one best placed for their situation. They are identifiable by different visual elements and props, often referencing a gruesome means of death if the saint had been martyred. So the colour, pageantry, stylised imagery and iconography of a devotional film are familiar elements for me even though the philosophy and faith are different. One of the biggest differences is something I remarked on after watching Mayabazar. The relationship with God as depicted seems a lot more direct and personal than I am used to. And Shiva is not immune from displaying vanity and caprice as well as humour and tolerance, so I found it a more human interpretation of God.

I suspect more than one team was responsible for the subtitles. Why? Lord Shiva speaks like this occasionally:

While fisherfolk in a rustic village complain thus: 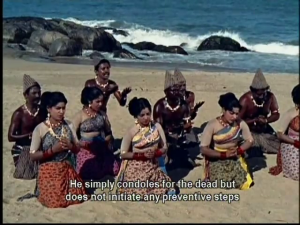 Anyway, the story begins as a resplendent Shiva (Sivaji Ganesan) receives the praise of his devotees, including his wife Parvati (Savitri), which promotes that groovy mood.

Even divine families have their squabbles and a contest between Ganesh and Murugan ends when Ganesh uses his erudition to define the question and win the prize. Murugan is incensed by losing to his sibling and leaves home. Parvati tries to persuade Murugan to return, and explains that it is Shiva’s way to test his devotees. 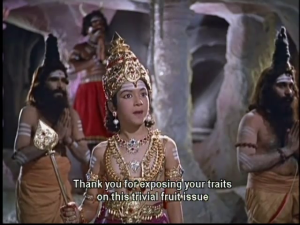 She narrates several stories of Shiva’s ‘games’ to persuade her son that there was no insult intended. The stories are very entertaining and the format allows different aspects of Shiva to be explored in array of visually delightful settings. Again, the theme of God testing the faith of an individual is a familiar one to me, but the style and methodology do differ.

Shiva tests the knowledge (and ego) of a renowned scholar and teases a poor poet. Both get their rewards, but for Shiva the reward seems to be the fun of the game. 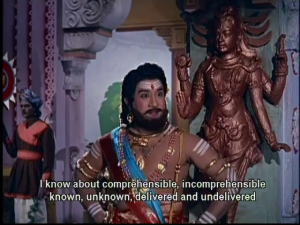 And for the viewer, we get an answer to the vexing question ‘Does a woman’s hair possess a natural perfume?’ Muthuraman and Devika are lovely as the King and his glamorous queen, and their ornate palace is stunning.

Sivaji Ganesan revels in the role, exuding a majesty and playfulness that makes him compelling. He is not what I would call handsome but he is absolutely magnetic. His larger than life style is perfect for Shiva. I love this song, performed by Shiva posing as a firewood vendor. An arrogant musician challenges the Tamil court to best him, and the kingdom is at stake. Shiva sets up outside the musician’s residence and psychs him out before the contest by singing a song so perfect it stops the birds in the air and the waves in the ocean. Even if you don’t love the music as much as I did, watch this clip for Shiva’s exuberance and joy in creation and art, and his pleasure in being really annoying.

Savitri is regal and composed as Parvati. She has endured Shiva’s whims for aeons. She is his equal in temper, but he wields his destructive power without fear of consequences where she is more restrained. Once, after momentarily diverting her attention from her husband to her son, she was punished by being born in a fishing village with no memory of her divine nature. I think that was a harsh reward for good parenting. Parvati showed herself to be a leader in a human incarnation while in the village. I also enjoyed seeing Manorama as one of her girlfriends.

Of course Shiva wasn’t going to let anyone else win his wife in the ‘he who is bravest’ competition, so he appeared as a mysterious heroic fisherman. 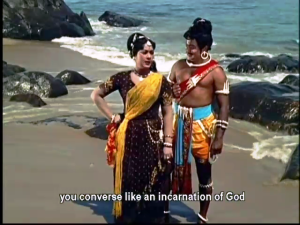 Their flirting was cheesy but lots of fun. And this episode includes one of my favourite filmi things. A shark fight! Admittedly it is more like a rubber whale with dentures in some shots, but look upon the mighty beast and despair! 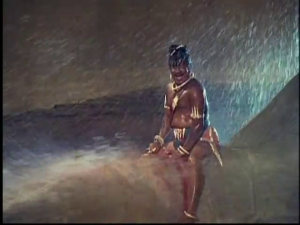 Shiva defeated the shark, won the girl and kindly restored her to her former glory.

The comedy is character driven and fits into the main narrative. Nagesh plays a poor poet who becomes a pawn in Shiva’s game. His mix of rapacity and naivete is funny without being too much. Shiva’s answers to questions by mortals are often a witty partial truth or play on words. It’s a sprightly and engaging film. 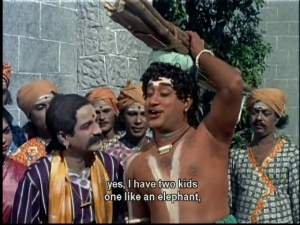 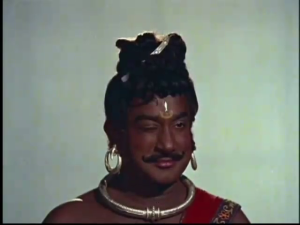 The subtitles are generally very good but I did have some questions about the translations. The balance of Shiva and Shakti is the subject of one story, with neither being able to exist without the other – the balance of opposing forces. After a squabble over her father Shiva uses his power as the destroyer and Parvati/Shakti’s lifeforce is vanquished. (The dance of destruction is dramatic but not terribly accomplished.) 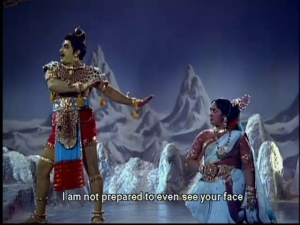 The senior gods intervene and remind Shiva that without her the world becomes barren and dark and he relents and restores her. There are a couple of dialogue exchanges about how all women must submit to their husbands that seem at odds with the theological position. I wonder if it was translation that chose ‘submit’ when the actual word was more nuanced, or if it reflects other beliefs. This image seems to support a balance rather than the dominance of one aspect suggested by the script. 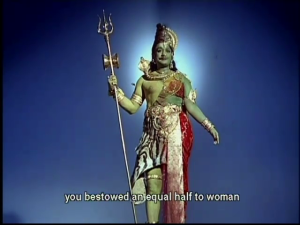 There is a strong theme of the purity and beauty of Tamil language and culture and Shiva rewards those who love and protect the tongue. Many key supporting characters are Tamil scholars and are accorded great respect and some indulgence by the gods. Since this is from the 60s maybe the positioning of Tamil culture and language as superior and preferred by the gods was a reflection of the Dravidian movement or other factors? I’m sure someone will tell me.

K.V Mahadevan’s music is not only enjoyable but is integral to the stories. The art design is just wonderful. There is such a wealth of beautiful detail, right down to treasures like the fish themed musical instruments and a fabulous bird shower.

The central performers are brilliant, the stories are engaging, and it is a pleasure to see and listen to. There is so much to enjoy in Thiruvilayadal whether you watch it as a colourful entertainment or with a more philosophical analysis. 5 stars!

Heather says: This is a simply a beautiful film. The colours are amazingly bright and it is incredibly iridescent and sparkly throughout. From the opening song and dance until the very end it is captivating with beautiful music and stunning performances. I think this was the first film I saw with Sivaji Genesan and he seems to be the perfect person to play Lord Shiva. He has such charm and brings so much character into the role. I particularly love his Tandava dance after the death of Sakthi where his facial expressions are superb and I love that he dances with his eyes. My dance teacher keeps telling me this is how to dance properly, and this is the perfect example of how much it brings to the performance. Even if as temple points out he’s not technically perfect otherwise. My favourite story is the one about the musician Hemanathan and the song above where there are multiple Lord Shiva’s playing different musical instruments is brilliantly done. Considering the film was made in the sixties and the special effects were presumably rather limited, it’s all put together very well and creates a magical effect every time I see it. And I totally agree with Temple’s comments about the subtitles – the ‘I feel groovy’ perhaps is showing the influence of the sixties, but some of the rest I have no explanation for at all.

There is at times so much detail in the film that at times it distracts a little from the main action for me. The backing musicians during Hemanathan’s performance have amazing facial expressions and really get into the music. I tend to end up watching them and the various other servants and hangers-on rather than concentrating on the lead characters. But then again, so much of the detail is charming. There is the fish tika on Kayarkani’s forehead as the fisherman’s daughter, the wonderful peacock chariot that carries Hemanathan to the Pandian King and Shiva’s third eye that blinks just to name a few.

Thiruvilaiyadal is an absolute classic, and as a friend said when we were discussing the film, it’s one to watch again and again. 5 stars.