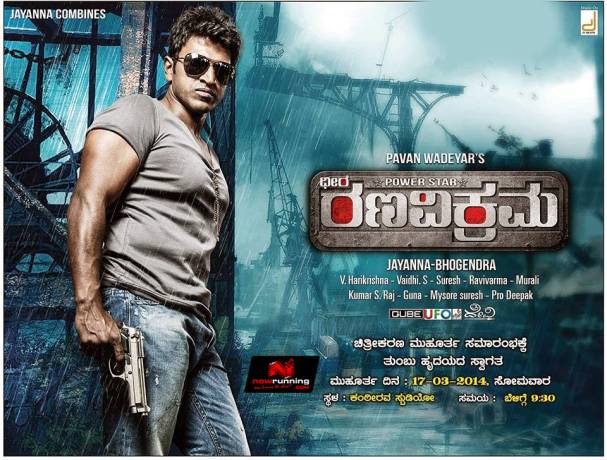 Time for another adventure without subtitles; this time the Puneeth Rajkumar starrer Rana Vikrama that released earlier this year in India and showed this weekend in Melbourne. Written and directed by Pavan Wadeyar, it’s an action movie that follows a fairly predictable path but is kept moving along by the Power Star’s charismatic presence and some good action sequences. Throw in some better than average songs, a dash of comedy, and Rana Vikrama is a more entertaining watch than the opening scenes would suggest.

The story starts with a rather over the top British Officer in the last days of the British Raj. As expected, the Viceroy (Vikram Singh) is obnoxious, controlling, vindictive and just plain evil, although since Vikram Singh overacts and has been inexplicably dubbed by someone with an East European accent he ends up more comical than villainous. Unfortunately he’s not the only victim of the poor dubbing as a number of later scenes supposedly set in London feature reporters and lackeys also badly dubbed into grammatically incorrect and oddly accented English. Skipping over these technical issues, Vikram Singh chews the scenery for a while and eventually attempts to kill upstart villager Vikrama (Puneeth Rajkumar). Naturally he is no match for the tough local who wins the day despite being beaten, weighed down by chains and shot. Twice. Take note Hollywood – that’s how hard it is to kill a real hero!

The film then flashes forward to the present day where Vikram (Puneeth Singh again) is an aspiring police officer. Despite his obvious physical fitness, he is rejected by the enrolment officer time and time again however Vikram is determined to succeed, somewhat against the wishes of his fiancée Paaru (Adah Sharma) who would prefer him to stay with her. Vikram is thrown a lifeline by the Home Minister (Girish Karnad) who appoints him as a police trainee and sends him off to investigate a missing reporter somewhere in the border between Karnataka and Maharashtra. After a few hiccups Vikram finds the spot where workers in chains are toiling away in what appears to be an open cast mine, and makes short shrift of the numerous thugs and villains overseeing the project in classic filmi hero ishstyle. 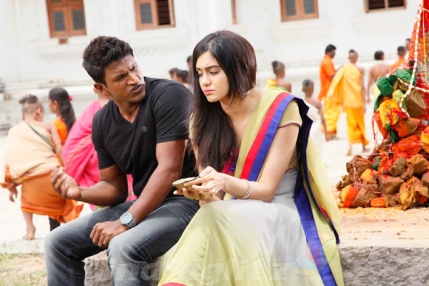 The village has been keep secret for many years due to the nefarious dealings of none other than the British Viceroy’s descendant and the richest man in Britain, Jonathan (Vikram Singh again). He’s just as prone to overacting as his grandfather but with less reason, since he’s supposed to be a successful if rather unscrupulous businessman. However once Jonathan discovers that his secret has been discovered he jets in to India and prepares to get rid of Vikram once and for all.

Before we can get to the ultimate showdown however, there is a flashback sequence which explains the opening scene and also exactly why Jonathan’s family wants the land. Vikrama is married to Gowri (Anjali) for this sequence and the couple share good chemistry making this a better pairing than Puneeth Rajkumar and Adah Sharma in the present day. Anjali also gets to swing a sword and her feisty nature fits well into the storyline making her a more memorable and likeable character. I love this song featuring Gowri and Vikrama, which has the added benefit of a gigantic drum as a stage for Vikram’s dance moves. There is always something very special about oversized musical instruments in a dance number!

Generally the songs from V. Harikrishna are catchy and the choreography and picturisations are effective with some excellent costumes and imaginative settings. The songs also fit well into the narrative, something which is often more hit and miss in an action film, but they do work well here. If only such attention to detail had carried over into the dubbing and present day Anjali’s make-up to turn her into Vikram’s grandmother. This basically doesn’t work, and casting an older actress instead would have been a better option given that Gowri has little to do in these sequences other than look old and frail (which she doesn’t) and point dramatically at significant moments in the story. There is also a heavy reliance on clips of TV news reports which dulls the impact of some of the more dramatic scenes, although overall S. Vaidhy’s cinematography is impressive. 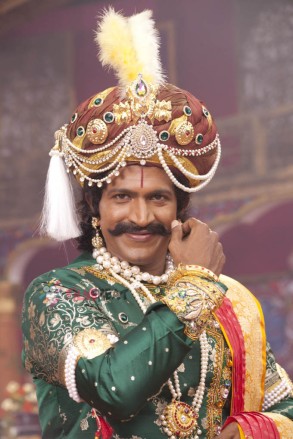 Although the film doesn’t cover any new ground and the heroic antics are far-fetched and fairly improbable, Rana Vikrama is still fun to watch. The action sequences from Ravi Verma are well thought out and the Power Star perfectly fits the role of a rough and tough police officer. It’s Puneeth Rajkumar’s film all the way and he does an excellent job of holding the story together despite the caricature of a villain and the rather OTT final sequence. I would have liked a little more care with some of the more technical aspects, but it’s still an entertaining film and one definitely worth catching on the big screen if you can.