Ram Kumar’s 2018 film Ratsasan is a chillingly dark thriller that has plenty of twists and turns, and a good selection of red herrings added to the mix. Vishnu Vishal is compelling as a police officer trying to track down a particularly vicious serial killer and San Lokesh’s editing ensures the suspense level is high throughout. The only let down is the end, which feels overly indulgent after the tight screenplay up to that point, but it’s a minor issue in an otherwise excellent film that is an edge-of-the-seat watch.

The film starts with one of those twists as what seems to be a horror film resolves into something else entirely. Arun Kumar (Vishnu Vishal) has dreams of making a film about a psychotic killer but struggles to get any interest from the various producers he approaches. Along with the continual dashing of his hopes, his mother and brother-in-law repeatedly advise him to give up his dreams and join the police force. Their logic being that since Arun’s father was a police officer, Arun would be a shoo-in for the job, which made no sense to me but presumably did to Arun! The continual rejections wear Arun down and he finally succumbs and becomes an SI just as a schoolgirl is abducted. The abduction coincides with the discovery of another body, horribly mutilated, wrapped in plastic and dumped in a concrete pipe. Thanks to his immense knowledge of serial killers from years of cutting out news clippings and obsessing about his film, Arun quickly puts two and two together and deduces that there is a psychopath preying on school girls in the area. However, convincing his superiors is just the first hurdle he has to overcome in his search for the murderer.

The early part of the film is used to establish Arun’s dedication and persistence since even when he starts working as a police officer, he doesn’t let go of his dream. Or perhaps his dream won’t let go of him – Arun tries to throw his script away into the sea, but the waves end up bringing it back to him. I like that he’s shown to be a compassionate but practical man, and that despite being on the side of law and order, he’s willing to break rules when he feels it’s expedient, or to argue his point when his senior officers tell him to shut up and go away. These early scenes paint a clear picture of Arun and set up his behaviour for the rest of the film, allowing Ram Kumar to focus attention on the plot and the action. Yes, the characters often behave predictably, but that’s the whole point and it actually adds to the plausibility of the police investigation. 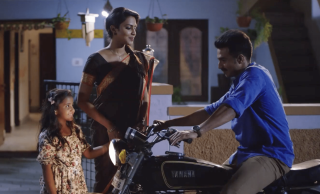 The story moves rapidly between the various abductions, the search for each girl and the final discovery of the bodies while mixing in elements of the investigation.  All of this helps keep the tension high as the audience slowly learns about each new incident along with the investigating team. Ram Kumar also introduces each victim before they are abducted which makes them seem more ‘real’ and ups the suspense level as the police work to find them before they are mutilated and killed.

One well used point of contrast is the day-to-day normality of everything outside of the police case that serves to highlight the tensions within the case even further. Once he joins the police, Arun lives with his school-teacher sister Kokila (Vinodhini Vaidyanathan), her husband Doss (Ramdoss) (who is also a police officer), and their daughter Ammu (Abhirami). All have well written characters and the scenes in their house bring a good family dynamic that keeps the film grounded. There’s even a romance, which is kept nicely low-key to avoid derailing the main story. Viji (Amala Paul) is more than just a love interest though as her job as a teacher brings her into contact with the victims, and she is able to help out with the investigation as a result.

One of the best and most convincing threads is that of a paedophile in the school, well played by Vinod Sagar, with a chilling and shocking conclusion. It’s this mix of good writing, intelligent twists and genuinely surprising shocks that make the film work so well. I did find it quite surprising in a film that’s essentially about a police investigation, that the police don’t come across well at all. There are a lot of beatings, general brutality and forced confessions, while the senior officers seem to be willing to overlook their subordinates’ behaviour simply to have someone in jail for a crime – regardless of whether they are guilty or not. The police even have a secret mortuary used for whenever they need to ‘disappear’ someone, and the officer in charge of the investigation, ACP Lakshmi (Suzane George), is particularly stubborn and short-sighted. I find it hard to believe that anyone could be quite so fixated on their own theories to the point of stupidity, but her incompetence does ensure that naturally Arun will be needed to save the day.

Mostly the film gets it right, but there are perhaps a few too many coincidences, and having Arun as an expert in psychopaths is overdone at times – surely senior police would have heard about famous killers such as Jack the Ripper for instance – but otherwise the plot is well put together and cleverly convoluted. The fast pace, twists and turns keep the momentum going, although the film does slow at the end where the serial killer is unmasked. My main issue though is that the reasoning behind the abductions and mutilations doesn’t quite stand-up at the end. Maybe that’s just my preference for a more true-to-life killer – someone who drifts under the radar and whose neighbours are always shocked by the discovery. However, the reveal and explanation are suitably horrifying and the perpetrator satisfyingly evil with the moment when the last victim realises her predicament really very scary! Ghibran’s background music is effectively used to heighten the tension and P.V. Sankar blends light and shade with the camera as expertly as Ram Kumar does with the screenplay. All the actors perform well in their roles and it’s good to see so many minor characters have more back story and a real presence in the film. I haven’t seen Ram Kumar’s previous film, but if this is anything to go by, he’s definitely a director to watch out for. This is a well written and smartly plotted thriller that’s considerably darker than expected with plenty of suspense. Highly recommended – 4 stars.