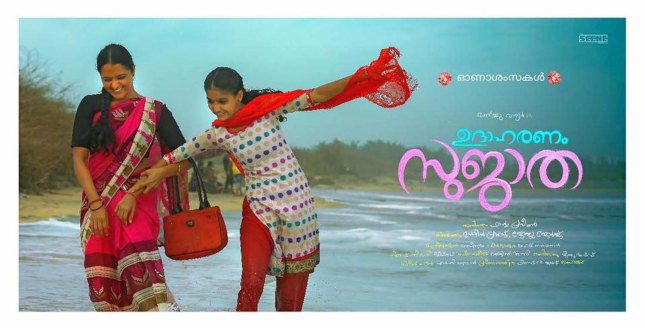 Udaharanam Sujatha tells the story of Sujatha, a hard-working single mother, and her attempts to ensure her daughter Athira studies and passes her year 10 school exams. Sujatha has big plans for her daughter, but the problem is that Athira isn’t interested in studying and rather than thinking about her future, her dreams involve movie stars instead. Phantom Praveen has directed this Malayalam remake of Hindi film Nil Battey Sannata by Ashwini Iyer Tiwari (who has also remade the film herself in Tamil), with a more Kerala-centric screenplay from Naveen Bhaskar and a few changes to the lead characters. It’s a simple story that focuses on the mother-daughter relationship and features excellent performances from both Manju Warrier and Anaswara Rajan as her somewhat rebellious daughter. I did have a few issues with some parts of the film, but the overall feel good factor and balanced mix of drama and humour ensures Udaharanam Sujatha is well worth a trip to the cinema. 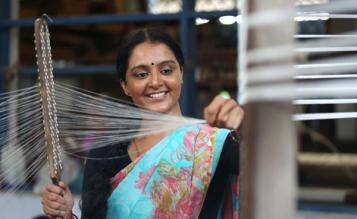 Sujatha (Manju Warrier) gets up well before dawn to start her seemingly endless round of jobs to raise enough money to pay for her daughters education. Sujatha herself left school after 9th standard which she feels has severely limited her choice of occupation, and as a result, she resolves that her daughter needs to do well at school. However Athira (Anaswara Rajan) doesn’t care at all about her studies and has no thought for her future. She lives in the present, watching music videos on TV, playing with her friends and day-dreaming about Dulquer Salmaan. Athira doesn’t appreciate the long hours that her mother works to fund her education and even tells Sujatha that a doctor’s daughter will be a doctor and an engineer’s daughter will be an engineer, so since she is the daughter of a kitchen maid, that is all that she will become. Since Athira also regularly and quite spectacularly fails her tests at her school it seems unlikely that Sujatha’s grand plans will succeed no matter how hard she pushes Athira. 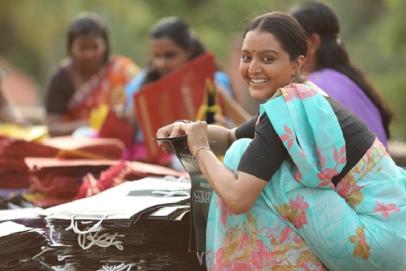 For one of her jobs, Sujatha works for prominent script writer George Paul (Nedumudi Venu) who listens to her daily recitation of her worries and fears about Athira with a surprising amount of tolerance. He finds a friend (Alencier Ley Lopez) who runs a tutoring service and who is willing to offer Sujatha a substantial discount, but only if Athira scores more than 50% in her maths exam. When Sujatha complains to George about the unlikeliness of Athira reaching this target, he suggests that Athira needs some competition and persuades Sujatha to go back to school herself and complete her Year 10 education.

A scene where Athira discovers her mother’s plans and attempts to cajole her mother with promises of improved study interspersed with pleas and general teenager angst is brilliantly written and perfectly performed by Anaswara. Her mother’s response is just as good and gets to the heart of the relationship between the two. Sujatha is determined to make her daughter succeed in life and is willing to go through the humiliation of going back to school to force her daughter to study. Athira’s subsequent tantrums and her refusal to acknowledge her mother’s presence in the classroom are also well handled, while Sujatha’s gradual acceptance by the other students seems plausible given her ability to cook! The good points though are mixed up with some terrible clichés such as the bespectacled nerd of the class who helps Sujatha understand maths, and the horribly abusive teachers who seem out of place in a film about the benefits of education. 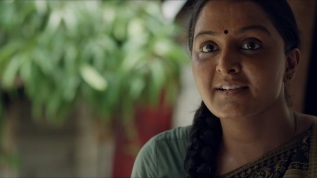 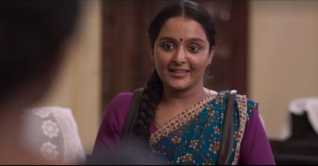 Also problematical is the inference that doing a job such as working in a factory or as a maid is somehow shameful and to be avoided at all costs. While I can sympathise with Sujatha’s desire that Athira gets a good education and has options to choose from, it doesn’t follow that working in these jobs is wrong. Every parent wants the best for their child and particularly would prefer to see that they have a comfortable life, but this doesn’t mean that a house maid should be looked down on, just because of her occupation. However, aside from these points, the rest of the story is a heartening tale of the importance of a good education and how Sujatha manages to change her daughter’s attitude. It’s surprising that Sujatha manages to attend school at all, given her busy schedule of work but Naveen Bhaskar doesn’t let logic get in the way of a good story and after all, perhaps Sujatha has a time-turner hidden away somewhere.

The star here is undoubtedly Manju Warrier who is excellent as the harried mother desperate to wake some ambition in her daughter. Her work ethic is amazing and well portrayed, but what really stands out is the love she has for her daughter and her strength of will to make sure that nothing will get in the way of her dreams. She is fantastic as a concerned mother and completely inhabits the character of a cook/pickle-maker/house-maid/cleaner from a slum area of the city. Anaswara Rajan is also excellent as the bratty and ungrateful Athira who resents her mother’s interference in her life. Her whining is brilliantly irritating and her self-absorption typical of a teenager who naturally knows better than her mother. Together the two actors make a formidable team and it’s the warmth of their relationship that takes the film up a level to make it more than a simple moral tale about the value of education.

The other characters all have a small but significant part to play in the drama, and do it well. Joju George is excellent as Sreekumar, the headmaster and maths teacher who reluctantly agrees to take Sujatha on as a student. His role provides much of the humour, but he also succeeds in making his eccentric character more sympathetic than first appears and he plays a part in assisting Sujatha to further her own dreams. Nedumudi Venu is excellent throughout and he also adds some more light-hearted moments as does Sujatha’s potential suitor while Abhija Sivakala provides drama as a coconut seller who has lent Sujatha money and wants it paid back. Mamta Mohandas is also good in a small role as the local collector who takes on the task of bringing a supply of drinking water to Sujatha’s area and acts as the inspiration for Sujatha’s dreams.

The songs from Gopi Sundar are generally upbeat and suit the mood of the film, but one or two in the second half slow down the narrative and could have been excluded without losing anything from the story. Technically the film looks good, although Manju Warrier’s face is distractingly shiny at times, presumably due to the lack of make-up to give her character more authenticity. The moral message is hammered home a little too heavy-handedly at the end, but for the most part it’s the drama between mother and daughter that takes centre stage and gives the film its appeal. I like that Sujatha has the confidence to go back to school to improve her prospects and that she sees education as vitally important to secure her daughters future. It’s also heartening that she doesn’t need a man to prove her worth and prefers to manage alone despite having a suitor with a good job who could make her life easier. There are enough good points here to balance out the few negatives, and even if the dialogue is occasionally a tad shaky the performances are excellent and the story captivating. Recommended for Manju Warrier, Anaswara Rajan and a reminder that it’s never too late to follow your dreams.