Since I started with the last film in Dorairaj and Bhagawan’s series of James Bond inspired films, it seems fitting that the next I review should be the third in the series – Operation Jackpot Nalli CID 999. Like Operation Diamond Racket, the film stars Dr Rajkumar as the suave and sophisticated Secret Agent 999 who is called in to investigate a series of outsider wins at the Bangalore race course. Naturally there is a devious villain with a convoluted plot and in keeping with the theme, the film has many other secret agent staples including handy gadgets, a revamped car and glamorous women out to distract Agent 999 from his task. Sadly, my DVD doesn’t have subtitles which means I can only make a guess at some of the plot intricacies, but at least the main storyline is relatively easy to follow.

The film starts with the kidnap of noted scientist Professor Shekar just when he has perfected a method of vaporising objects with his highly technical plasma beam machine. The criminal gang gain Professor Shekar’s trust by telling him which horses to bet on to win at the races, which works only because gang member Mena is surreptitiously drugging the horses to ensure the winner. The gang take Professor Shekar and hold him in a secret location, but to prevent his disappearance from making headline news, they have a duplicate who can take his place. Presumably the gang want Prof Shekar to use his annihilation machine to rule the world or some such megalomaniacal plan, but before going ahead they continue to drug horses to lure other businessmen into their clutches. Or possibly not, but they don’t get moving on using the plasma beam death ray thingy straight away and Mena keeps shooting darts at horses for a little longer. Intrepid Agent 444 is on the case, but is spotted by Mena who sends henchmen No 4 and No 6 off to get rid of 444. (Bad guys apparently only get 1 number as their name). After losing one secret agent, it means that there is only one possible man who can solve the problem – Agent 999 aka Prakash! 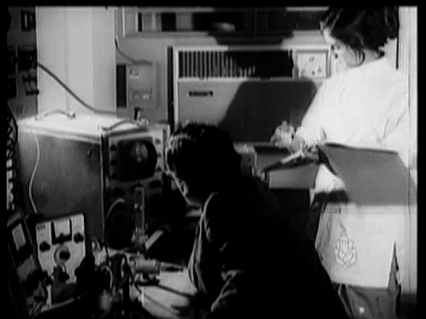 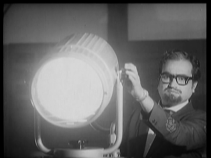 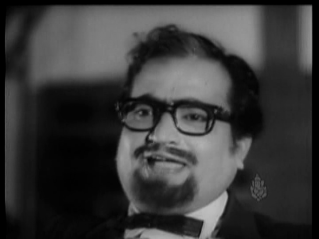 Prakash (Dr Rajkumar) lives in luxury with a bevy of beautiful women in his pad which features a circular bed and automated chairs, tables and a truly awesome telephone answering machine. However all of this is easily left behind when Prakash hears he’s needed to avenge 444’s death and find out exactly what is the Jackpot scheme at Bangalore race course. He takes with him Agent 888, aka Baby (Narasimharaju) who provides most of the comedy in the film. Sadly, without subtitles most of this doesn’t work particularly well and the scenes between Baby and his love interest Bunny are really terrible. However, as a Secret Agent side-kick Agent 888 is fine and Narasimharaju is funniest when he is simply reacting to whichever difficult situation Prakash has left him to deal with next.

Prakash has little trouble identifying Mena and persuading her to spill the beans on her employer. However the Boss knows about Mena’s betrayal and sends his hitmen to the hotel where Prakash and Mena are indulging in a song while frolicking in the pool – as you do. Prakash stops to dispose of one of the henchmen in the middle of the song, picking back up mid-tune without ever missing a beat, but sadly Mena is less successful at dodging the bad guys. This is a perfect scene where Mena’s body is found in her hotel room with ‘Jackpot’ written on the light so that with every swing the word moves back and forth across her body. Chilling, and very effective. 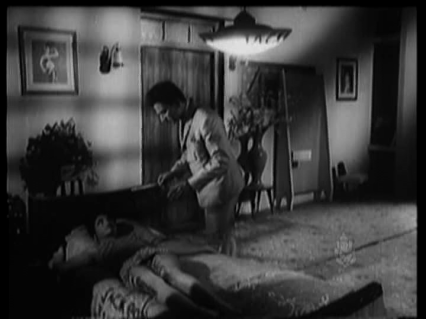 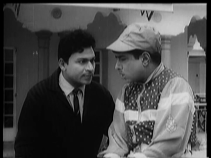 The Boss then switches to Girl No 2 – Mona. Mona is played by a very young Rekha and she makes an excellent ‘Bond’ girl as she attempts to distract Agent 999 from his investigation. Rekha gets to wear some very snazzy outfits, say ‘Yes, Boss’ frequently and even has a chance to torture Agent 999 when he is captured by the bad guys. Of course Prakash manages to escape and takes Mona along with him which prompts her to thank him rather profusely in song. Particularly enjoyable is the way she tells Prakash to proceed while blocking his driving view totally by sitting on the bonnet and dancing!

There are numerous fights, plenty of car chases, frequent audacious escapes and even appropriate use of an ejector seat as Agent 999 discovers what has happened to Professor Shekar and infiltrates the gang’s hidden lair. Adding to the mystery, the Boss is hidden behind a screen or seen from behind in a chair so that his identity is not revealed until the very end. The angled lighting too helps to increase the tension, with clever use of shadows and well thought out decor. It’s all very stylish and noir with added touches such as the ropes tying up Prof Shekar aligning perfectly with the lines painted on the wall and the wonderfully atmospheric arches in the lair. 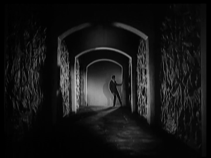 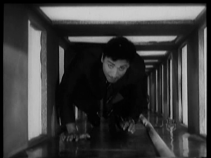 Rajkumar makes an excellent James Bond, managing to look cool and unaffected by his capture and still charming the ladies even when tied up and threatened. No matter what happens, Agent 999 is in control. I think the character works so well because Rajkumar has plays Prakash with a mix of charm and competent action but also isn’t afraid to dress up and play a part when necessary. His bewigged guitar player disguise is wonderfully OTT and made just that little better by having a giant guitar for his dancing partner to use as a stage. 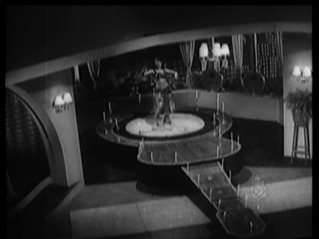 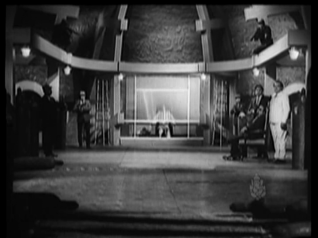 This is another excellent adventure with plenty of action and great performances from the main leads. B. Dorairaj’s cinematography ensures the film looks stylish and G.K. Venkatesh adds music that suits the mood of the film well. The Dorai – Bhagawan team build suspense and anticipation throughout the movie and although there are still plenty of fight scenes, here they are sharper and less intrusive than in the follow-up Operation Diamond Racket. There is plenty for everyone to enjoy in Operation Jackpot Nalli C.I.D. 999 and while Dr Rajkumar is the absolute star of the show, Rekha also shines and provides a good partner for Agent 999. Definitely one to see if you like James Bond, noir cinema or just a rollicking good story! 4 stars