Operation Diamond Racket was re-released in Karnataka theatres last year, and that may be the reason why this 1978 film is actually available on DVD with English subtitles. The duo of Dorairaj and Bhagawan produced and directed a number of Bond-style films starring Dr Rajkumar as Agent CID 999, with Operation Diamond Racket being the last, and possibly also the most successful one they made. The story seems to be very loosely based on Diamonds are Forever but is more choppy action and less actual plot than either the Ian Fleming story or the Sean Connery film. Still, Agent CID 999 lives up to the suave spy image and manages to romance several ladies as he fights his way through numerous villains in a diamond smuggling operation to reach the secretive man at the top. The styling and fashions are definitely part of the reason to watch this film, but the best motive is Dr Rajkumar – he is totally awesome! Whether he’s fighting hoodlums, lounging by the pool or fixing up his hair mid-biffo, he does it all with fabulous style and panache! I am totally hooked and have been looking out for more of his films, which seem to be sadly unavailable subtitled. Still, this is a great place to start and even if the film itself isn’t brilliant it does have plenty of spy gadgets and a couple of great songs to help matters along.

The film starts with CID 999 aka Prakash breaking into a safe (after defeating the obligatory bad guy) and taking pictures of the contents using an advanced technology device – a camera with a flash cube attachment. I clearly remember these since I was around in the seventies, and it’s a nice nostalgic moment to see something practical as an essential part of Agent CID 999’s inventory. 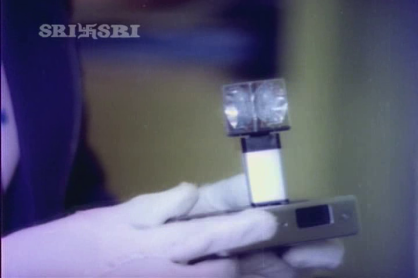 Presumably this was the conclusion to Agent CID 999’s previous case as his subsequent meeting with his boss warns of a new danger. Someone is smuggling diamonds, and there are reports of numerous scientists disappearing. Obviously these are connected and Prakash picks up some clues from Sardar, a delivery guy for the smugglers who tries to extort more money from the criminals and is dealt with appropriately. However, before he dies he manages to impart a few words, which are dutifully noted down by marine branch officer Madhu and passed on to Prakash. Luckily for Prakash, Madhu has a very pretty sister Meena (Padmapriya) who turns out to be useful as a sidekick as well as the main romantic interest for the rest of the film. Although she does have plenty of competition as it turns out! 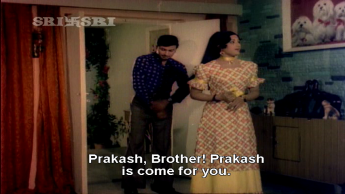 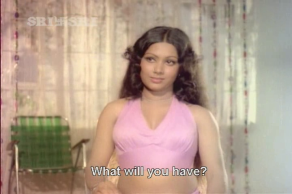 Once Prakash is on the case events move quickly and after tracking down David to a hotel, Prakash cunningly places a listening device on his table under the guise of singing a song. This is awesome for so many reasons. The outfit! The lyrics!! The surreptitious placing of the listening device!!! It just gets better and better and of course during the course of the song, David gets his next set of instruction, just as Prakash and his trusty assistant are listening in.

There are plenty of fights, interludes with various women and Prakash moonlights as a pop singer at a hotel to infiltrate the next part of the gang. I have no reason why this smuggler has a small stuffed bird on his desk, or why he rejoices in the name of Golden Crocodile although it does fit in with the general rather opulent décor of the hotel. He also has an ‘electric chamber’ to dispose of unwelcome guests, but despite all this he’s just one of the many minions involved in the smuggling ring. The various clues lead Prakash to a discovery of diamonds concealed in a shipment of masks and after fighting off yet another bad guy, Prakash heads off to Nepal with Meena on the track of the mysterious head of the diamond smuggling organisation. 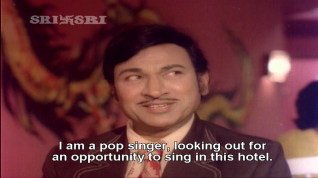 Once in Nepal there are car chases and yet more fights, all with the beautiful backdrop of the Himalayas and stunning Kathmandu. Cinematographer P.S. Prakash does a fantastic job of capturing the mountains and the storyline allows for numerous reasons for Prakash to go running off into the hills and into all that gorgeous scenery. Including more songs of course.

I love this part of the film and there are so many places I recognise in and around the Kathmandu valley from my visits to Nepal. Hence the larger number than usual of screencaps, but really this is a beautifully shot film with some wonderful views of the Himalaya.

After numerous excursions into the hills around Kathmandu, Prakash finally manages to track down the mastermind behind the smugglers and foil his fiendish plot to rule the world using a remote control beam thingy that can turn everything to ashes. Apparently. The test runs shown didn’t particularly convince me and Prakash managed a better explosion with his handy pocket-sized bomb, but megalomania is apparently blind to these little issues. Prakash does seem rather indifferent to the fate of all the scientists who were after all working with the smugglers involuntarily, but he saves Meena and the world from being ruled by an evil mastermind in a violently red suit, so I guess that was enough for one day.

Overall Operation Diamond Racket is a fair attempt at re-creating a James Bond film and does add in plenty of gadgets, an adequate villains lair and a number of 007 references to add to the fun. Considering the era, most of the special effects work well, and there are only a couple of times where the directors resort to the use of small model cars for the crash scenes – a major improvement over the likes of Surakksha for instance. Dr Rajkumar makes a very charismatic spy, while Padmapriya is more than just a pretty face to be rescued at the end, and holds up her own end of the investigation pretty well. The support cast is also good, although being an assistant to Agent CID 999 does seem to be a risky proposition considering most don’t make it to the end of the film. There are also some wonderful sets which add to the lavish feel and fit into the James Bond styling of the film.

The only problem I have with Operation Diamond Racket is that there are possibly too many fight scenes and diversions in the path to the evil mastermind. The film could easily have been half an hour shorter without losing anything major from the story and cutting a few of the fights would have helped move the plot along. However there is still plenty to enjoy and Rajkumar is the absolute star of the show. Definitely an excellent introduction to his films and one I recommend. 4 stars.