NOTA is a bilingual political /coming of age drama that ends up a step above routine thanks to Vijay Deverakonda’s engaging performance as a reluctant CM. It also helps that director Anand Shankar adds a number of real-life events to Shan Karuppusamy’s story which gives the film more impact. I watched the Telugu version as there were limited shows in Tamil here in Melbourne, and the switch from Tamil Nadu to Telangana didn’t make much difference despite most of the incidents deriving from known political issues in Chennai. The main let-down is the villain of the piece who is poorly realised and under-utilised, however there is enough here to make NOTA worth at least a one-time watch. 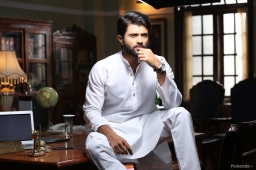 The film starts with a song and a drunken pool party for Varun’s (Vijay Devarakonda) birthday. Varun is a video-game designer based in London, but is home to celebrate his birthday and to visit an orphanage he supports. However, on the way back from the party his car is pulled over by the police and rather than being booked for a drink driving offence, instead Varun is rushed home. Varun’s father Vasudev Subramanyam (Nassar) (Vinothan Subramani in the Tamil version) is the Chief Minister for Telangana, but he is stepping down after being prosecuted in a corruption case. Now as an Australian I’m very used to the top political position changing hands frequently, but here the party makes the choice of the new leader. The situation is different in India where the CM gets to choose his successor and Vasudev picks his own son who is intended to be simply a place-holder until the court case is finished. Varun has no interest at all in politics and just wants to be able to head back to London and his life there, but his general fear of his father ensures that he stays in India and does as he’s told.

Mainly this means Varun stays at home, out of the public eye, and signs whatever documents various faceless party men place in front of him. This he does, without even sparing a glance at the documents he’s signing, until everything suddenly comes crashing down after Vasudev is found guilty of corruption. Suddenly it’s no longer a game and real lives are at stake, pushing Varun out of his complacency and bringing him into direct conflict with the party, and his father. This is where a number of those real-life events are brought into the film, such as the Chennai flood, scandals over the fixing of labels to donated meal packets and politicians treated to a stay at a resort. But there are clichés too. Varun gets pulled into the murky world of politics after a riot where a young girl is killed in a bus fire and her mother’s sooty hands leave symbolic marks over his clean white shirt. His response is an impassioned speech which is overly theatrical and to some extent banishes the authentic feel that Anand Shankar manages to create for some of the earlier scenes between Varun and his political mentor, journalist Mahendran (Sathyaraj). For most of the film however, the dialogues and scenarios are appropriate and create a believable character in Varun.

Vasudev Subramanyam was an actor before moving into politics (of course!) and Nasser does an excellent job with his character. Initially it appears that Vasudev is the ‘bad guy’ as he keeps his family under rigid control, but later events paint him in a more ambivalent light which adds interests to the story. Also good is Sanchana Natarajan as Kayal Varadarajan, Varun’s political rival. Her father is the leader of the opposition party and Kayal is determined to bring down the man she dubs the ‘rowdy CM’ by any means possible, regardless of their previous friendship in college. Thankfully Anand Shankar doesn’t burden the film with an unnecessary romance between the two, but instead gives Sanchana free rein to make her character charismatic and a real challenge to Varun, as might be expected in real life.

Sathyaraj is excellent, as is M.S. Bhaskar as Vasudev Subramanyam’s right hand man, only ever referred to as Bhai. What works well here is Bhai’s adherence to the party line and his uncritical support of Vasudev even though he disagrees with his choices. Also telling are the numerous ‘yes-men’ who all abase themselves in front of Vasudev and act much the same way with his son. However a side-plot involving a financial swindle doesn’t fit well into the plot and the entire thread involving the ‘God-man’ who is manipulating Vasudev behind the scenes is clunky and poorly written into the main action. Inevitably these side excursions start to drag down the rest of the film, and despite some good dialogue between Varun, Mahendran and Vasudev, the second half feels stodgy and is hard to digest. Which is a shame as there is much to like in the underlying political story. Varun’s coming of age within the political system is handled well, and his rivalry with Kayal works well to initiate Varun into the dirty side of politics. 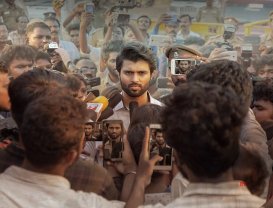 There are only 2 songs in the film and both are modern dance numbers, one for Varun’s party and the second at a nightclub where Varun has been drugged.  C.S. Sam’s music is fine but doesn’t particularly stand out and the generic background dancers add even less to the choreography. I’ve added the Telugu version as this is the one I saw in the cinema, but the link to the Tamil version is here.

If the film has stuck more closely to the political issues then this could have been a very good story indeed. Instead the various sub-plots dilute the impact of the political scenes and it’s only the strong performance from Vijay Deverakonda that prevents his character from becoming just another mass movie hero out to save the world. Thankfully there is more backstory and just enough intrigue to make NOTA worth a look, while the real-life political situations do add another level of realism to the plot. The excellent support cast are also well worth catching as they all do justice to their roles. Overall, not a bad début for Vijay Deverakonda in Tamil cinema and another interesting choice for an actor who only seems to be getting better with each film.