Anji is an unashamed tilt at a commercial blockbuster with an obviously huge budget and everything including the kitchen sink by way of recommended masala ingredients. Kodi Ramakrishna directed Devi, Ammoru, and the more recent Arundhati, all of which had big special effects and equally big performances. I think those films are more effective than Anji overall as the stories were less obviously ‘inspired’ by Hollywood. Also I suspect that casting such a big name hero skewed the story towards him, leaving mostly comic relief and buffoonery for the other performers. But the visuals are pretty good and Chiranjeevi brings his own style and verve to the adventure.

Back in 1932 a nasty man with blue contacts and huge teeth (Bhupinder Singh) tried to steal a sacred relic, the Aatmalingam. The Aatmalingam catches the waters of the Akasa Ganga every 72 years, and drinking that water grants immortality. Luckily for us and not so luckily for him, he triggers the defences around the Aatmalingam. Bhatia barely escapes, losing an arm to a sentient flying sword. 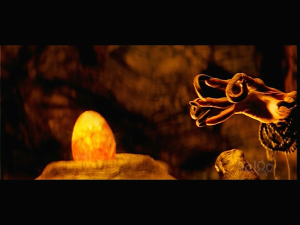 I must just question the wisdom of sending a man with those fingernails to do a delicate job of thievery.

In 2004, when the heavenly miracle is due to occur again, Bhatia (now overacted by Tinnu Anand with odd prosthetic earlobes) once again has a crack at gaining supreme power. A diary containing the pertinent lore was sent to Swapna (Namrata Shirodkar), a student in the USA, to keep it safe. She returns to India and thanks to fate and public transport, meets Anji (Chiranjeevi) and is pursued by idiots (MS Narayana and gang). After hiring Anji to escort her to her destination, the two realise they have to protect the Aatmalingam (and all the people) and defeat the bad guy. They join forces in an adventure with epic overtones and rush towards the final confrontation. 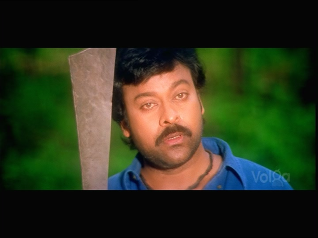 There are numerous scenes lifted directly from other films – the Crocodile Dundee knife scene, references to the Indiana Jones series and Romancing The Stone among others – but with a Telugu mass and Megastar spin. 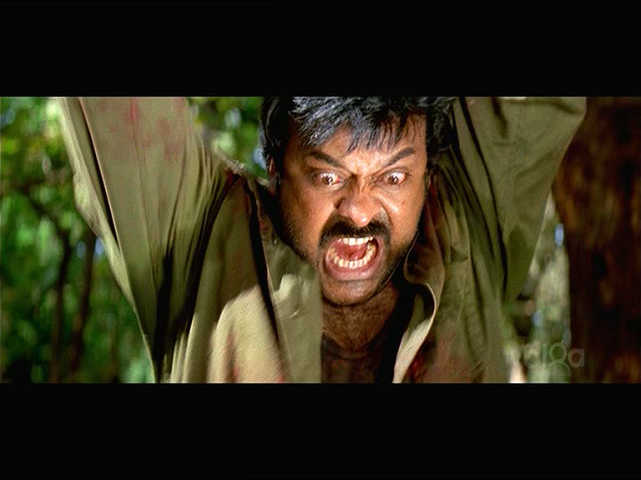 Big special effects are one thing but the actors still have to deliver. Anji rights wrongs, protects the defenceless and keep an eye on the guru (Nagendra Babu in some terrible wrinkle makeup). One thing I consistently enjoy about Chiru’s films is that even in the most familiar material he doesn’t seem to be phoning it in. I liked that Anji was a little bit whiny and ‘why me?’ in some scenes but his morals were sound. Chiru had good rapport with his brother Nagendra Babu and with the other filmi family members. The action scenes (by Peter Hein) are fast and often played for laughs as well as adrenalin, and Chiru highkicks and leaps like there is no tomorrow. Anji is ambushed in the jungle, beaten and pushed over a cliff but Heroes bounce when they hit rock bottom (literally and figuratively it seems). The dances are energetic and lots of fun. Anji is often the object of female fantasy in the songs so I quite enjoyed pondering why someone would imagine that particular outfit or that dance move when their thoughts turned to love (or lust). Chik Buk Pori is beautifully shot and features Chiru and his backing dudes, Ramya Krishnan as a flirty con artist, singing orphans and a random white chick. Who could ask for more? 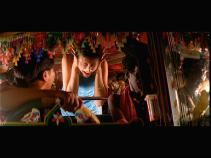 Namrata Shirodkar is perhaps best known as the woman who persuaded Mahesh Babu he could wear t-shirts, AND wear them one at a time. Oh, and she is a former Miss India. Swapna seems like a smart modern girl while in the US – she flies a plane, drives a fast fancy car – all of which is promising in an adventure. So I was confused when she came to India and walking and talking simultaneously seemed to be rather challenging. Her acting mostly ranges from jiggle and giggle to SCREAM and grimace. And the Telugu dubbing gives her a breathy little girl voice which is just annoying. She doesn’t have great chemistry with Chiru, but romance is a fair way down the ranks of subplots which was refreshing. I was expecting more substance in this role based on Ammoru and Devi which had fierce female leads. Namrata’s performance holds up reasonably well as she wasn’t challenged to deliver much more than be a foil for The Hero. Although Swapna did remember some of her foreign skills and I was pleased to see her steal and hotwire a bus to save the obligatory orphans.

The songs are well integrated into the action so they don’t halt the momentum. I wouldn’t care anyway because Chiru! Dancing! Lawrence is credited as a choreographer and he works so well with Chiranjeevi. Swapna throws some bark on the fire and ends up stoned. He knows what it is but he inhales anyway (eventually, after helpfully explaining what was happening). All of which leads Abbo Nee Amma. Om Shanti Om is stylistically a little weird but Namrata’s outfits add some entertainment value even if her dancing doesn’t. Reema Sen makes an appearance in Mirapakaya Bajji that has excellent use of Chiru. 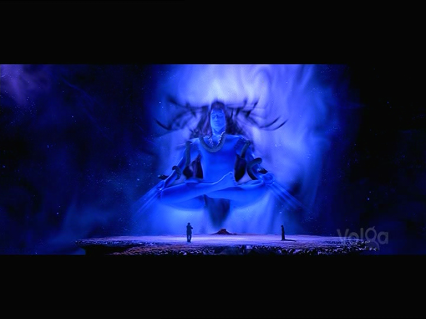 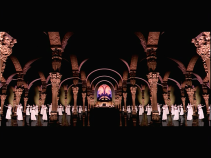 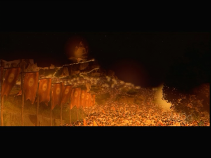 There are some cool effects but there are also polyester stick on beards and an unconvincing roasted lizard on a stick. And a baby crocodile that squeaks like a rubber mouse. But I was pleased to see that when Anji’s dog attacked to save a family member it was clearly a stuffed toy and not a real dog being shaken around. And the horse stunts were not too scary. Where the adventure intersects more with history and religion, the quality and scale of the effects improves although the gore levels were consistent throughout. The religious elements are woven into the action very well and give the story more substance. In one scene Anji accidentally does the right things in the right order and is protected from the giant snake and flying sword. Because I understood what he should do I found the sequence gripping, where sometimes I wonder ‘who made this nonsensical ritual up?’. Some of the magical effects when the Aatmalingam is discovered are very pretty, and there are some excellent locations and sets. Maybe Kodi Ramakrishna is a thrifty director and spends his budget where it will have the most impact. The final confrontation takes place in the Himalayas and Heaven, under the eye of Shiva. It’s all quite grand and otherworldly.

Anji is entertaining from start to finish. My DVD ends quite abruptly following the showdown between Bhatia and Anji but I am quite happy as Swapna was doing something useful for a change, and I suspect if there is a missing scene it probably has singing orphans. Chiru owns his role and his energy is evident in every scene. If you like fantasy or supernatural adventures or have a soft spot for Indiana Jones and Chiranjeevi then I highly recommend Anji. 4 stars!