Mardaani is a crime drama from director Pradeep Sarkar and writer Gopi Puthran based around the investigation of a drug smuggling business and child trafficking ring in India. What makes it rather more unusual is that the cop chasing after the bad guys isn’t the usual rough, tough and unbeatable hero, but instead is the equally rough and tough but rather more pragmatically sensible Rani Mukerjee. As Senior Inspector Shivani Shivaji Roy, Rani takes on a crime boss and his gang when a young street vendor she has previously rescued goes missing. It’s a straight police procedural drama for most of the film but does veer off into overly melodramatic action for the last 15 minutes or so, presumably to add more commercial appeal. However Rani is superb, Tahir Raj Bhasin is excellent as the villain of the piece and overall the film works as an action thriller that is more realistic than most. 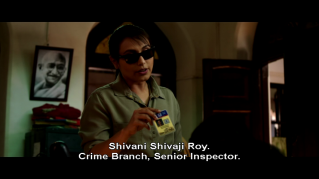 The film opens with the apprehension of a criminal by Mumbai’s Crime Branch, and the raid and subsequent capture nicely illustrate the rapport Inspector Shivani has with her team and the respect they have for her. They all joke together on the way to the raid but police officers Jafar and Morey still obey every order without question once the action begins. Dressed in a sari and noticeably understated make-up, Shivani is a cop who follows the rules when necessary, but also knows just how far rules can be bent without causing any visible stretch marks. She’s equally capable whether she’s on duty as a police officer, or at home looking after her family and is smart enough to reason her way through a case rather than bludgeoning her way to a result. The end product is a more realistic police officer and a more probable investigative team, at least as far as the world of cinema is concerned. 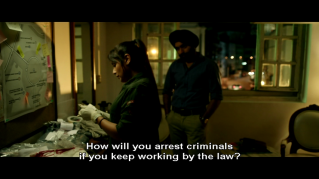 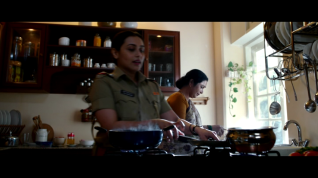 Shivani is married to Dr Bikram Roy (Jisshu Sengupta) and the couple look after her orphaned niece Meera (Avneet Kaur), giving Shivani a realistic and stable home life as well as illustrating that she is more than just a kick-arse cop with excellent multi-tasking skills. The person Shivani seems to care about most though is Pyaari (Priyanka Sharma), a girl Shivani rescued and placed in an orphanage and school after Pyaari’s uncle tried to sell her on the streets. When Pyaari disappears, Shivani accepts Meera’s assertion than Pyaari has been kidnapped, and given the truly frightening statistics given at the end of the film it does seem the most likely scenario. Shivani quickly establishes that one of the men associated with the orphanage is implicated in Pyaari’s disappearance and her subsequent investigations lead her to a drug dealer who is also part of the gang. From here it’s a short step to Vakil (Anil George), and the realisation that she has stumbled upon a large and well organised drug smuggling and human trafficking ring. Vakil is the face of the organisation and the man the drug dealers think is in charge, but standing in the shadows behind Vakil is the real boss, Karan (Tahir Raj Bhasin). 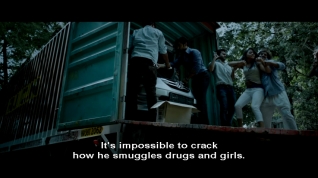 One of the reasons why the film works so well is the developing relationship between Shivani and Karan and the careful steps they take to outwit each other. Karan calls Shivani when her investigation begins to impinge on his organisation, and their subsequent phone conversations become an integral part of the story. At one point Karan introduces himself as Walter White, a nod to the Breaking Bad character, and a clear indication that he considers himself a criminal mastermind. Generally Bhasin plays Karan with an aura of cool authority mixed with genuine menace as he orders his various lackeys around and keeps track of his business empire. In scenes where the kidnapped girls are stripped, showered and basically dehumanised, it’s obvious Karan sees them purely as merchandise to be sold, a tactic that moves the film away from tacky voyeurism into a sinister and shockingly more realistic place. However when he calls Shivani, she refers to him as ‘the kid’ and remains cool and calm, refusing to rise to his threats or attempts at intimidation and it’s Karan who struggles to keep his composure. Shivani remains professional when dealing with Karan despite her fears for Pyaari, and it’s only towards the end that her self-control slides and she embarks on a more vigilante style of action. 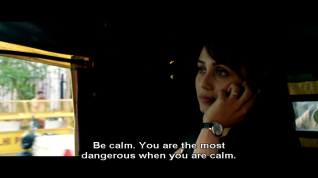 While the film didn’t need quite so much focus on the plight of the girls, their abuse and degradation is effective in building outrage that is later used as a justification for Shivani’s unconventional method to bring Karan to justice. The film also loses some credibility when Rani morphs into a more typical filmi-hero and channels her inner Salman Khan for the last few scenes, taking the law into her own hands. It dulls the effect of the rest of the film, although there is some satisfaction is seeing the abused get their own back on their abusers. There is also a tendency for the film to become rather preachy towards the end with Shivani lecturing the police chief in Delhi when he is reluctant to pursue the human traffickers, but the statistics that play over the end credits are likely an indication of the point Pradeep Sarkar was trying to make. The details about the massive numbers of children who go missing and the extent of the child sex-trade are chilling and anything that raises awareness, and hopefully subsequent prosecutions and a downward change in these figures is welcome. It’s not all about ‘the message’ though, and for the most part the film is an action thriller with an engaging storyline. 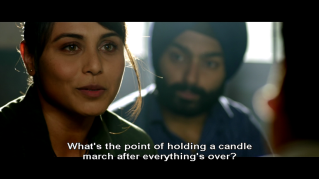 Mardaani keeps to a standard storyline, but the plot is well structured with realistic characters and feasible action that keeps the film believable. Rani and Bhasin are the standouts but the support cast are all good, although the young actresses playing the girls do become overly dramatic at times. It suits the situation though and at least none of the scenes with the girls are remotely suggestive but rather reflect the brutality of the kidnappers instead. The film is a different approach to a police drama and while it’s not an overtly feminist film it is good to have a strong female character as the lead, particularly when she takes on a more traditionally masculine role so successfully. Worth watching for Rani, a more realistic storyline (at least until near the end) and Tahir Raj Bhasin, who will hopefully live up to the promise he shows here. 3 ½ stars.