Smoking is not something you see very often in Australia since there are laws that prohibit lighting up in most public spaces. As a result, a film that’s all about smoking seems a really strange topic to me, especially one that seems to treat the subject matter so lightly. It’s also quite ironic that the story ensures there are statutory warning notices displayed on the screen almost constantly, and in addition to the smoking and drinking warnings, there are also warnings about not wearing a motorcycle helmet, not wearing a seat belt and a declaration at the start advising that violence against women is a crime. However, Tovino Thomas makes this meandering story worth watching as he transforms from a clean-shaven school boy to a bearded and chain-smoking adult with an interest in local politics. Not a must-see drama, but a pleasant excursion in good company that benefits from a strong central cast and a generally upbeat approach. 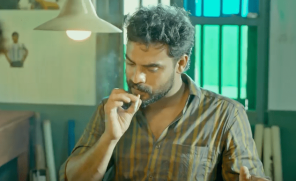 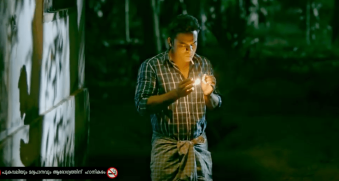 The film starts with a birth, but the baby doesn’t breathe until his uncle blows a puff of smoke into the baby’s face – not a recommended way to start a child breathing! After this medical miracle, young Bineesh (Maheen) grows up as a normal village kid, although the local shopkeeper (Jaffer Idukki) is used to him buying cigarettes for his uncle Sugunan (Sudheesh) and using the change to buy sweets and snacks. This makes the teenage Bineesh (Tovino Thomas) the ideal person to send for cigarettes when the group of school friends decides to try smoking one day after school. While the others cough and splutter, Bineesh has no problems, since after all, his first breath was full of cigarette smoke. Oddly, while the students are having their first experience of smoking, their cigarettes are blurred out, I guess in some sort of censorship decision. It must be the school uniform that’s the issue, since the same actors are shown moments later without any blurring when they are supposedly older, but it still makes very little sense. 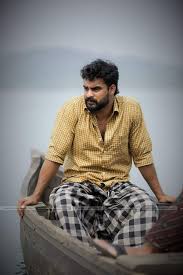 Tovino Thomas makes a convincing teenager, mainly due to his posture and body language, but he really hits his stride as the adult Bineesh. By this stage his smoking has become a chain habit that earns him the nickname of Theevandi, after the old-fashioned smoky steam trains. Bineesh hangs around the village with his friends, and doesn’t appear to have any gainful employment, although he seems to have a reasonably ready supply of cash to keep buying cigarettes. I was expecting some of the usual family rows with Bineesh being forced by his father to find a job, but his family seem happy to let him drift, although there is an undercurrent of concern about his smoking.

There’s a glimmer of hope on the horizon though as Bineesh is in love with Devi (Samyuktha Menon) who has promised to marry him only if he gives up his disgusting and smelly habit. But Bineesh doesn’t take her seriously and only pays lip-service to the idea, with his nonchalance and lack of commitment eventually resulting in a breakdown of their relationship. Samyuktha Menon is very good here and she gets the balance between heady romance and responsible common-sense just right. She’s the one who climbs up ladders in the middle of the night to speak to Bineesh, but she’s also the one with a job and a much clearer idea of where she wants to go and how to get there. Devi is a strong character who has the determination not only to stand up to her parents, but also to turn her back on Bineesh when he lies and hides his habit from her.

Bineesh is an interesting character and Tovino is excellent in this portrayal of a young man who his happy to drift until he works out what he wants from life – although he’s pretty clear that he wants Devi to be a part of it. As long as he can continue smoking , which is really his only other passion. To be fair, he’s probably more passionate about smoking than Devi, and certainly shows more emotion when faced with circumstances that force him to give up cigarettes. Despite this imbalance, the relationship between Devi and Bineesh is charming and sweet, with a realistic approach to the conflict between them. Oddly, although there is a warning at the start of the film, it’s Devi who slaps Bineesh every time she sees him smoking, and not surprisingly this isn’t a strategy that succeeds.

Writer Vini Vishwa Lal brings in a political angle with Vijith (Saiju Kurup) who is married to Bineesh’s sister. Vijith is active in the local party and Bineesh and his friends become involved as a result. One of the leading party members is Devi’s father Madhu (Suraaj Venjatammoodu), who generally disapproves of Bineesh and isn’t keen at all on the proposed marriage with his daughter. Adding fuel to the fire, Madhu becomes involved in a struggle with Vijith for the leadership after the party leader Balachandran (Shammi Thilakan) meets with an accident. After arguments and posturing on both sides, the leadership contest comes down to a bet that Bineesh will stop smoking until after a major protest organised by the party. But with Madhu and his supporter Libash (Vijilesh Karayad) determined to win at all costs, Bineesh’s struggle to overcome his addiction becomes a more public battle that he seems unlikely to win.

This is an interesting story that could have made more of Bineesh’s struggle to stop smoking. His initial attempts appear realistically half-hearted and the lengths he goes to in order to hide his smoking from Devi ring true, but the latter half of the film fails to show just how difficult it is to break the habit. Although Tovino Thomas gives a good portrayal of a man driven to the brink by his cravings, director Fellini T.P. takes the easy way out and gives Bineesh no choice other than to break his addiction. The methods employed by Vijith aren’t likely to be useful to anyone genuinely looking for a way to stop smoking and that to my mind seems to be a lost opportunity. The political bun-fighting also seems rather contrived and isn’t helped by Surabhi Lakshmi overacting as the corrupt party secretary. In fact, overall the political thread is weak without any real focus for this part of the story and it’s difficult to know if Fellini was trying to send a message about corruption, or just play the situation for some laughs. The best parts of the film are undoubtably those that focus on Bimeesh’s struggle and the song Oru Theeppettikkum Venda is a perfect example of how well Tovino Thomas portrays this inner conflict.

What also works well are the relationships , particularly between those between Bineesh and his friends, family and Devi. Tovino Thomas makes his character work and despite the vagueness of the screenplay, he keeps his part in the story focused and engaging. The support cast too are generally good and Suraaj Venjatammoodu, Saiju Kurup and Sudheesh excel in their supporting roles. The music from Kailas Menon is lovely and although the songs in the second half are less effective, those in the first half fit well into the narrative. Gautham Sankar does a great job behind the camera and the film looks beautiful with scenes set on an island appearing lush and colourful. This is a thought-provoking concept for a film, but Vini Vishwa Lal and Fellini T.P. seem to have run out of steam half way through, resulting in a film that doesn’t quite succeed as a whole. Nonetheless, it’s worth watching for Tovino Thomas and Samyuktha Menon, and it may perhaps convince people that smoking really can be injurious to your health.