The Sapphires has just been released and I highly recommend it if you get the chance to see it. It boasts a strong cast, a story inspired by real indigenous Australian women, groovy 60s music and fashion, romance and drama, set against the backdrop of the Vietnam War.

You don’t really need to know the history or politics of the era to enjoy the film, although there are some elements that might not make as much sense. Director Wayne Blair and writer Tony Briggs (the real life inspirations for The Sapphires are his mum and aunties) focus on the individuals and their interpersonal conflict and growth. It shows an aspect of my country’s complicated history and legacy that is sometimes overlooked but presents it in a simple way that is all about the people, not  a movement. Their stories reflect larger issues, but there is little tub-thumping.

The characters are introduced in a couple of delightfully brief and precise scenes. Bossy Gail, highly charged Cynthia and young Julie are sisters on the remote Cummeragunja mission. They enter a talent competition emceed by drifter Dave Lovelace, and lose to a talentless white woman who murders a Seekers song. They lose because they are black and it is clear they aren’t welcome. In an ‘only in movies’ decision, they join forces with Dave and line up an audition to entertain the troops in Vietnam. In Melbourne for the gig, they go track down their long lost cousin. Kay was taken from her mother by the mission people and represents the experience of the stolen generation. Tupperware parties are a long way from life on the mission and Kay is embarrassed by her country cousins at first. Tensions flare but the girls get through the auditions and head to Saigon. 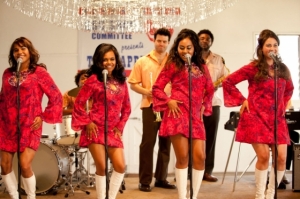 Their experience in Vietnam is limited to glimpses as they travel and encounters with the US servicemen in the clubs and bases where they perform. I didn’t mind that the war was almost peripheral as it suited the scale of the story, and the way the girls reacted very much reflected their characters and experience. This is their story, told in highly entertaining style. 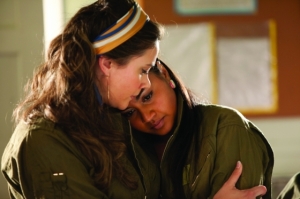 Gail is an aggressive woman with a chip on her shoulder, often using threats of violence or actual violence to get her way. But she is also a loving sister and friend, and her smile is radiant when she is happy. The reasons for Gail’s behaviour are revealed as she becomes less guarded. Her relationship with Dave adds another dimension to Gail’s character and through him we get to learn more about what drives her. Deb Mailman is one of my favourite actresses and speaks volumes with just a look.  Her eyes would sparkle with hilarity when Dave tried to be cool and I completely believed her grief when she sang the blues. She is perfect as the bossy and abrasive Gail.

Chris O’Dowd plays Dave Lovelace as the stereotypical drunk Irishman who sorts himself out when he finds a purpose. He appoints himself as the group’s manager and stops them singing Country & Western which is reason enough to love him. Dave explains the negative influence of Country music as follows – Country music is all about people who have lost everything and then sit around whining whereas soul music is about people who have lost everything but are fighting to get it back. And that is a part of the story, the fight to repair yourself and to ultimately be happy. His performance is in the lackadaisical style I expect from Chris O’Dowd, but no less charming for being predictable. Dave’s asides and one-liners are fun and his dance moves are tragic.

Kay (Shari Sebbens), Cynthia (Miranda Tapsell) and Julie (Jessica Mauboy, an Australian Idol runner-up) complete the main enesmble. They get a bit less of the spotlight in the film but I think they all have enough time to develop their characters.  Kay was forcibly removed from her family and raised as a white girl. She doesn’t know where she fits in but won’t be bullied by Gail who thinks Kay isn’t black enough. Cynthia is a boy crazy diva and lives life to the fullest. She is outrageous and adds a dash of wild energy to the group. Jessica Mauboy’s acting was generally good but it was her singing (she sang for herself) that really lifted her performance.

The support cast is a mix of familiar and new faces. I liked Judith Lucy as the hard faced bitch who runs the local pub. Kylie Belling and Lynette Narkle are lovely as the sisters’ mother and grandmother. The family home is warm and ramshackle, with welcoming couches on the veranda, surrounded by carefully tended plants and always full of people. It’s a visual cue to the strength of country and belonging for the girls. Kay needs to return home physically and emotionally and Gail needs to welcome Kay back before she can forgive herself. Julie is a single mum, and even though she runs away to follow her sisters there is little recrimination about leaving her son behind. He is with his grandparents and extended family in that loving and inviting home, and it will all be waiting there for her.

Lest this sound too syrupy the film ends on a high spiked with some tongue in cheek humour, and a bit of a dance.

There are a few clunky scenes although they do serve a purpose in moving the drama along so I forgave them. I liked the energy of the film, the laconic humour and thoroughly Australian language, and I love the music (well, except the country and western) and the fashions of the era.

I read some reviews that criticise The Sapphires for being too lightweight and not showing more of the political context. I disagree. Life can be sad and make you cry and it can be fun and colourful. People can find acceptance and happiness where they least expect it. Not every film has to make an overt statement, and if you pay attention there are some neat observations in The Sapphires. Enjoy it for what it is, and see some wonderful Australian talent.  3 ½ stars!