Aidu Onda Aidu (Five times one is five) is a Kannada film by the director V K Prakash. Known mainly for his Malayalam films this is his first venture into the Kannada language and is being shown in Australia and New Zealand  as part of the Indian Film Festival . The film is based on extracts from 18 Natakangal, a collection of plays by award winning Malayalam author and playwright Jayaprakash Kuloor. There are four short stories in the narrative linked together by the fifth tale of a director trying to make the stories into a film. While the individual stories are all very well told and beautifully shot, the linking narrative is less compelling and as a result the film doesn’t quite make a complete whole.

The film starts with the story of Kantha who is trying to make the film of his dreams.  He takes a year’s unpaid leave of absence from his job and seems to be relying on his unrestrained enthusiasm and the support of his wife.  I think that the actor playing the role of his boss is actually Jayaprakash Kuloor himself, but I’m not familiar with most of these actors so please excuse me if I’m wrong here. As Kantha tries to sell his story he runs into every possible difficulty with the various producers he meets.  People like his story, but it needs more action, more gimmicks, more everything and of course this starts to take a toll on his enthusiasm.  In the course of his struggles we see the four stories he is trying to film. 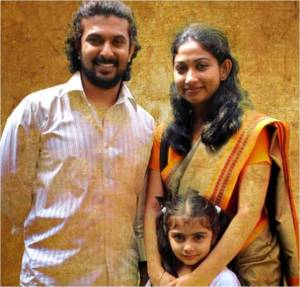 All the tales revolve around the relationships between a husband and wife and although each explores different facets of the marital relationship, at their core they involve communication and the consequences of misconception.

The first story is a charming tale of a new bride and groom which has plenty of humour.  This is told with a very light touch and the two actors appear fresh and natural in their roles.  This song is one of my favourites in the film as Gowri is making yet more payasa for her husband Lokesh.

The next story is a simple tale about the effect of a mirror on a poor couple who have never seen their reflections before. While it’s perhaps hard to believe in their naivety, the story is more of a parable about the effects of jealousy on a relationship. Again the story is told with plenty of light comedy and the song by the pedlar who gives them the mirror is excellent.

The third story is quite different, although it still has at its core the relationship of a husband and wife. This time the tale is much more realistic with less humour and as a result breaks into the almost magical atmosphere created by the other two. The final story goes back into more of a fairy tale like tone and focuses on the rekindling of a relationship during the rainy season. This allows the film to end on an optimistic note, albeit a somewhat soggy one.

These four stories within the main narrative succeed in different ways and the use of a number of directors of photography and editors helps to give each a distinctive feel. The songs in particular are nicely integrated into each and work very well. There is a lot of comedy in the stories although this is very gentle and grows out of the various relationships depicted. I have to admit I don’t know many of the actors here but I was impressed with the performances and thought they all fit their resprective roles well.

The linking story is kept brief and somewhat pedestrian which is perhaps why it doesn’t grab my attention in the same way as the other four tales. There is little exploration of why the director feels compelled to tell these stories and there seems to be a few wasted opportunities to further explore his own relationship with his wife. This is frustrating, particularly when compared to the other short stories which are beautifully complete in themselves and yet allow for a wider interpretation of the relationships portrayed. Kantha is shown as having an early love of cinema and is childishly enthusiastic, but that doesn’t explain why he goes about his film in the way he does. His wife has the potential to be an interesting character as she is prepared to stand by her husband and help him realise his dream despite the hardships incurred, but her motivation is never really fully explored. More development of both these characters would have made their story much more compelling and provided a firmer foundation for the other four tales.

While overall the film is funny and charming, the different stories are quite disparate giving a slightly disjointed feel. A more detailed linking narrative would have made this a much more cohesive film as there is so much else which is excellent. The short stories themselves all are rather fanciful and this is another factor which separates them from the main theme which is very much set in the real world. Its still a film I would recommend watching for the music, good song picturisation and impressive performances from the large cast. This film was a good start to the festival for me . 3 1/2 stars.