Despite winning the National Award for Best Feature Film, I hadn’t heard much about this film until it was recommended to me by a friend living in the UK. Luckily Hellaro was also released here in Melbourne, and I was able to watch this Guajarati film on the big screen last week. And what a treat! Hellaro is a beautiful film, steeped in the vibrant colours of Kutch with an amazing soundtrack and excellent performances from all the cast. The story is simple, but powerfully compelling and overall, it’s an absolute joy to experience at the theatre. 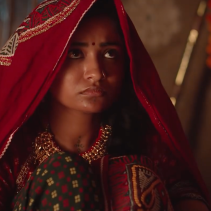 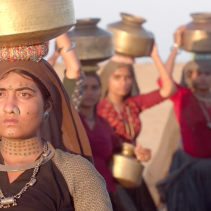 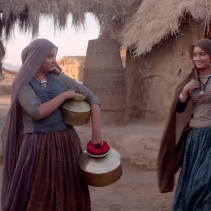 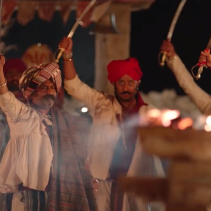 The end titles advise that the film is based on folklore and both the telling and the subject matter fit into that style of story. Hellaro is a tale about female oppression and the struggle to overcome patriarchy as the women of a small village in Kutch try to escape their controlling and violent menfolk. The women are kept virtual prisoners by the men, and rarely leave their homes except to collect water from a small lake close to the village. Singing and dancing are banned, along with sewing and anything that might bring joy to the women’s dull and barren existence. New bride Manjhri (Shraddha Dangar) enters into this misery with her soldier husband Arjan (Aarjav Trivedi), who has been allowed home from the border for his wedding. On his wedding night he explains the rules of the village to the educated and city-bred Manjhri and advises her to cut her own wings and horns as it will hurt more if he has to do it himself. 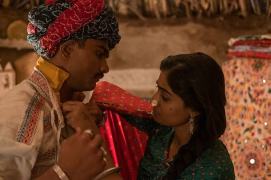 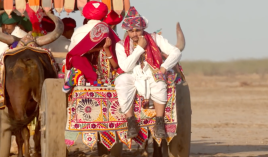 Being educated and from a more liberal family, Manjhri raises questions about the village customs. The only chance she gets to speak to the other women is during their daily trek to the lake, but even then the women are conservative and hesitant to step out of their restrictive roles. On the way to fetch water one morning the women find a man dying in the desert and after initially avoiding any contact, they finally revive him with the water they are carrying home. Manjhri takes the lead in this rescue as many of the women are frightened and want to leave the man to his fate, well aware of the consequences if their husbands find out they have helped a male stranger. Manjhri’s compassion is quickly rewarded as the man they have rescued is a dholak called Mulji (Jayesh More), who is persuaded to play his drum for them, giving the women a chance to escape their day to day reality and experience freedom. 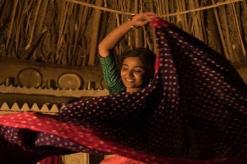 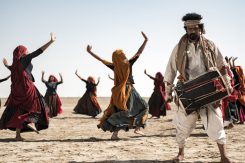 In the village the women hide in their houses as the man dance garba with swords, twirling their moustaches and ironically praying to a female goddess for rain. In the desert the women dance garba to the beats of Mulji’s drum in a brief moment of happiness and release from their suffocating lives in the village. The mix of music and colour is intoxicating and yet violence is never far away with the ever-present threat that the men will find out exactly what the women are doing.

Although the story follows a linear path, there are layers within the basic tale and adding in caste politics and the fate of widows in rural India adds more depth and texture to the plot. In Hellaro, writer/director Abhishek Shah and co-writer Prateek Gupta have taken a simple idea and crafted a vibrant screenplay that’s enhanced by Saumya Joshi’s dialogues. Small details build on each other, crafting a detailed picture of a world that really could be any time or anywhere, adding to the fairy-tale atmosphere of the film. The women are superstitious and some believe that their ‘sin’ of dancing may be the cause of various mishaps around the village, while others are fully aware that the men are the source of all their troubles. Throughout the film, the characters are mostly painted as either black or white, but each of the women have defining traits that round out their characterisations to some extent. While they are still mostly brief sketches, each of the actors shows personality and ensures each character is seen as an individual.

The men are less well defined and are mostly seen as brutal and violent although a couple are shown in a little more depth. Bhaglo (Maulik Nayak) travels routinely between the village and the city and as a result is rather more cosmopolitan in his views. He entertains some of the villagers by re-telling the stories of the movies he has seen, although the men are more interested in the bedroom scene from Bobby than hearing about Basanti dance in Sholay. Bhaglo’s open-mindedness and awareness of the women’s situation is well contrasted with Arjan’s more traditional view, despite both men having travelled outside the boundaries of the village.

As the dholi, Jayesh More has few dialogues, but he is pivotal to the story and is excellent in the climax sequences. Shraddha Dangar is fantastic in the role of Manjhri, but all the women are superb and I wish I knew more about them to be able to differentiate individual performances. Mehul Surti provides the wonderful music while choreographers Sameer and Arsh Tanna spin magic with their brilliant garba routines. Cinematographer Tribhuvan Babu Sadineni captures the harshness of the desert, but also its beauty, along with the fantastic colours of the women’s clothing and the details of the house interiors. The film looks amazing in every frame and it’s this mix of music, colour and performances that make Hellaro such a memorable experience.

The only downside is that this a rather simplistic view of patriarchy with mostly very binary characters. The few who do show more complexity are still mostly good; that is progressive, understanding, empathetic and believers in equality with little or no negative traits. Those who are bad show few redeeming qualities, but in reality most people are rarely quite so black and white and societal divisions are not as clear or as clean as they are in Hellaro. What does feel more contemporary though is the banding together of the women over a common source of happiness, along with the determined but passive way in which they fight back. Their taking a stand feels realistic and plausible, while the overall joy of dance that is so integral to the film is perhaps the one thing that will unite both men and women.

Hellaro really is a beautiful film in terms of the framing of the shots, the music, costumes and choreography. Although the subject matter is often ugly, the exuberance the women show while dancing and the wonderful imagery ensure that this is a film that will stay with me for a long time. Highly recommended, especially if you can find it in the cinema.