Vasan Bala takes all the required masala ingredients and tosses them around. And throws in some real talk about love, loss and growing up, wrapped up in offbeat humour, visual gags, movie references, and tons of Hong Kong film style action.

I knew I was probably going to like this film from the get go when the hero flashes back to when he was still in utero…with his parents watching Chiru dancing to It’s A Challenge in Aaj Ka Goonda Raj! 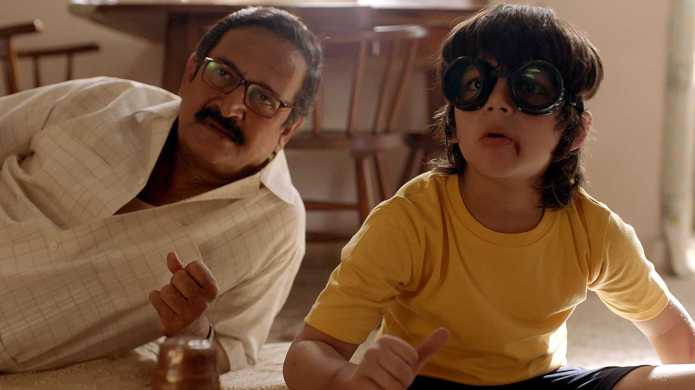 Surya grows up under the care of his dad (Jimit Trivedi) and granddad (Mahesh Manjrekar) after his mother is killed in a bungled theft. He has congenital pain insensitivity and according to the movie medicine, will probably die by the age of 4. So his anxious dad almost literally wraps him in cotton wool. His only childhood friend is Supri, a neighbour who is his opposite in many ways. She never says anything but she feels pain. Her abusive drunk dad is the opposite of Surya’s too. Ajoba feeds Surya a diet of action and masala movies to try and teach him what pain means and how to recognise injuries, and insists that he stay well hydrated. There is some sense in teaching the kid how his body works and what could go wrong but it didn’t help his emotional development. Both kids become obsessed with Karate Man, a one-legged karate master who once beat 100 men in a single fight. Surya believes that life will conform to the rules of films, and he is a hero – the next Karate Man. So when people treat him as a villain, he is bewildered and annoyed. The family moves out of town to his grandfather’s house and Surya loses touch with Supri.

Adult Surya (Abhimanyu Dassani) quotes his grandfather who said “Behind every mind blowing story are some pretty bad decisions”. He is an unreliable narrator, often rewriting scenes on the fly or drifting into a filmi fantasy before the world crashes in. He is as influenced by Bruce Lee and the Terminator films as he is by Amitabh and Rajinikanth. And he’s not particularly bright so he is almost guaranteed a succession of mind blowing stories. Dassani has classic chocolate hero looks, an exuberant acrobatic physicality, and an expression of intense innocence that can be hilarious or can make me want to deliver the one tight slap he sometimes needed.

Supri (Radhika Madan) re-enters his life in a beautifully choreographed fight underscored by Kishore Kumar singing “Nakhrewali”. I really loved that rather than race in to take over, he watched her kicking arse and was utterly enchanted by her skills and strength. It took a while for them to recognise each other but Karate Man divided them and brought them back together. Radhika Madan clearly worked hard for this role. She does a lot of physical action and portrays Supri as strong but not invincible, and not just a comedy prop for the men in fight scenes. I liked her performance a lot and found her character a necessary and welcome counterpoint to Surya’s more cartoonish perspective. She is resilient, and a sound thinker who doesn’t carry shame or guilt that isn’t hers to own.

Supri’s life was no fairytale. I cringed to hear her dad tell her boyfriend Atul to just slap her if she was difficult. It so unusual for films to even hint at domestic violence issues that I was pleasantly surprised when Supri and her mum had some real talk. Ma doesn’t want Supri to throw her life away on a bad marriage but Supri is struggling to know what else to do. She doesn’t earn, they need money for medical care, and she simply doesn’t know where to start. Mother and daughter talk about their feelings and the demands of life and there is no drama, just love. Supri says her mum sacrificed to nurse an abusive husband back to health so it is her turn now. But Ma is an interesting woman and she says she can’t break her internal programming to keep supporting her husband, but she doesn’t want Supri to follow in her footsteps. She encourages her to get out and live her own life. 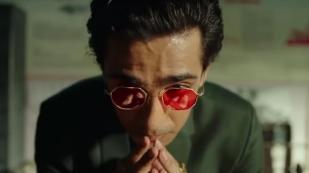 Gulshan Devaiah rounds out the main cast in a brilliant dual role performance. We get the history of Mani and Jimmy in a funky flashback as one becomes a cliché drunk karate master and the other a cliché psychotic villain. How good is this retro funk sound?

Gulshan hits all the right notes in both roles and he commits. I loved his Karate Man style and if there was an award for best use of citrus fruit in a fight sequence, he would win it hands down. Mani is Supri’s mentor although he knows Atul is giving her grief and pushes her away for her own good. He reluctantly acquires Surya as a sidekick on his quest to get the locket back. Jimmy is grandiose, verbose, and constantly disappointed and dismayed by his goons and their lack of style. And when they are together, it’s like they’re both 9 years old again.

The film comes across as a loving tribute to movies and action, not just a piss take. It’s often laugh out loud funny, with a succession of blink and you’ll miss them references. Karan Kulkarni and Dipanjan Guha riff on some classic sounds and the songs are generally well placed. I loved the use of old filmi songs in the background, and the hoardings and murals that featured movie stars. Apart from being lovely it helped fuse Surya’s inner life to the world where this action was taking place. Bala uses some visual gimmicks to allow viewers to be aware of what was going on in real time, but the fight scenes are real and very physical with none of the bad CGI so prevalent. At its heart the movie is full of old school mass goodness.

The movie is on Netflix so you have no excuse. 4 stars!