Shiva Nirvana’s Majili is a romance that feels oddly dated where the characters make some very strange choices, and the plot harks back to attitudes that might have seemed plausible 30 years ago. Naga Chaitanya plays a cricket player whose life is destroyed when he loses the girl of his dreams, while Samantha is the woman waiting patiently for him to notice her. The film is helped considerably by good performances from the main leads, but it’s the support cast of Posani Krishna Murali, Suhas and Rao Ramesh, who end up making the film more interesting than the story would suggest.

The film begins with Poorna (Naga Chaitanya) as a miserably grumpy cricket umpire who spends his night getting drunk in a specific hotel room. The story behind his descent into the bottle is told in flashback when he was a younger wannabe cricket player, and his father had just given him a year to work at making it into a career. Shortly after landing a place on the Vizag Railways team, Poorna meets Anshu (Divyansha Kaushik), the daughter of a navy officer based in the town and the two start a relationship. It’s a patchy affair right from the start as there is little chemistry between the couple and their social divide makes their meetings awkward and clumsy. That might have worked, except there doesn’t seem to be any reason for Anshu to prefer Poorna over anyone in her own social circle, and after he puts her into a situation where she is almost raped, Anshu’s continued desire to be with Poorna seems even less likely. Although Chaitanya tries his best, this is just another typical love story, with the usual parental opposition and a bad guy in the form of Bhushan (Subbaraju). Divyansha Kaushik is bland and unobjectionable, but the romance is all just too unlikely to make any impression, and the finale that ends with Poorna in a hotel room seems completely implausible and a whimpering end to a supposedly grandiose love affair.

Poorna’s subsequent descent into alcoholism and heartache-induced torpor is also overly extreme for such a lacklustre romance. He wallows in his misery and seems unable to find anything worthwhile to do with his time other than mourn the loss of his ‘one true love’. However, at some point in the intervening years he somehow manages to get married to Sravani (Samantha Akkineni) who puts up with his idleness, drunkenness and morose personality with completely unlikely composure. The story tries to make us believe that she always loved Poorna and is happy simply to be his wife, despite the cold shoulder treatment she receives and his total lack of support – either emotional or financial. In fact, it’s Sravani who supports the family with her job as a railway clerk since Poorna’s father (Rao Ramesh) has retired and Poorna is too busy being miserable. 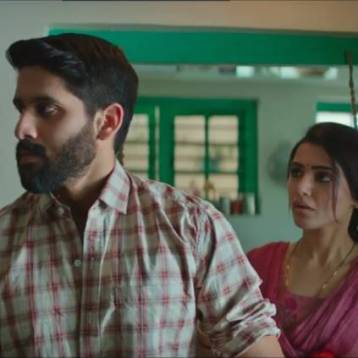 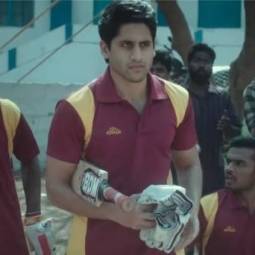 Thankfully, despite her irritatingly subservient attitude, Samantha breathes life and energy into the film. Her interactions with her father (Posani Kirshna Murali) and Porna’s father (Rao Ramesh) are the perfect mixture of funny and sad, and here at last is the spark that was so sadly missing in the first half. Although Sravani’s attitude to her husband quickly becomes wearing, Samantha somehow manages to keep her character from being completely irritating and despite wanting to shake some sense into her, I felt that her rationale was at least constant and made sense from her character’s point of view. Poorna on the other hand was just a waste of space who didn’t take any of the many opportunities he had to turn his life around. The final piece in the puzzle that leads to Poorna’s redemption is lazy and poorly done, although again it’s Sravani who has the best of the generally weak dialogue and ends up as the only one who acts according to her established persona. 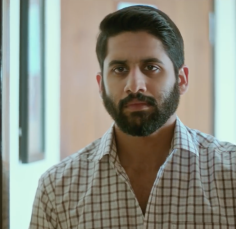 Posani Krishna Murali is brilliant as Sravani’s father and his comedy keeps the film from being totally subsumed in weepy tragedy. Rao Ramesh is also unfailingly sensible and brings some much-needed common sense, as does Suhas who shines in a small role as one of Poorna’s long-suffering friends. Subbaraju is totally wasted in the role of a small-town thug with a political agenda who has no significant part to play other than to be the ‘bad guy’ for Poorna to fight at regular intervals. This would have been a much better film without the usual Telugu commercial elements – removing the dull romance, repetitive fight scenes and glamourous song sequences and adding more of Sravani, her family and her story would have made for a more interesting film. Some explanation for Sravani’s ridiculously self-sacrificing attitude would have helped too other than the wishy-washy enduring love that is used.

Overall, Majili is disappointing. The story isn’t plausible and never comes together to form a coherent whole. The bittiness of the plot transfers to the characters, who also don’t always act in keeping with their role. There simply isn’t enough of the good parts – Samantha, Posani Krishna Murali – but instead far too much insipid romance. Gopi Sundar’s songs though are generally good and Vishnu Sharma’s cinematography captures the claustrophobic feel of the family well in the latter half of the film. I wanted to like this, I like Chaitanya and Samantha and perhaps as their first film together I expected a little too much. Worth watching for Samantha, the support cast and Chaitanya in the second half.