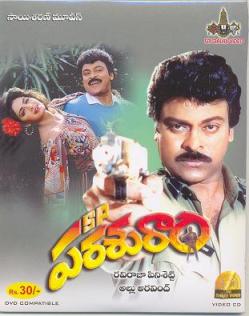 My DVD collection has grown more through whim and serendipity than any clear acquisition strategy, and I don’t always come up with gold. This is not a quality film. It probably should be something I refer to as a guilty pleasure, but I feel no guilt! I just love it for its stars, the songs, the outfits, the action, the insane plot twists and the sheer style.

The villain of the piece (played by Sharat Saxena) makes, of all things, snuff films. I really wasn’t expecting that. 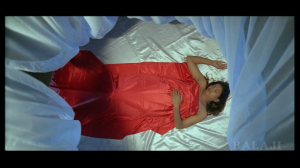 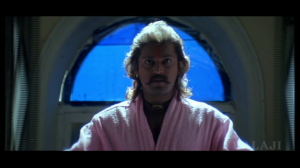 We have two girls drugged and abducted (one raped, both murdered), a confrontation between police and the murderer/rapist/blue film talent (Mahesh Anand seen  here in his fluffy pink dressing gown) and a further show down between SP Parasuram (Chiranjeevi) and Mahesh Anand resulting in the criminal being rendered comatose before the onlookers send Chiru on his way with a polite round of applause and he revs them up about social justice and eliminating corruption. That takes care of the first breathless 10 minutes. And the level of happenings rarely drops for the rest of the film. 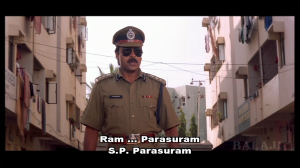 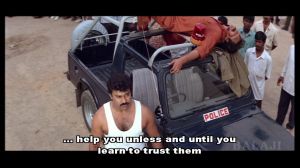 SP Ram Parasuram is the righteous cop with a wicked temper, and our hero. Sri Devi is Kumari, a petty con artist and thief. When Kumari is arrested, she spins a colourful tale to escape her cell. Luckily for us, the design team were on fire when they came up with this!

Ram lives with his father, brother and sister in a fabulously decorated mansion and seems to be the bossy one in the family. Kumari breaks in to steal from her persecutor, and perhaps to get an eyeful of this: 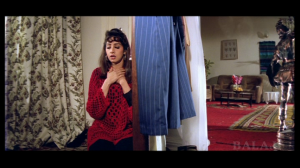 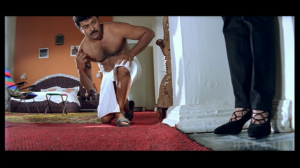 Her outfits are also quite eyecatching.

I love this song mostly because I get to see Chiru wearing a Koala print jumper. Maybe he was thinking about his Australian fan base or maybe it’s all the wardrobe guy could find.  The ankle boots, black socks and high baggy pants are not so pleasing, but it was the 90s…And Sri Devi didn’t fare any better.

The romance and action intersect when the blue film gang kidnap Kumari who escapes and runs into the only man she can trust. She can identify the gang so there is a lot of interest in shutting her up. A murder attempt renders her blind and temporarily safe as a blind woman is not perceived as a threat. If only they knew as much as I do about incredible filmi medicine they wouldn’t be so sanguine! What with providing security and seeing her and her orphans, Chiru falls under Sri Devi’s spell and they marry. It’s a quick process, as she is still bandaged around her head on the wedding day. 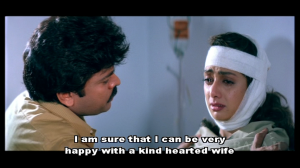 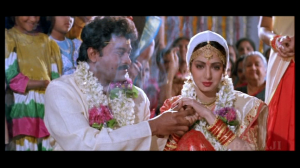 There are double crosses and betrayals all over the place, and a hefty dollop of tension as characters come so close to their doom and yet don’t quite succumb. A corrupt subordinate with a grudge (Devaraj as the sleazy Rayappa) gains advancement and Ram has to put duty ahead of personal desire. His trials don’t end there, but our hero is indomitable, using his precise manners as a weapon. Chiru almost draws blood just with the word ‘Sir’. Circumstances are manipulated to humiliate and undermine him but Parasuram never falters in his dedication although his temper is put to the test. There is some joy in his life as his marriage to Kumari is clearly happy and loving. But joy can be turned to pain and of course the baddies have another shot at eliminating the one witness that could potentially destroy them.

A poisoning attempt (spoiler – it’s unsuccessful), miraculous surgery and a the presence of a gang member in the household keep the drama dialled up to HIGH. 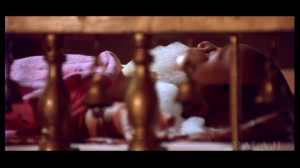 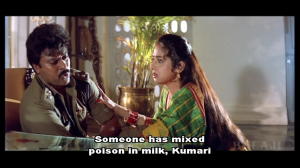 There is also a fabulous dishooming with a shoe when Parasuram is pushed too far. The final blood sweat and tear soaked bone-snapping showdown involves a runaway train and an impressive array of stuntmen flying through the air crying ‘Heeeaaaargh’. So much happens in this film!

I love Chiranjeevi and Sri Devi so seeing them together is just wonderful. I have no idea if they got along in real life, but they make a beautiful screen couple. The songs look fabulous and they both have such verve in their dancing. The relationship between Parasuram and Kumari is very affectionate and warm, and they are a lot of fun in some of their romantic and domestic scenes. The Paruchuri brothers dialogues strike the right note for this couple. Chiru is just the perfect hero for this kind of film and once again he gives an energised and committed performance. He plays the dramatic scenes with authority but also dives into the silliness in the dance scenes with some outrageous flirting faces. Sri Devi does much more than sit around and look pretty as she also enacts some pivotal scenes. She has great expression in her face and body language and the emotional range of Kumari’s character gives her ample opportunity to show off all her skills. Her charisma more than stands up to Chiru’s and the story feels quite balanced and the characters more fleshed out for having two strong performers at the core. 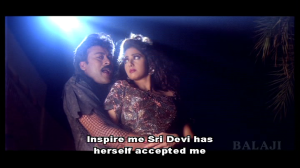 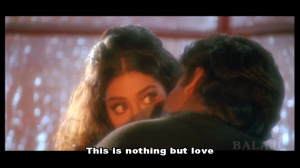 Brahmi occupies an unnecessary comedy sideplot but doesn’t take up too much time that could be better spent. The supporting cast do the needful, and Devaraj was certainly successful in being sleazy and hateful. Allu Ramalingaiah has a small role as a comedy policeman, and makes an impression in a fun scene with Sri Devi. I’ve seen more of Mahesh Anand than I wanted to (you only got the screencap WITH the dressing gown) but he was very effective as a bad bad man.

The MM Keeravani soundtrack suits the mood and stands up to the onslaught of visual delights. The production values are all up there on screen in stars, sequins and stunts.

This is a film that requires you to strap yourself in and just go with it. I love it and give it 4 and ½ stars!